Never underestimate the underdog. Rookie Kacy Catanzaro put on an incredible performance in the second episode of the Mae Young Classic 2018, with a win over the powerhouse, Reina Gonzalez. The former American Ninja Warrior competitor used her athletic background to take down a women twice her size, which is very impressive.

It was questionable as to whether or not Catanzaro would be able to hold her own, as she was tossed around the ring like a rag doll by Gonzalez. Even the announcers believed that this match was going to be lopsided and that the hard-hitting Texan would take the win within minutes. Much to everyone’s surprise, Catanzaro pinned Gonzalez for a three count and will be moving on to the next round. It was one of the most engaging match-ups on the card and showed the audience what the future of women’s wrestling can hold.

The same could not be said for all of the bouts, however. I was actually quite disappointed with the last match of Mercedes Martinez versus Ashley Reign. With their years of experience of wrestling all over the world it was one that almost put me to sleep. Even the fans weren’t really engaged, only chanting…Mercedes!…every so often. The pace was slow and needless to say, I was glad when it was over. What we can look forward to though is Mercedes’ next opponent when she faces Meiko Satomura in the next round, which should be interesting.

It was nice to listen to the commentary during this episode. I was happy to hear Beth Phoenix a little more, filling us in on the background of some of these wrestlers. There was also more talk of women’s wrestling in general, which was a nice addition that we did not have last week. With the announcers recounting the journeys of these grapplers, about their struggles and how they eventually made it to the squared circle, made us more attached to these ladies and gives us someone to root for.

One thing I did find strange though was the length of the episode. It’s scheduled to be an hour-long show and it ended only after forty-five minutes. Considering the announcement made last week that each bout was going to be fifteen minutes long, I was surprised that it didn’t last a little longer, or that they couldn’t find anything else to fill the time. Maybe a brief history as to why we have such a tournament and what it means for the future of women’s wrestling? Just a thought.

As more grapplers are eliminated and we begin to see more of these women go head-to-head, the competition will only get more fierce. 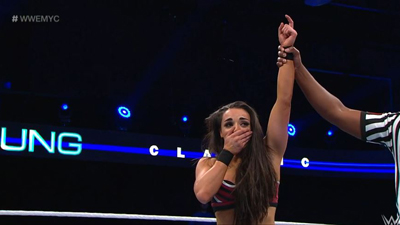 Deonna Purazzo is your winner. Photo Courtesy of: WWE.

Deonna Purazzo is known for having quite the athletic ability but she was certainly challenged the young Pricilla Kelly. Both showed their athletic ability and technical expertise and put on a good first match to open the episode. Although Purazzo won with the arm bar, Kelly was truly impressive and has a lot of potential to be a great wrestler. Well done ladies.

Aerial Monroe unleashes her sassy side right from the start, getting the crowd going. But who doesn’t like a little trash talk? Well, Zeuxis did not. Although the Puerto Rican Power got a few good kicks and submission holds in, Monroe had momentum for most of the match. Just when I thought that Zeuxis was holding back, she got herself up to the top rope with Monroe and both came crashing down, with Zeuxis clinching the win.

There’s no question that Reina Gonzalez was projected to win this match. Her size and resume gave her this reputation. Even though Kacy Catanzaro is significantly smaller, she used her gymnastic background to her advantage and was able to keep up with her brawler of an opponent. Much to everyone’s surprise, Catanzaro managed to pull out a win. With only a year of experience under her belt, this newcomer has a bright future if she continues to put in the work in the ring. Gonzalez recognizes this and congratulated her opponent by hoisting her up on her shoulders to acknowledge the crowd. 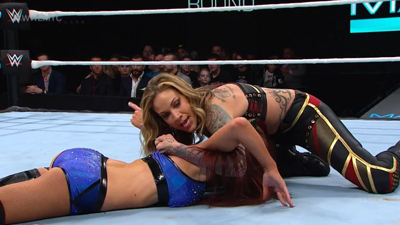 I thought it was nice to see two experienced in-ring performers go up against each other. Projected to be one of the most competitive bouts of the night, both wrestlers had equal opportunities to get in their hits and high kicks. I found that this one had a few lull moments and seemed a little slow. Even the crowd only really got into it towards the end. Probably the most disappointing match of the night, expected more from two veterans.