It’s safe to say that experience prevailed over technique and wrestling style in the opening round of the 2018 Mae Young Classic. Although this episode started off a little slow, it picked up by the end.

The best was saved for last. The crowd roared as the Yokozuna stepped into the venue and walked confidently to the ring. Meiko Satomura used her blistering strikes to take out Killer Kelly, an aggressive young wrestler from Portugal with a lot of heart and potential. Although she gave Satomura a few knocks around the ring, Kelly’s dangerous and kick-heavy method wasn’t enough to beat the Japanese legend.

The strong, hard-hitting style was the theme of the night and if any of the other women wrestlers backstage took away any lessons from this round, it’s to be prepared for anything and anyone that comes your way.

I had my doubts as the camera flashed the crowd in the opening shots. It was as if the crowd was told…Okay, now we want you to jump out of your chairs and scream with excitement! Which they probably were. It came off as a little forced but as the tournament got started it seem liked the audience was engaged. Before Nox and Zatara entered the squared circle, Michael Cole announced that each match was going to be fifteen minutes long. This rubbed me the wrong way. I appreciate that there are thirty-two participants in this Mae Young Classic but it made the tournament seem cheap, like it was timed and the wrestlers would be rushed. Being an avid female wrestling fan, it left a sour taste in my mouth. 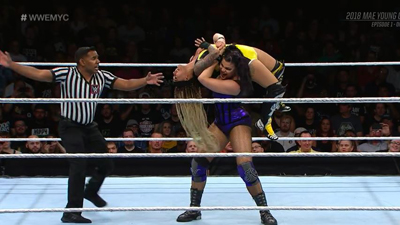 Another thing I was expecting more from was the commentary. Beth Phoenix has so much knowledge, expertise and is a legend in her own right. It would have been a pleasure to hear her opinions of the wrestlers a little more or at all for that matter. It was only the last match with Satomura and Kelly that seem to intrigue her, as this was the only time we actually heard her speak. Although this was arguably the most exciting match of the first round it was too obvious that Phoenix already had her favourites. Whether these female grapplers are able to put on a good show or not, they deserve the same respect and attention as those who have been in the game on a long time.

Overall, not a bad first round show but I am certainly looking forward to next week’s card. There is good talent again this year and most of the matches were enjoyable. I would keep my eye on the hard-hitting performers like Ripley and daredevil high-flyer like Nox. Both have the finesse and power that can take them all the way to the final. Likewise, if there are any more matches like that of Satomura and Kelly, we should be in for a good tournament and a good final at WWE’s Evolution pay-per-view in October.

These two were definitely not feeling the pressure of opening the tournament. It started off a little slow, not one being more dominate than the other. Zatara attempted to damage Nox’s right knee as much as she could but in the end it Nox’s strength came through. Not bad for a first match up, always nice to the see the underdog win, for now at least. 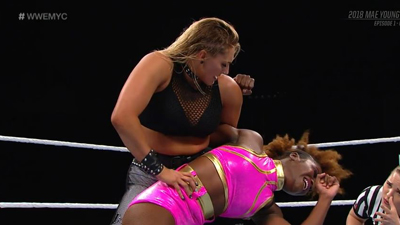 Jenkins’ confidence was not enough to pull out a win in the first round. Ripley’s high kick was so powerful I could feel the impact through the screen.The Australian powerhouse dominated the first-half of the match with Jenkins finding her little burst of energy for a few minutes. Predictably, Jenkins just seemed out of her league. The sass queen does have some potential but still needs a little more technical work if she’s ever going to face opponents who are stronger than her.

From the beginning the match was going to come down to strength versus stamina. Lane got tripped up in the ropes and nearly hurt herself but recovered nicely. The “mountain” of Kraven slowed down the pace to try and regain control but she met her match with Lane’s athleticism and persistence. This Florida-native showed how hard she’s been training and her technical skills, which was quite impressive. In the end, Lane pulled out a win and upset the crowd. She is definitely one to watch for in this tournament. 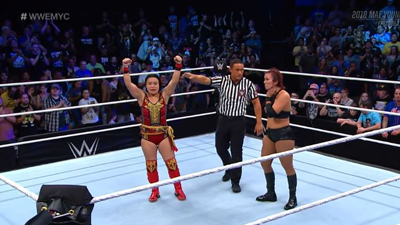 Meiko Satomura is triumphant in the first round of the Mae Young tournament. Photo: WWE.

With Meiko’s reputation and Kelly’s aggressive edge, this match was highly anticipated. It was filled with high energy and Satomura wasted no time in putting Kelly into a headlock, leaving her disorientated. Kelly demonstrated her impressive intensity that nearly gave her the win, pinning Satomura for a two and a half count. The Death Valley Driver cemented Satomura as the winner by pinfall. Her showmanship was equally impressive, helping Kelly up to acknowledge the crowd. Even though she won’t be advancing Killer Kelly definitely proved herself to the WWE universe.