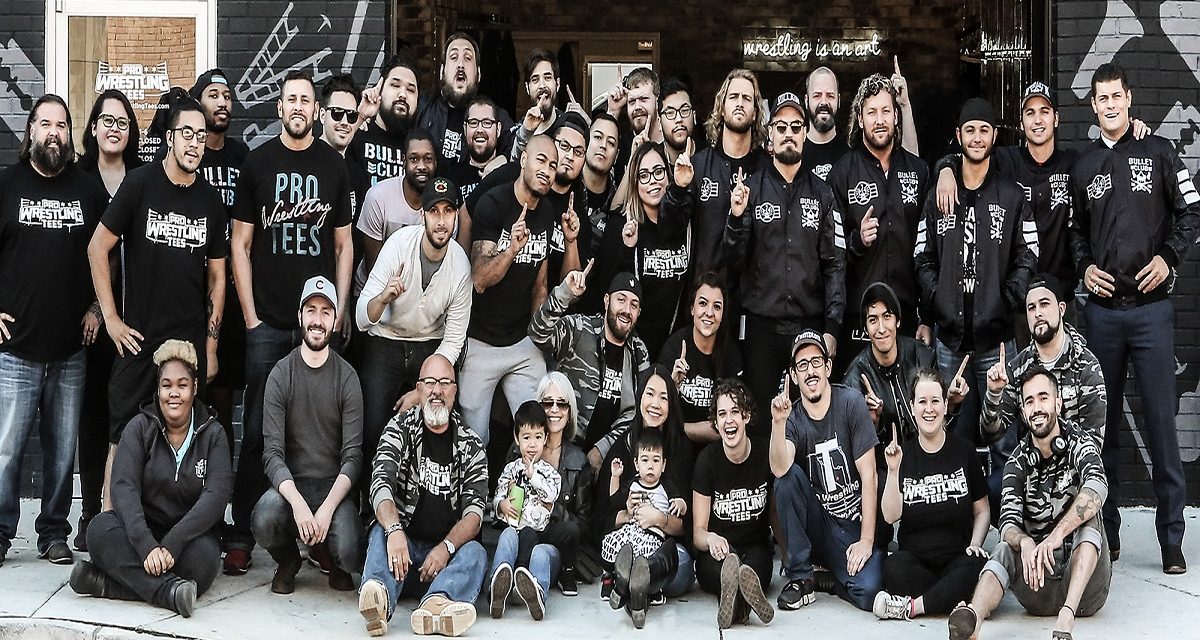 “I broke Big Show’s hand” was boldly emblazoned across the chest of CM Punk on the WWE’s Smackdown program in 2010. His loud statement about injuring the world’s largest athlete was homage to Greg Valentine’s 1977 shirt which read “I broke Wahoo’s leg.” Punk’s t-shirt was not a pipe bomb but it did start a T-shirt revolution and skyrocketed a tiny company from Chicago now known as Pro Wrestling Tees.

Professional wrestling T-shirts seem to be everywhere these days. If you go to the mall they are for sale; go to the ball park and someone is wearing one; at WWE events the crowd seems to all be Bullet Club members. The rise of the wrestling shirt has taken it from something you maybe could pick up at the matches to a piece of fashion culture. 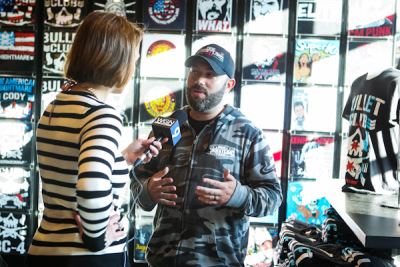 Ryan Barkan is not a name most wrestling fans would know, but if you own a wrestling-related T-shirt, there is a good chance that he made it. Barkan is the owner of Pro Wrestling Tees in Chicago, Illinois, the epicenter for wrestling-themed apparel.

He didn’t set out to make a career in T-shirts or wrestling but as a youth he routinely attended the WWE shows at Chicago’s Rosemont Horizon (now Allstate Arena) including WrestleMania 13, which featured his favourite match pitting Bret Hart against Steve Austin. As he entered college in Orlando, Florida, for website design, Barkan drifted away from the theatrics of wrestling and focused on his studies.

Upon returning to Chicago, Barkan opened a small office for his website and graphic design business. Soon a change in technology steered Barkan’s business trajectory in a very different direction.

“Then they just came out with a digital printing machine that allowed you to print shirts on demand digitally with a photograph,” Barkan recalled to SLAM! Wrestling. “So I bought one of those machines and took out a $10,000 loan from the bank and then I started printing shirts out of my store. After a year of that I decided to work only with T-shirts and I opened One Hour Tees. These machines were so fast that they allowed us to print shirts within an hour. We could print them in two minutes but it allowed us to have a quick turn-around. So I started One Hour Tees (onehourtees.com) in 2008 and we opened a small retail store and then we expanded from there.”

With his new printing machine, Barkan set out to contact every teacher in the greater Chicago area to send out information about his new company. Soon he was working with over 100 schools and it was just him in the company.

In the summer of 2010, wrestler Colt Cabana went to One Hour Tees, in his hometown of Chicago and asked owner Barkan if he could make a shirt for his friend, CM Punk, to use on television.

“I wasn’t really familiar with CM Punk,” said Barkan. “I knew he was from Chicago but I didn’t really watch any wrestling and not independent wrestling. I didn’t know Colt worked for Ring of Honor. I didn’t know what Ring of Honor was but my brothers did and they filled me in. Colt said that he was an independent wrestler and he worked with all of these other wrestlers and I could spread your name around and tell them where to get T-shirts. At the time there wasn’t really any place catering to wrestlers. Colt told me he could get the Young Bucks and Joey Ryan so he hooked us up with them and started making bulk orders. From there it turned into, ‘How do you guys sell your shirts online?’ ‘What if someone can’t make the show?’ From there we decided to create Pro Wrestling Tees.”

Barkan attended some independent wrestling shows and observed the wrestlers selling their merchandise to the fans. After some research he discovered that wrestlers usually had only the fan to wrestler interaction on weekends at shows through which to make some extra cash. 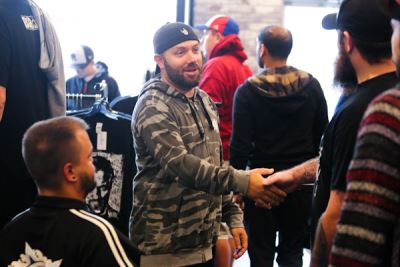 “The idea of Pro Wrestling Tees was for wrestlers to make money during the week selling merchandise because they are used to making money on the weekends selling merchandise,” said Barkan. “Wrestlers are going to sell a lot more merchandise in person than through a website as fans want to interact with wrestlers. When we started the site we set up a platform for wrestlers to sell shirts to fans all over the world but I figured the main income for our company would be them ordering in bulk and us sending it to them so when we get a sale on-line I will get a text from Matt of the Young Bucks saying, ‘This is crazy’, because they get an email notification every time they get a sale. I went to a convention and saw Scott Hall and X-Pac and they told me they loved getting those email notifications. Even if they only sell one shirt a day it is still exciting that fans have a way to support the wrestlers.”

Cabana, who helped to grow the idea of Pro Wrestling Tees, including on his groundbreaking podcast, has noticed how thankful the grapplers are for this new stream of revenue. “There have always been just a small handful of us who were able to make a living as an independent wrestler, but it’s hard,” said Cabana. “Pro Wrestling Tees has not only made it easier for those indie wrestlers to have a little more comfort, but it’s allowed a whole new generation of wrestlers to supplement their income and move them so much closer to becoming a full-time pro wrestlers, which is the dream.”

Impact Wrestling and Lucha Underground star Johnny Impact/Mundo has been very impressed by Barkan and his operation. “I feel like I’ve got a great relationship with Ryan, the guy that I deal with over there,” said Impact/Mundo. “He’s really built this thing from nothing into a behemoth. This is a legitimate business, a huge operation now. He’s handling all this merchandise. From my perspective, it’s the easiest way to get shirts made, especially if you want to try something out and not necessarily put in a bulk order.”

Canadian independent wrestler Cody Deaner has seen a tremendous change in his income since joining with Barkan’s company. “Pro Wrestling Tees is a genius idea,” said Deaner. “I know once I got on my merch game, it really changed my career and my bottom line. The guys over at PWTs are very forward thinking. They help all independent wrestlers work for themselves. Bring money in themselves. It’s awesome.”

WWE Hall of Famer “Diamond” Dallas Page has been very pleased with his relationship with Pro Wrestling Tees. “I think I was one of the first guys to sign up with them after they started putting guys together,” recalled Page. “It is a nice little monthly bonus. They are good guys and I look forward to meeting them in person when I go up there for All In.”

If you look through the Pro Wrestling Tees site you will see stores for wrestling legends (including some who have passed on), current stars, promotions and wrestling personalities. The beauty of the individual stores is that the designs are ready for a fan anywhere in the world to order and Pro Wrestling Tees does not need to have a bunch of leftover stock. They can just print off the T-shirts as the orders come in.

What are the criteria for having a spot on the Pro Wrestling Tees site? They have social media restrictions where you need to have 10,000 followers or you can pay a $75 set up fee if you don’t meet those guidelines. They have these restrictions because they would have wrestlers with 100 followers set up a store and no one would buy T-shirts. It does take time for them to set up the stores, and create logo mockups. Anyone is allowed to join the site such as wrestlers, promoters, promotions, podcasters, anything in the wrestling industry. 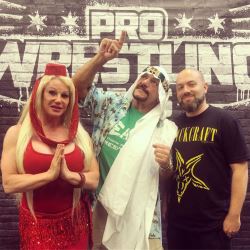 “If you are a wrestling legend and obviously older guys don’t really use computers, or if the wrestler has passed away and the family wants to set up the store we waive the social media requirements for WWE legends or anything like that,” explained Barkan.

While Barkan did say he would print just about anything on a shirt he did note that they would not make a shirt that is offensive.

Impact/Mundo has been impressed with how easy it has been to get his ideas onto a Pro Wrestling Tees shirt. “You have an idea, really all you need to do, I mean, best, give them a Photoshop file, but even if you just have a JPEG, they can usually find an artist, for a fee, to fix it so it works in the Pro Wrestling Tees mechanism.”

Barkan has even set up deals with chain stores such as Hot Topic and independent retailers around the world, notably in Japan and Canada. One of those small retailers is One World Combat Company in Niagara Falls, Ontario, run by independent wrestler Jeremy Elliot. His store is festooned with shirts featuring the Young Bucks, Bullet Club and more.

“One World Combat co-partnered up with Pro Wrestling Tees to become their Canadian distributor one year ago,” said Elliot. “Working with Ryan over the past year has been tremendous. He is very easy to work with. Whenever I’ve needed something, he has been there to help (and) always responds to emails super-fast. I’ve been a fan of pro wrestling since I was a kid watching matches with my mom and grandma, and I wrestled my first match in 2002. Expanding my store to include pro wrestling was a fantastic move and I’m happy to be giving back to an industry that has given me so many great moments & opportunities. Huge thanks to Ryan and Pro Wrestling Tees for teaming up with me, and I hope the company continues its absolutely amazing growth.”

The growth of Pro Wrestling Tees has been staggering. They now operate in a large store front with warehouse in the Bucktown neighbourhood of Chicago. From one employee in 2008 the company now employs 100 people full-time. Fans from around the world descend on their retail store especially when a wrestling personality is in town to sign like CM Punk will be doing on August 31st as part of “All In” — which Pro Wrestling Tees is sponsoring.

A fun piece of memorabilia at the store is the door that wrestlers autograph. “One of my employees, Frank, he runs the back for me, we used to have a wall inside of our shop but, when we opened up the wrestling store he said, ‘Why don’t you have them sign the door?'” recalled Barkan. “So we did and now we have at least 200 signatures on the door. Jericho, Foley, Jake The Snake, the indy guys who came through, and they put the date so we know when they came.”

After meeting so many legends of wrestling and current stars Barkan is not starstruck when a grappler walks into his store, except when the Ayatollah of Rock ‘n’ Rolla came by. “I kinda keep it cool,” said Barkan. “Chris Jericho, meeting him was cool. Him coming to the store and checking it out was very cool.”

In a few short years Barkan has helped wrestlers improve their income and has grown his company. He is still amazed at the path he has taken and how much of an impact he has had.

“It is surreal,” said Barkan. “It is pretty crazy. We went to NXT TakeOver in Chicago and at least 80% of the people were wearing our shirts. When we first started the company five years ago and I would see our T-shirts in the WWE crowd I would be so excited. It is awesome.”