Anthony Gaines catapults into the spotlight with crazy bump

It is the bump heard ’round the world! A small clip of a wrestling match was posted on Twitter and a million plus views later it is being talked about just about everywhere. The mainstream media from the United Kingdom, Canada and all of the major news outlets in the United States of America have reported on one sensational spot in a wrestling match featuring Ace Romero and the man he catapulted like a human lawn dart, Anthony Gaines.

SLAM! Wrestling caught up with, Gaines, the newest internet sensation, after a clip of his match with Romero went viral. On Saturday, June 30th at an Empire State Wrestling event in North Tonawanda, New York, the 405-pound Romero caught the 168-pound Gains coming off of the ropes and used his momentum, shoulder and ample girth to propel the young grappler high into the sky and off into the sunset. 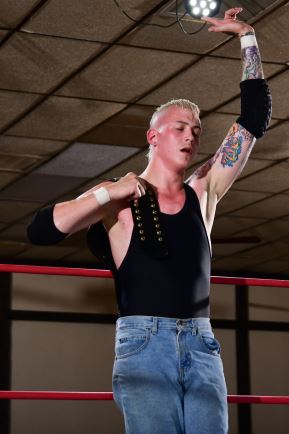 “From the aisleway leading from the ring to the stage is about 10 feet and I was thrown between 12 and 15 feet is how far I went,” said Gaines with a chuckle. “It’s pretty nuts.” To put it mildly Gaines flew out of the ring and disappeared from the screen. It left viewers to wonder, Is he alright? Did he land in the fifth row? Is he alive?

“I am feeling better than I have any business feeling,” said Gaines. “You can see that I finished and won the match and I am pretty okay.”

I demanded stiff competition and @ESWWrestling made me eat my words. pic.twitter.com/OByRsARpjw

When one is sent that high and far in the air what goes through a wrestler’s mind? “As I flew through the air I remember thinking, ‘Thank God they bought new mats,'” recalled the Cheektowaga, New York, native. “There was plenty of hang time for me to get a few thoughts in there.”

Unfortunately, when Gaines finally got his wits about him on the outside of the ring he had a dreadful realization. “I just remember one of the producers came out of the back and checked on me,” said Gaines. “I told him I was okay and then I looked beside me and I realized that I missed all of the mats and hit the hard tiles on the floor. That was a super bummer.”

Photographer Joe Hrycych was there at ringside. “I caught the impact and next thing I knew Anthony was over my head with no chance to catch it,” he said.

The next day the fourth-year professional wrestler, Gaines, posted the clip on his Twitter account and the response he received has been overwhelming.

“I thought the clip would be popular between my friends, the small group of wrestling people I know in Buffalo, and my co-wrestling people in Canada but nothing too big,” said a humble Gaines. “Then I saw that Sami Callahan shared it, Jessicka Havok and Scott Hall shared it ,and Mikey Whipwreck shared it. The next thing I know is that I am at a million and a half views. It is almost unfathomable to even think it has gone this far. The morning after that I am the number one trend on Twitter. ABC News is covering it and SportsCenter showed it and it is all very, very surreal.” 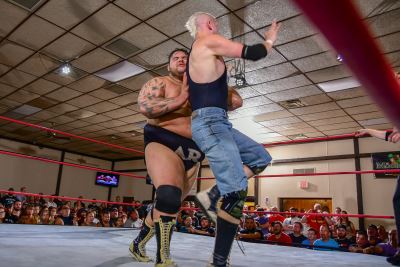 On Twitter, former ECW star Mikey Whipwreck was amazed by the event. “Nothing but respect for the spot he did the other night for @ESWWrestling. Not sure how the landing was set up (if it was at all) but it was an awesome visual!”

Former WCW champion Lex Luger tweeted the following about Gaines’ high flying: “This is one of the craziest bumps I have ever seen at a local wrestling event here in beautiful Buffalo this past weekend!!!” When Gaines thanked the former grappler for the mention Lugar replied, “I’m just thankful you’re still alive!!! That bump was ridiculous!!!”

When asked if there is a Gaines versus Romero, Round II, on the horizon Gaines was coy. “Let’s say we will give my body a little bit of a chance to heal before I look Ace Romero in the eyes again,” said Gaines. “The real question is the internet ready for a rematch? This is still at a simmer and not at a complete boil so we will let them savour this for now.”