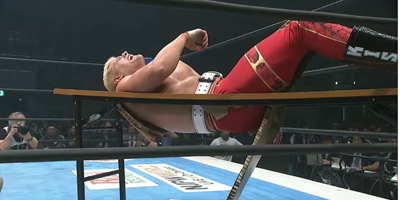 The match went to the outside early. Yujiro and Owens worked over Tsuji inside the ring and got a couple near falls. Tsuji made a comeback on Owens and got a hot tag to Umino who cleaned house on Bullet Club.

Owens hit the package piledriver on Umino for the win.

Oka overpowered Liger into the ropes and hit him as they were breaking. Oka was showing a type of aggression that the young lions do not normally display. Taguchi used his backside to work over Oka.

Nagata delivered a series of kicks to Tiger Mask. However, Tiger Mask reserved Nagata and hit the Tiger bomb. Narita and Taguchi battled back and forth and Taguchi hit the Dodon on Narita for the pinfall.

The match started on the outside with wrestlers brawling in the crowd and whipping each other into chairs and guard rails. Iizuka bit Sho in the ring and the referee tried to break them up.

Iizuka was about to bite the referee when Sho school boyed him for the win via pin fall.

Goto and Elgin locked up to start off the match and Elgin overpowered Goto into the corner and both break clean. Goto then overpowered Elgin and attempted to strike him but Elgin ducked it to take advantage over Goto.

Makabe and Ishii had a stiff series of blows exchanged. Yano took the padding off the turnbuckle and whipped Finlay into the exposed buckle. Juice hit his signature series of punches on Yoshi-Hashi and Yano attempted to grab Juice but he reversed Yano. Both Finlay and Juice dove to the outside while White and Henare fought inside the ring. White hit the Bladerunner for the win.

Everyone was shaking hands before the bell. However, when the bell rang Scurll jumped Fale from behind. Tama and Nick tagged in and Tama worked over Nick. Matt ran in to save his brother. Fale goozled both Young Bucks but they managed to escape and dropkick Fale to the ground.

Fale worked over Scurll with a series of high impact moves. Loa was tagged in and hit a one arm slam on Scurll. Scurll tagged in Nick who cleaned house on the three members of Bullet Club. Scurll snapped the finger of Fale. The Young Bucks hit more bang for your buck on Loa for the win via pin fall.

El Desperado whipped Hiromu into chairs. Suzuki-gun triple teamed Naito. Taichi choked Naito with his shirt. Sabre Jr. and Suzuki applied various submissions to Naito. Hiromu ran into the ring to save Naito from the double team. Naito who had his leg worked over just a few days ago and worked over during the majority of this match was unable to stand. Evil hit everything is evil on Kanemaru for the win via pin fall.

Chaos (Kazuchika Okada and Will Ospreay) vs. Hiroshi Tanahashi and Kushida

Tanahashi and Okada started the match and Tanahashi dove onto Okada early into the match. Kushida and Ospreay were tagged in and the pace picked up when both wrestlers exchanged moves on each other.

Okada worked over the neck of Kushida. Kushida was double teamed but he made a short comeback before Ospreay cut him off. Tanahashi was tagged in and Okada attempted to tombstone him but Tanahashi escaped and hit a dragon screw leg whip. Tanahashi applied the Texas clover leaf to further the damage to Okada’s leg.

Ospreay hit the 619 on Kushida and tried to follow up with the pip pip cheerio but Kushida locked in an armbar in mid-air. Kushida hit a scary looking DDT off the top rope on Ospreay. Okada hit a rainmaker on Kushida for the win.

Both men were attempting take downs. Cody eventually took Ibushi down and Ibushi escaped. Cody got mad and went outside to throw a chair into the ring. Ibushi threw the chair outside of the ring. Don Callis called Cody a “Machiavellian manipulator” which may be the first time I’ve heard Machiavelli’s name use on a wrestling show.

Cody went to the outside of the ring while holding his neck. Cody ran into the ring and attacked Ibushi and held his neck again. Cody performed a dive off the top rope and then adjusted his neck showing everyone that he wasn’t hurt.

The figure-four was locked in on Ibushi and he got to the bottom rope. Cody followed up with a series of moves on Ibushi. Ibushi made a comeback with a flurry of strikes and hit the golden triangle. Cody made it back to the ring and ran into the corner to hit the referee, Red Shoes.

Cody used the absence of a referee to set up a table inside the ring. Ibushi double stomped Cody on the table but the table didn’t break. Ibushi delivered another stomp, which drove Cody through the table. Cody rolled over to reveal his bloody back from the table slicing him. Cody hit the cross roads for a near fall. He followed up with Din’s Fire for the win via pin fall.

Cody attacked Omega before the bell. Cody got a table and Omega dropkicked the table into Cody’s head. The bell rang and Omega dove onto Cody and the young boys. Page hit a moonsault from the top rope to the outside.

Page delivered the rite of passage onto a table and Omega’s head started to bleed. Omega hit a snap suplex on Page. Both men exchanged moves on the outside. The match returned to the ring and Page delivered strikes to the top of Omega’s bloody head.

Page slowly worked over Omega for the next few minutes, which eventually led to Omega’s comeback. Out of nowhere Page hit a package piledriver for a near fall on Omega. Page hit a top rope swinging neck breaker for another near fall.