Welterweight Wrestling, the next big thing?

That has been a huge issue in pro wrestling for decades. Whether it was in Japan with puroresu’s sumo wrestling influence or in American promotions like WWE and WCW with their super-heavyweight stars, there have long been clear distinctions between smaller “junior” wrestlers and the established “heavyweights.”

Even in today’s New Japan Pro-Wrestling, the second-biggest promotion in the world, a junior heavyweight wrestler transitioning to the “heavyweight class” is considered to be graduating, as if they were never truly considered top stars while wrestling in a lower weight class. 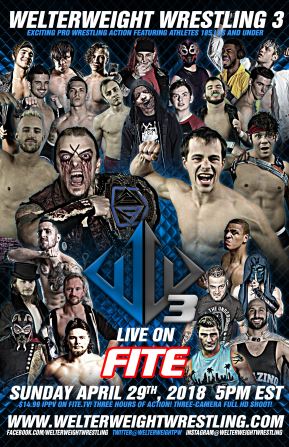 This is something that promoter and wrestling personality Joe Dombrowski held at the forefront of his thinking when he began putting together a wrestling show called Welterweight Wrestling 3, which airs on FITE TV on Sunday, April 29th, at 5 p.m. EST.

The show — which brings together 29 of the greatest wrestlers weighing 185 pounds or less — was inspired by the success of WWE’s Cruiserweight Classic tournament from 2016 and the subsequent revitalization of that division with 205 Live. However, while the former is heralded as a critical success, the latter has left many people, Dombrowski included, scratching their heads.

“The Cruiserweight Classic had so few handcuffs and restrictions, which enables the wrestlers involved to showcase who they are and why they’re so different,” said Dombrowski. “To me, it doesn’t make a ton of sense to segregate the cruiserweights in 2018, especially since there are so many stylistic similarities between the cruiserweights and the main roster wrestlers.”

This has indeed been an issue for 205 Live since its very inception. While the WWE Network-exclusive CWC allowed the cruiserweights to do things rarely seen on WWE programming, the subsequent cruiserweight matches haven’t matched the original tournament in the slightest.

Dombrowski doesn’t think that the WWE cruiserwrights of today are the same ones of the past. Those smaller wrestlers — which included wrestlers like Eddy Guerrero, Dean Malenko, Rey Mysterio and Brian Pillman — made cruiserweight wrestling something different working with each other instead against the established super-heavyweight stars. They knew their own styles wouldn’t mesh well with those of their bigger co-workers. So instead of being used as cannon fodder, the cruiserweights put together outstanding matches with one another.

This is the very same concept behind Welterweight Wrestling; it’s a platform that will enable these oft-forgotten wrestlers to showcase their skills on a major scale.

“You will have 29 of these guys in one locker room. These guys will be in a competitive environment that’s also a positive one because everyone wants to challenge themselves and put on a better match than the one before them,” said Dombrowski.

But despite all this talk about welterweights and smaller wrestlers, Dombrowski insists Welterweight Wrestling 3 will not be a “one-dimensional show” focusing solely on “bland flippy guys.” Instead, it will feature different kinds of matches that will showcase each wrestler’s own variety and skills. There will be brawlers, mat technicians, submission experts and of course, high-flyers.

While some might be willing to dismiss this as just another cruiserweight show, there is something much more important at play here: heart. Welterweight Wrestling 3 is about heart, about wrestlers overcoming the odds and fighting an uphill battle to carve out a name for themselves in the wrestling industry.

“It might not be the biggest show around,” says Dombrowski, “but it will have the hardest workers around.” Fans will get to follow a wrestler’s journey from the ground up, and will bear witness to an evolution in each wrestler’s career. This story of overcoming the odds, combined with a roster filled with different, bold and passionate wrestlers, has the potential to make Welterweight Wrestling a real success.

Dombrowski believes that this story is a major selling point for the show and will help pique fans’ interest. “It’s hard to stand out in the marketplace these days. There is more desire for content, and an easier way to get content, which means that the audience gets satiated easily.” But such a concern doesn’t trouble Dombrowski or his wrestlers, all of whom are taking advantage of a growing underground following to put on this spectacle of a wrestling show. Ultimately, however, the goal for Welterweight Wrestling 3 is for the wrestlers performing to be given a spotlight and to catch fans’ attention. 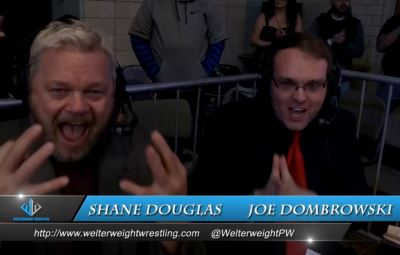 “I do strive to have the best roster of undiscovered guys and help them with their own visibility,” says Dombrowski.

Already signed for the show include Rory Gulak (brother of WWE wrestler Drew Gulak), CHIKARA alumni Ophidian and Frightmare, and Welterweight Champion Jason Gory. Furthermore, aside from a stacked card, fans will also be treated to two special features. First, Welterweight Wrestling will include a tribute to ‘Flyin’ Brian Pillman, as a lifetime achievement award will be presented to his son, Brian Pillman, Jr., who is embarking on a pro wrestling career on his own.

As for fans who want to watch the show on PPV, they will be in for a treat as well. While the crowd live in attendance will be given an intermission, the PPV audience will get to see a special match that will only air for them: a welterweight wrestling classic of sorts that will see Rey Mysterio team with Impact Wrestling’s DJZ to take on the team of CHIKARA’s Ophidian and Welterweight Wrestling Champion Jason Gory.

Once all is said and done, Dombrowski and his crew of wrestlers hope to prove that in the end, size is irrelevant if you have heart.

For more information about the event, you can visit Welterweight Wrestling’s official website at welterweightwrestling.com or the show’s Facebook and Twitter pages. The link for the event will be embedded, and those with the FITE App or FITE.TV can watch the show anywhere with either one of those services.