‘You could sense Bruno was loved by the people’ 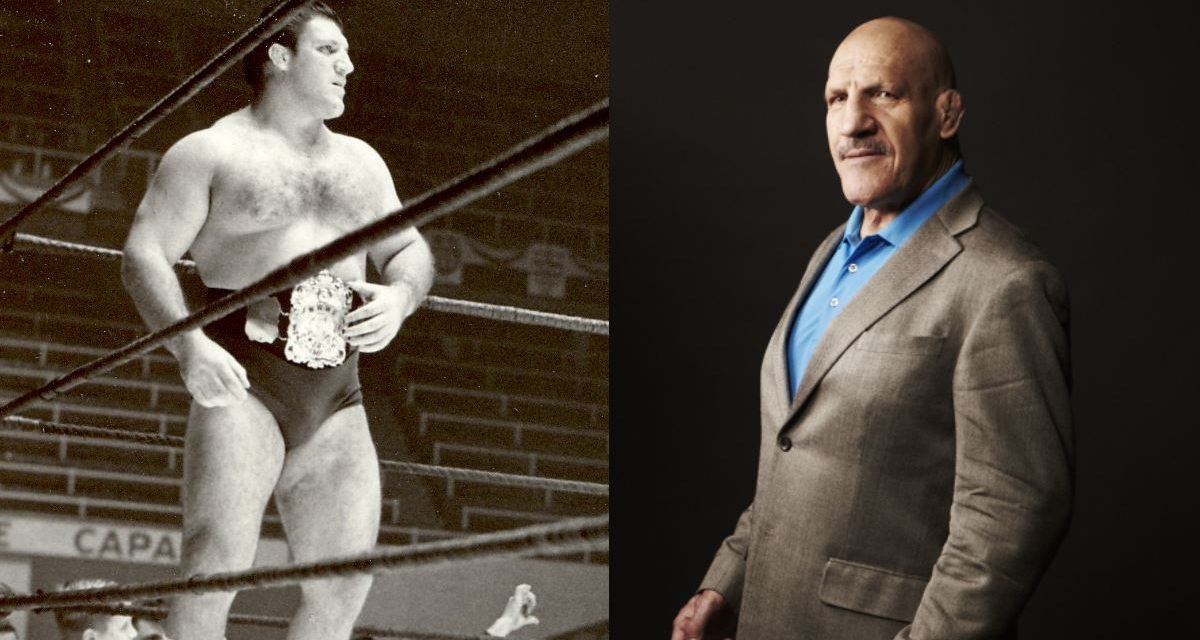 Bruno Sammartino was the Living Legend, and there was no hype about it. He put more than Buddy Rogers on his shoulder on May 17, 1963, the night he won the World Wide Wrestling Federation title for the first time. He put the WWWF on his shoulder and carried it for nearly two decades. Over the years, wrestlers and fans have put Bruno’s historical significance in perspective for SLAM! Wrestling, and here are some of their recollections:

Ivan Koloff was one of his greatest foes and the man who finally ended Bruno’s eight-year run as world champion in 1971: 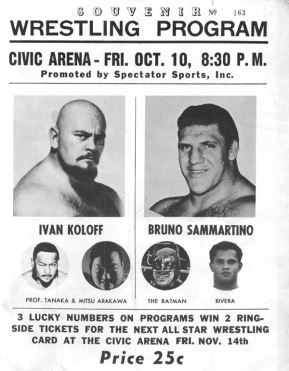 Ivan Koloff and Bruno Sammartino face each other on a card in Pittsburgh in 1969.

“You could sense Bruno was loved by the people. Back in those days, to have such a following in wrestling from an individual, you knew he had to be beloved because you didn’t sense that with all the other guys, even though the Ivan Putskis and the guys like [Verne] Gagne and that, if it was the right combination, if it was the right opponent against him, they’d draw big. But Bruno was consistent no matter who he wrestled. It seemed like sellouts. He had a big house.”

“Bruno was my hero; he’s a few years older than I am. [Note: Koloff died in 2017.] He came on the scene in the late ’50s, early ’60s when I was just breaking into the business. What a thrill that was to wrestle Bruno. Just that awe of him being Bruno. I think Vince [McMahon] Sr. saw that he wanted Bruno as his champion because not only the ethnic Italians, but he would draw all the foreign people. All of these foreign people related to Bruno because he was here from another country and did good.”

“Bruno expected you, whenever he wrestled you, he expected the guys he wrestled with, especially the bad guy, to be the general. But to me, I was in such awe, he was just my hero. I was all ears. I wanted whatever Bruno wanted.

Davey O’Hannon remembered Bruno’s hold on fans and shared a locker room with him when he wrestled for the WWWF in the 1970s:

“I was a fan before I got into the business so I went to the old Madison Square Garden on 48th Street and watched Bruno and I saw the passion that the people had. I mean, I saw people cry and scream, and it was one of the things that got me so charged up about getting into the business.”

“These people in front of us, I could hear the accent and I could hear them yelling in Italian, ‘Kill the bastard Bruno, kill him.’ The emotion was so high; it was unbelievable. The joint was shaking with Bruno in there. Bruno didn’t come in, take his time down the aisle, didn’t stand in the corner. Bruno put his head down, he walked down the aisle, he did a little warmup and away he’d go. The people were so into it.”

Paul Heyman is one of the most original thinkers in wrestling and current mouthpiece for Brock Lesnar. He was a fan when Sammartino was in his prime:

Veteran wrestler Shawn Blanchard from Pittsburgh and the Keystone State Wrestling Alliance has a special place in his heart for Sammartino:

“Bruno and Pittsburgh go hand in hand with being tough, hardworking and blue collar. My main memory of Bruno is very personal. I was traveling with Lord Zoltan {Ken Jugan), Dominic DeNucci and Bruno to Toronto in 2012 for WrestleReunion. I was going up for a mini-vacation and to enjoy myself. A few weeks earlier, I was told that Larry Zbyszko might not make it. So I packed my bag with my boots and tights just in case.” 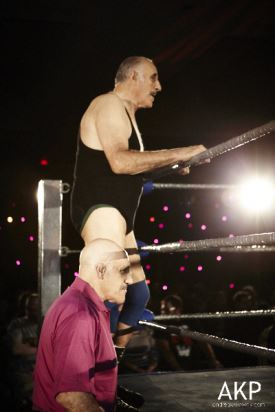 Bruno Sammartino in the corner of his long-time friend Dominic Denucci in Denucci’s last match in 2012 in Toronto. Photo by Andrea Kellaway

“We are in the car driving to Toronto and Bruno starts asking me questions about wrestling and if I was on the card. I told him ‘not yet’ and I would love to be if there was an opening. I had Zoltan and Dominic in my corner and they said good things about me and my work. Bruno gets on the phone and calls the promoter and tells him about me since Larry can’t make it. The rest of the ride was a story telling class I will never forget.”

“We get to Toronto and check in and get ready to eat. Walking down the steps to the lobby Bruno is with the promoter and they are looking in my direction. We go sit with them. A few minutes go by, and I get the news that I am on WrestleReunion. I am teaming with Lord Zoltan with James J. Dillon in our corner and we are going against Dominic DeNucci and Shane Douglas with Bruno in their corner. It was a night I will never forget! It was Dominic’s last match ever and it was Bruno’s last ‘ring interaction’ (manager role) ever. I owe a big thanks to Zoltan and Dominic, but Bruno put me over the top and sealed the deal. For that I will never forget. Also, and this is very important I would also like to thank Sal Corrente for hearing Bruno out and adding me on the WrestleReunion event. Bruno thank you for everything, not just for helping me, but for helping so many.” 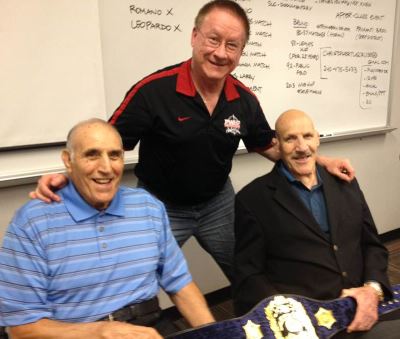 Ken Jugan liked the heels as a young fan until as Lord Zoltan he dealt one on one with Sammartino:

“I was deeply saddened to hear that Bruno Sammartino had passed away. As a young wrestling fan, Bruno ‘the wrestler’ was never one of my favorites. I always liked the underdogs or the ‘bad guys.’ As I broke into the wrestling business and got to know Bruno as a person, I got to see how well respected he was everywhere that he went.”

“I have the pleasure of driving Bruno to several events, one of which was his induction into the Professional Wrestling Hall of Fame, which was then housed in Amsterdam, New York. Bruno never let his legendary status turn him into a different person. On our trip with six of us riding in a van, Bruno climbed into the very back seat. He was offered the front seat but said that it was not a big deal and climbed over seats and people to the back. I gained a new respect for him on that trip and also on another trip to Toronto for a WrestleReunion type show where he helped Shawn Blanchard, who he had never met before, get booked to get substituted for another wrestler who would not make his scheduled commitment.”

“Bruno also agreed to make an appearance at my annual Deaf Wrestlefest event at the Western Pennsylvania School for the Deaf in Pittsburgh at no charge to the school. He also donated a replica of his belt to be raffled off at the event plus donated all money from autographs and photos to the school. Bruno did so much for charities in Pittsburgh and all over. There will never be another wrestler as honored and unique as Bruno. He had an aura when he stepped into the ring that drove the fans into a frenzy. He held the WWWF Heavyweight Championship longer than any other wrestler and that record will probably never be broken. May you rest in peace, Bruno.” 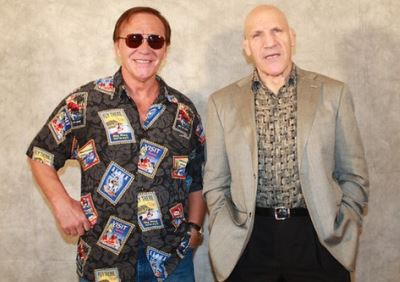 Larry Zbyszko and Bruno Sammartino at WrestleReunion in Los Angeles in 2010. Photo by Christine Coons

Tom Prichard is one of wrestling’s greatest trainers, was a top star in several federations, and has a strong recollection of Sammartino’s feud with Larry Zbyszko, when Zbyszko bloodied his mentor with a chair to set off a huge feud:

“I watched Zbyszko versus Bruno when he turned on him. They had a slow match, a TV match, a regular match and all Larry did was go get the chair and hit Bruno and Bruno bled. I got the emotion, I got the feeling, It was the fact that Bruno was so over just by his actions and by people believing in him in his honor and doing what’s right. And after meeting him and talking with him and having dinner with Bruno a couple of times, that’s him. It was real because that’s him.”

Gino Brito was a tag team champion in the WWWF during the 1970s:

“Bruno, you might say I’m partial and everything, but he was nice to everybody. He wasn’t up on that pedestal, looking down on the guys. He talked to everybody, this and that. You’d go out to eat with him, and he would pay the bill — he always wanted to be the one to pay the bill. Everyone was treated well with him, and they knew that he was the drawing card. Because Bruno was on top, you’d draw a big house.”

Greg Mosojak grew up in Bruno’s Pennsylvania stamping grounds as a wrestling fan before becoming the evil manager Count Grog and a promoter in North Carolina:

“Bruno was like a superhero to us as kids. We waited eagerly each month for wrestling to return to the War Memorial in Johnstown to see who would try to take the belt from him. But every month Killer Kowalski, Waldo von Erich, George Steele or Blackjack Mulligan would beat the hell out of Bruno but somehow he would recover and vanquish the evil doers.”

“As a kid I didn’t care that Bruno wasn’t Jack Brisco or Danny Hodge when it came to wrestling skills. He was the ultimate good guy to us. He was the local hero who made good and defended Pittsburgh from Russians, Nazis and evil Asians. It was a simpler time. But what Bruno was to us, was a mass of solid muscle. Like most of our grandparents in Western Pennsylvania, he spoke broken English and looked like any guy you would see working at the steel mill or drinking in a local bar. I am glad I grew up watching Bruno because if I grew up anywhere else I may not have ever been a wrestling fan. Thank you Bruno Sammartino for all the memories.”