The wrestling career of Terry Garvin Simms, who passed away on Saturday, April 7, 2018, is really a story about two very different personas.

Terry “The Beauty” Garvin was an effeminate, somewhat cowardly heel with long curly hair and flamboyant outfits. He would prance to the ring and insist he and his brutish partner, Mark “The Beast” Guleen, wrestle only on a customized pink wrestling mat. His appearance and style was an obvious nod to the exorbitance of Gorgeous George and Exotic Adrian Street. 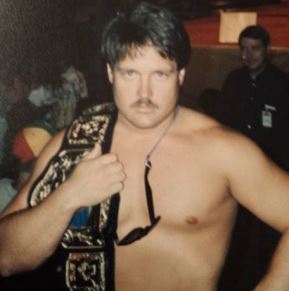 This tag team, Beauty and The Beast, irritated fans in the Tennessee and Continental territories before taking their act in 1989 to The Dallas Sportatorium and the World Class promotion that ran there. In World Class, they were managed by Buddy Jack Roberts of Fabulous Freebirds fame and were immediately cast into featured matches on the World Class cards.

This version of Terry Garvin Simms did not use the Simms family name and his typical approach to competition was to take advantage of opponents after his partner had worked them over with brute strength and power moves. Only then did “Terry Garvin” — a lookalike of Gorgeous Jimmy Garvin — engage his opponents. If the going got a little rough, The Beauty would retreat quickly to the ropes and tag in The Beast, who pretty much did all the heavy lifting for that team.

Garvin and Guleen were not in Texas long before World Class merged with USWA. After that relatively short period when the Jerry Jarrett led-promotion ran at the Sportatorium in Dallas, the Global Wrestling Federation came in to take over that building with new leadership and a new format. It was about this time that Terry Garvin was no more and taking his real family name, Terry Simms came to be.

The name was not the only change. Terry cut his hair, donned less flamboyant gear and changed his ring style and public persona to the point that he was almost unrecognizable as the same person and wrestler who once called himself “Beauty.”

This version of Terry Simms was not only a fan favourite, but his former cowardly approach gave way to an aggressive, never back down or give up hero who was not afraid to take on the biggest and baddest of opponents without hesitation. 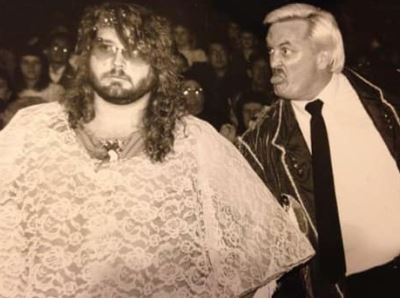 When Eddie Gilbert took over the booking in Global and working in the ring as the promotion’s top heel, he pitted himself against Global’s top star, The Patriot (Del Wilkes) and brought in his brother, Doug Gilbert, under a mask as the Dark Patriot, The Patriot’s arch enemy. But, this creative situation did not last long as Del Wilkes was offered opportunities elsewhere he could not pass up.

This left Eddie without an opponent he could feature as the top babyface in GWF. After looking over his options and in a surprising, but brilliant move, he put Terry Simms into that role. The result was a series of matches as good as any you could see in any wrestling promotion, anywhere. Gilbert’s classic heel against the “never back down” style of Terry Simms was a perfectly orchestrated angle and one that made the former “Beauty” one of the most popular stars in Global, which at the time was being seen, not only on local and syndicated TV all over the country, but every day on ESPN.

Their battles against each other finally concluded, their mutual respect for each other’s skills led to them being an unlikely tag team, competing against The Dark Patriot and his followers. The series of matches against and in association with Eddie Gilbert and with his former persona well behind him, Terry Simms solidified his place as a highly popular mainstay in GWF until the day it closed its doors.

Terry was a beloved figure both in and out of the ring. His outgoing and personable style made both fans and associates feel comfortable with him. Those of us who worked closely with him held him in high regard as a skilled and creative wrestler who consistently had quality matches with opponents of all types. As the third man in the ring for many of his matches, particularly during the Eddie Gilbert association, I know, first hand, how effective and talented he was. 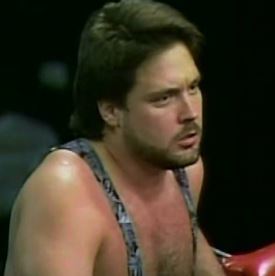 Terry Garvin Simms may never have had the high profile run in WCW or WWF/E, but he is a perfect example of a talented and skilled professional who made his mark in the wrestling profession without those advantages. In doing that, he leaves this life as highly respected by those he worked with and for and loved by the fans that were lucky enough to see him display his skills.

In recent years, with a variety of health problems plaguing him, he kept mostly to himself and close to his family in his Kentucky home. Although, at some considerable urging, he ventured back to Texas for a reunion of former working associates a few years ago and he hosted a wrestling related podcast from his home, he was somewhat reclusive after retiring from the ring. Except for a rare appearance here and there his main connection to the wrestling world, fans, and friends was through social media.

Even so, to the end he was a good friend to the many of us who enjoyed the pleasure of working alongside him. He was one of those rare guys who always gave everything he had and never failed to entertain.

Terry Simms was 55 when he died; another much too young loss to the wrestling fraternity and one more fans should know about and appreciate as a true professional and all around great person. He will be missed.

Terry Martin Simms is survived by his wife, Tammie; mother, Peggy Snowden (Ralph); son, Byron (Lauren); daughter, Amanda Cook (Michael); three grandchildren; two step-children, Casey Cahill and Ashley Mixon; brothers, Eric Simms (Julie), Jim Simms (Debbie); and a host of other family and friends. Funeral service will be conducted 10 a.m. on Tuesday, April 10, in the chapel at Hardy-Close Funeral Home 285 S. Buckman Street in Shepherdsville, Kentucky, with a burial at Brookland Cemetery. Friends may pay their respects from 4 p.m. until 8 p.m. on Monday and from 9 a.m. until time of service on Tuesday at Hardy-Close Funeral Home. www.hardyclosefuneralhome.com.

James Beard was a professional wrestling referee and creative consultant for over 30 years, working for World Class, USWA, GWF, SWS/WWF in Japan, NOW/Japan, and Big Japan, as well as a number of other wrestling organizations.