If you are a professional wrestling fan pushing 40 years of age, chances are your introduction to Donald Trump was through the squared circle. After all, Trump hosted WrestleManias 4 and 5 back to back in Atlantic City and his attendance at any World Wrestling Entertainment event was always mentioned in glowing terms. Fast forward to WrestleMania 7 and Trump’s then-girlfriend, Marla Maples, served as a celebrity guest, taking on the roles of backstage interviewer and the bell keeper for the main event. At WrestleMania 23, Trump and McMahon chose representatives to do battle with the loser agreeing to have their head shaved in the infamous Battle of the Billionaires. Trump’s wrestling involvement seemed to culminate with his 2013 induction into the celebrity wing of the WWE Hall of Fame. 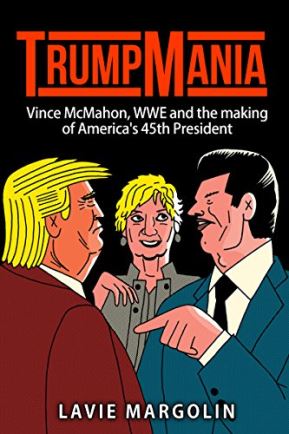 In his first wrestling-focused book, Lavie Margolin makes the case that Trump’s ties to professional wrestling and friendship with the McMahon family influenced his victory of the ultimate championship — being elected President of the United States.

In Trumpmania: Vince McMahon, WWE and the Making of America’s 45th President, Margolin wrote in the book’s introduction: “The bluster and bravado that Trump witnessed at several WrestleManias, whether from a front row seat or inside the ring, surely lent a hand to his memorable electoral debate oratories. What follows is the story, on screen and off, of the mutually beneficial business and personal relationship between Donald Trump, Vince & Linda McMahon and the WWF/WWE. No matter what side of the political aisle you sit on, it would be hard to deny that Vince McMahon had some hand in the election of the 45th President of the United States, Donald J. Trump.”

Margolin is the first to admit he is not much of a political junkie. He even admitted to not always voting. And by day he works in a career counseling advisement role for a large university system in New York. But the 37-year-old Margolin is a wrestling fan, getting officially hooked when the Mega Powers tag team of Hulk Hogan and Macho Man Randy Savage split up and went on to face each other in the main event at WrestleMania 5, thus he can’t help but be acquainted with Trump. (Full disclosure, that storyline was also this writer’s introduction to professional wrestling so yes I am pushing 40. Sigh.) This three decade long (and counting) passion would allow Margolin to make some keen observations about Trump during his campaign and victory. Margolin writes in the book’s chapter, “Candidate & President”: “During the campaign Trump utilized a familiar wrestling trope of assigning simple and memorable nicknames and buzzwords to opponents that would stick with the public. Those included nicknames like ‘Crooked Hilary’ (Hilary Clinton) and ‘Little Marco’ (Marco Rubio) and created a meme in calling Jeb Bush ‘Low Energy.'”

After Trump was elected, Margolin felt that the President’s connection to wresting deserved more exploration.

“I’m somebody that loves to do research,” admitted Margolin in a phone interview with SLAM! Wrestling. “So once I find a little lead, I will dig and dig and dig.”

After four months of extensive “digging” into over 200 resources including newspaper and The Wrestling Observer archives, Margolin had uncovered a book. But due to Trump’s unpredictability, Margolin had to keep a firm grip on his shovel. 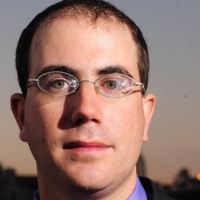 “The last chapter focuses on Linda McMahon’s appointment to the small business administration,” he pointed out. “So you would feel that you were nearly done and then Trump tweets something or something comes out about their relationship so that was constantly evolving.”

The official release of the book has its author both relieved and ecstatic.

“I’m very pleased with it,” Margolin gushed. “I’m very excited! It’s something that was probably the most ambitious project I’ve overtaken just because with my other books those are things that I’m sort of doing 9-5 every day so it wasn’t a stretch to take that into book format. But here it’s combining something that required extensive research, but coupled with my strong interest in the business and a time period in that we still don’t know what’s going to happen. Everyone wants to understand this man as much as possible. I think this sheds light on things even with the book that’s getting all the attention right now (Michael Wolff’s) Fire and Fury (Inside the Trump White House). There’s even a paragraph (in Wolff’s book) that refers to his (Trump’s) relationship with the WWE. So everyone kind of wants to understand this more.” (Margolin’s previous books focus on career counseling. He has also written several articles on the professional wrestling business for ROH World, Pro Wrestling Ponderings, The Wrestling Observer and LinkedIn.)

Margolin definitely succeeds in crafting a timely and comprehensive contribution to the ongoing Trump saga. For long-time wrestling fans, the book is a great trip down memory lane, but also a journey that offers plenty of new Trump tidbits. For instance, Margolin discusses how the WWE used its association with Trump as a means of garnering credibility. He shares that in a 1992 newspaper article for an upcoming wrestling event, wrestler Sid Justice conveniently quoted: “Our audiences are now much more intelligent. It’s no longer a redneck who comes in overalls, but people like Donald Trump come to our matches.” For those wanting something a bit more salacious, Margolin acknowledged how The Lapsed Fan podcast discovered that at WrestleMania 5, Trump’s then-mistress, Maples, can be seen sitting a few rows behind Trump and his then-wife, Ivana. For readers unfamiliar with Trump’s wrestling connections, this book will serve as the ultimate primer. 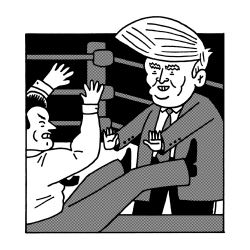 A sample of Box Brown’s illustrations in Trumpmania.

While Margolin admitted to SLAM! Wrestling that he is definitely not a fan of Trump, his writing achieves the delicate balance between not giving the current Commander-in-Chief a free pass and not talking down to those readers that may be Trump supporters. The only criticisms this writer has is that there are some formatting issues that can be distracting and while the research Margolin has done is commendable, there can be such a thing as too much research. There are sections in the book that just don’t flow with the narrative. Most notably, choosing to include the details on the scandals involving the late wrestlers Jimmy “Superfly” Snuka and Chris Benoit and a “Where Are They Now?” section come off as unnecessary.

With the book’s title and overall premise, the discussion inevitably ventures into whether Trump could have become President without his association with McMahon. While Margolin feels Trump may still have gotten elected, the relationship has undeniably informed and “helped him to stand out along the way.” “I think a President can be influenced by many different things and sometimes those things aren’t as on the radar to the public as they should be,” he observed. “So this gives us insight into this person and why he’s doing what he does and what his relationship has been with another very successful entrepreneurial family.”

But what about vice versa? Could McMahon have been successful without Trump?

“I believe so,” Margolin remarked. “But it helped to give him (McMahon) more of what he’s seeking, not necessarily what he needs. As I mentioned in the introduction, I think both of them need each other in that they both have been fairly successful in their own ways, but in some ways they are seen as jokes in some circles of society or as benefiting from their parents and their lineage and it’s hard to find validation among others. So while they are both ultra-rich and successful and famous in different ways, they validate each other.”

Margolin has not received any response from the WWE or Trump over the book. He confessed to utilizing the President’s favorite platform, Twitter, in an attempt to direct Trump’s attention to the book. While he waits for a presidential response and/or retweet, Margolin is eager take on the challenge of another wrestling themed book. In keeping with the “politics meet wrestling” theme, and with North Korea once again prominently in the news, he said he would love to write about the 1995 Collision in Korea wrestling event that featured wrestlers from New Japan Pro Wrestling and World Championship Wrestling (WCW).

Trumpmania: Vince McMahon, WWE and the making of America’s 45th President is published by H. Delilah Business & Career Press (the imprint Margolin and his wife publish under), is 228 pages, and the list price is $14.95. The book is edited by John Lister, author of Turning the Tables: The Story of Extreme Championship Wrestling, and features illustrations by Box Brown, author and artist of the graphic novel, Andre the Giant: Life and Legend.