‘Second Nature’ is a first-rate look into the Flair family

Ric Flair is known worldwide for living it up on the road throughout his decades-long career, but Second Nature: The Legacy of Ric Flair and the Rise of Charlotte, the dual-autobiography penned by Flair and WWE Smackdown! Women’s Champion Charlotte (real name Ashley Fliehr), with Brian Shields, takes fans behind the curtain.

The book is as much a story about the end of Flair’s career and the beginning of Charlotte’s as it is a story about family devotion.

Split into five sections, with separate, sometimes-alternating tales from the father-daughter team, it’s clear there are two passions for the Flairs — the family itself and professional wrestling.

Beginning with the two-time WWE Hall of Famer, Second Nature picks up where his first autobiography, 2004’s Ric Flair: To Be The Man leaves off. The Nature Boy outlines the months leading up to his retirement match with Shawn Michaels at WrestleMania XXIV, his brief stint with TNA and returning to an on-camera role alongside Charlotte on Monday Night Raw.

In between stories of coming to terms with leaving the business behind, Flair makes no bones about the fact that he was more-or-less an absentee father with his first two children, Megan and David, and that he did his best to make up for that with his younger children, Reid and Ashley. 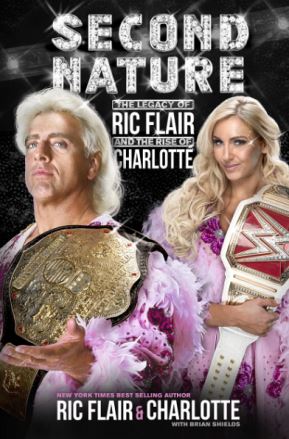 It’s clear that Flair carries around the guilt of not being there for Megan and David, but he also details how he supported Reid and Ashley at their sporting events and other meaningful moments of their youth.But most heartbreaking from Flair’s side of things, isn’t so much how he handled his life and relationships, but the inner struggle he had in helping his youngest son, Reid, try to overcome addiction. Both Charlotte and Flair spill their hearts onto the pages, revealing guilt they felt and wondering if they did enough — or said the right things — before Reid’s death in 2013.

However, Charlotte also brings to life “Reider’s” personality and charm by detailing their friendship and antics growing up.

The “genetically superior” one also is extremely candid about her first marriage and the abusive cycle she found herself in. The detail with which she explains not only the abuse, but how it affected her mentally, is eye-opening. It takes a lot of courage not only to leave that type of relationship, but to tell the entire world about it.

Near the book’s end, Charlotte details her foray into the wrestling world, how she’s living out her brother Reid’s dream and past issues that emerged with Sasha Banks and Paige.

Ending with Charlotte winning the newly reinstated WWE Women’s Championship at WrestleMania XXXII, the book sets the stage for the next era of the Women’s Evolution. A personal highlight (in spite of the fact that the book claims this era’s Women’s Championship makes Charlotte the first-ever Women’s Champion) is the nod to the sometimes-forgotten legends of women’s wrestling, such as Mildred Burke and June Byers.

This father-daughter relationship, which had its own struggles, is one of struggle, strength, redemption and family. Second Nature gives a glimpse into the passion both generations of Flairs have for their family and the wrestling business, proving that the elder is happy watching his daughter walk that aisle and that Charlotte, whose self-confidence has only grown since she began her squared circle journey, is more than capable of being far more than just “Ric Flair’s daughter.”