Chris Melendez, a self-proclaimed “adrenaline junkie,” lost his left leg with mere weeks remaining in his deployment to Baghdad, Iraq, in 2007. Forty days later, he was walking on a prosthetic. Eight months after that, he was back home. And in 2012, he stepped into a wrestling ring to fulfill his second dream.

But that first dream of becoming a soldier was Melendez following his father’s footsteps.

“My father was a Vietnam vet, so he had a huge influence on me,” said Melendez, who was stationed in Baghdad from 2005 to 2007 as an infantryman serving with B Company, 3rd Battalion, 67th Armor, 4th Brigade Combat Team, 4th Infantry Division, attached to the 1st Battalion, 506th Infantry, 101st Airborne Division. 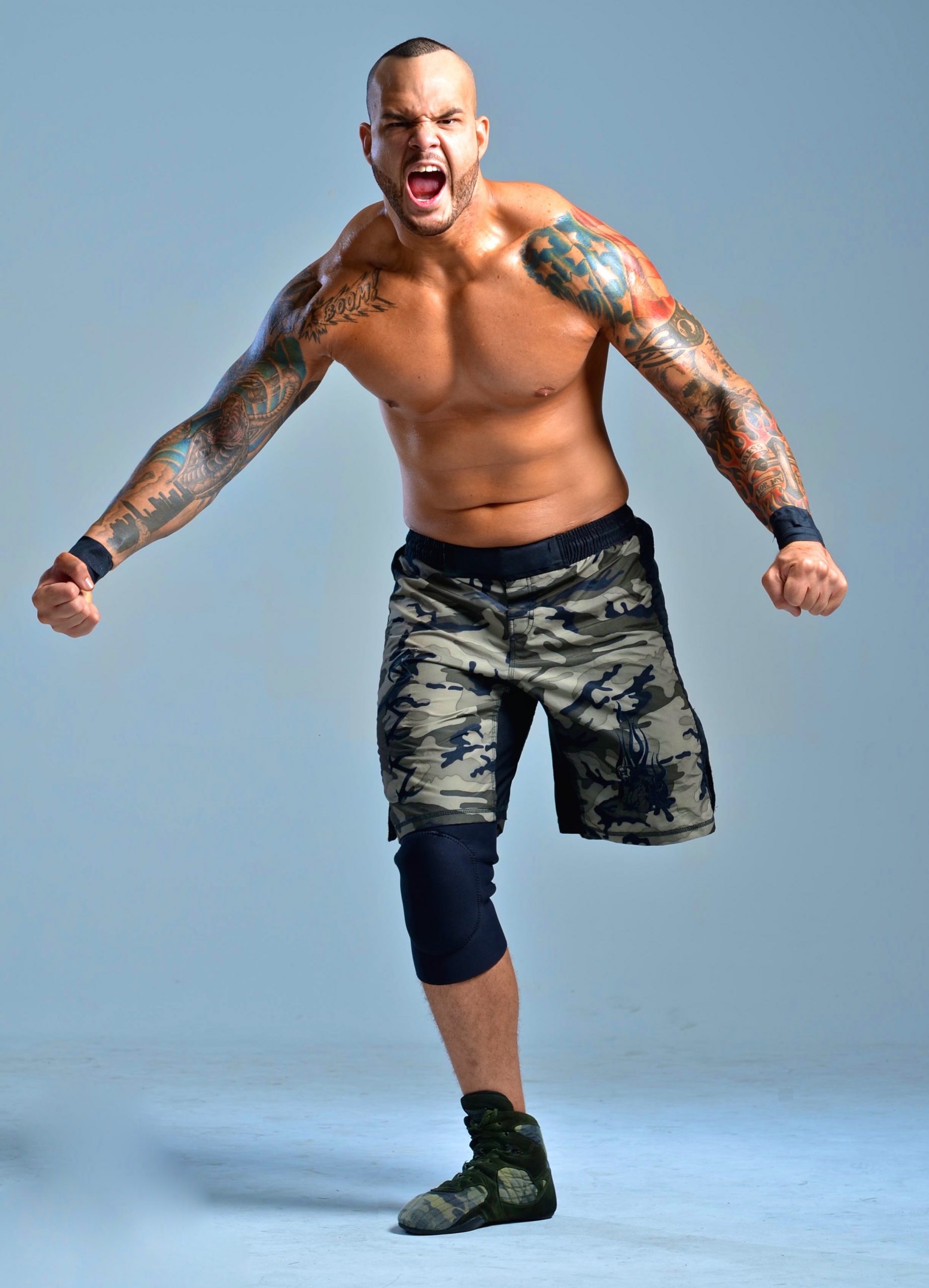 THE INJURY AND RECOVERY

On Sept. 29, 2006, with 23 days until the end of his tour, he was showing the relieving unit around in Sadr City, when his unit was struck by an explosively forced penetrator (EFP). He lost his left leg, nearly lost an arm and had a bone graft in his hip, among other injuries.

Melendez said he wasn’t “fully aware” of the situation as it unfolded, but knew his unit had been struck because it was a normal occurrence.

“[I did the] traditional pat-down of areas we’re most concerned with. I felt certain things were intact,” Melendez quipped.

But then he started to feel “a little bit faint and drowsy.” He remembered hearing his driver and seeing his own helmet — cracked from slamming his head so hard — and “seeing a boot with a uniform over it.”

“There was nobody attached to the leg,” Melendez said. “[I thought] when the smoke cleared, ‘Somebody really got hurt here.'”

At that point, Melendez said he grabbed down and “felt a warm liquid” — blood — that was “really pulsating.”

In that moment, Melendez said, he knew if he did not lower his heart rate, he would die.

“I remember having the wherewithal to really calm myself down,” Melendez said.

Melendez, who received a Purple Heart, said he “felt guilty” for being wounded, but “happy in a strange way that it was me because I knew I could handle it.”

“It was ongoing joke in military that [the Purple Heart is] the enemy marksmanship badge,” Melendez said, “but it was an honor to serve my country, wounded or not. I have no regrets. I would do it all over again.”

The single-leg amputee watched his weight drop from 230 pounds at the time of the injury to 143 pounds on a 6-foot-2 frame. He said he knew he could handle the physical part of rehabilitation. It was the emotional toll of no longer being with his unit that Melendez had to come to terms with.

“That was the part that hurt me the most… I remember sitting up at night, specifically crying for that reason,” Melendez said.

But the recovery process for Melendez was as much a mental battle as a physical one. He told himself that he would be out of the hospital in six months.

“It was rough,” Melendez said. “It wasn’t easy. I’m not going to downplay it to sound macho.”

Melendez said he started training at Team 3D Academy Sept. 1, 2012 and that “Bubba and D-Von are not the easiest people to please.”

“They took what I had and they taught me their way and polished me up and I consider them lifelong friends,” said Melendez, who was connected with The Dudley Boyz to train through Wounded Warrior Project. 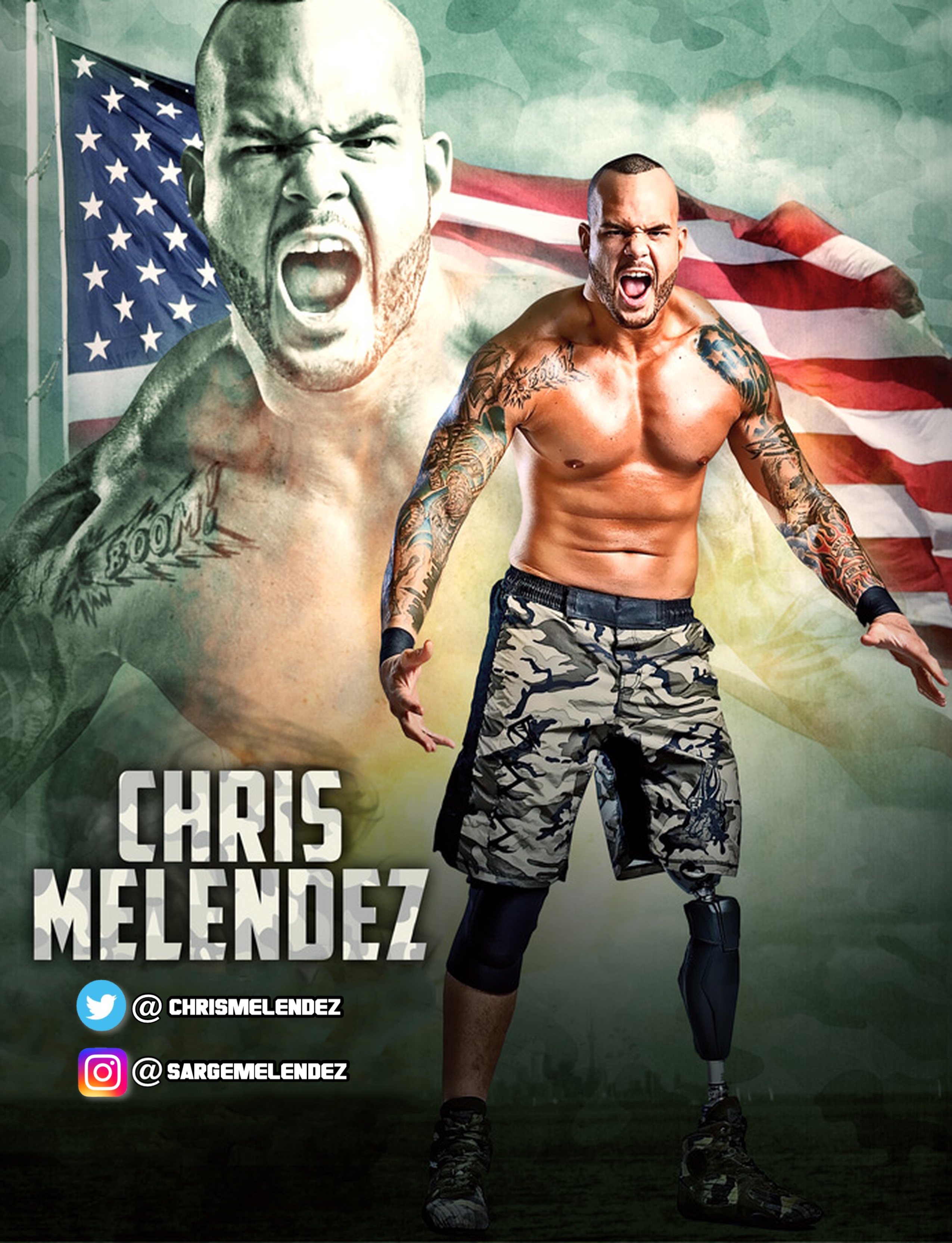 “I try to turn the stumbling blocks into stepping stones,” he said.Though his said his time in the military “was definitely cut short,” Melendez wanted to “capitalize” on the situation.

Before making his way to the squared circle, the single-leg amputee had “so many people advising [him] against it.” But he saw it as seeking something “larger than myself that I can be a part of and contribute to.”

Melendez said he questioned himself a lot — knowing he was athletic prior to his injury — but once he stepped into the ring it was practically “second nature.”

After speaking with representatives from Wounded Warrior Project, Melendez said, he “dropped everything” and moved to Florida.

“It was basically basic training all over again,” Melendez said.

Melendez debuted in TNA in 2014 in his hometown, with his father and future wife in attendance.

“It was a big deal to me because my father couldn’t make it [to my] basic training graduation… Walking down the ramp and seeing him there, it was kind of hard to hold the tears back,” Melendez said.

The single-leg amputee worked for TNA — now Impact Wrestling — for two years, announcing his separation from the company last June. 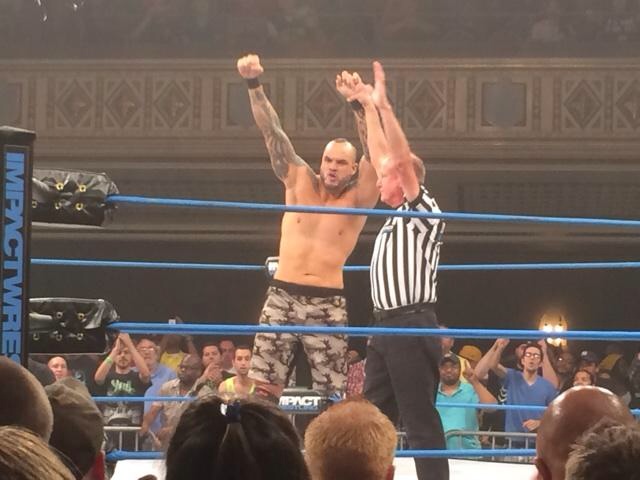 In an Impact Wrestling ring.

One of his main storylines while with TNA involved Eric Young and a match that stipulated if Melendez lost, he would have to remove his prosthetic leg. Some people said Melendez degraded himself and veterans. But the Purple Heart recipient didn’t see it that way. For him, it was a chance to set an example for children whose parents could be missing an arm or a leg.

“It was all in good nature,” Melendez said, “and I think to shine light on a negative situation instead of hiding and being upset.”

His said his time with TNA was “very interesting,” with “being so green” and suddenly on a roster with veterans who have been in the industry for 15 or more years.

Melendez said he left TNA because he said he’s “so young in the business” and felt like he was getting lost in the shuffle. “I’m far too passionate about my career to become stagnant at this point,” Melendez said.

Shortly after his TNA departure, Melendez returned to Iraq as part of an Armed Forces Entertainment tour to Kuwait and Baghdad. Melina, Scotty 2 Hotty, Ken Anderson and Hurricane Shane Helms also were part of the tour.

Going back to the place he was wounded was a “surreal and cathartic experience,” in part, because the wrestling crew landed at Baghdad International Airport on the “same exact flightline” he took a decade ago.

“I saw same exact thing. It’s amazing how much a smell can trigger memories,” Melendez said.

Though people were concerned about Melendez making the return trip to Iraq, he wasn’t.

“I felt like the last 10 years I’ve been carrying around a bag of bricks… [I could] almost physically feel a weight lifted off me,” Melendez said.