SHLAK on top of the deathmatch world

“Stupidity and self-loathing” may not drive most peoples’ career choices. But when your job involves getting slammed through light tubes, getting speared with wooden skewers, and setting yourself on fire — like it does for popular deathmatch wrestler SHLAK — there’s probably a bit of truth in that explanation. Or maybe, it’s just because he really likes it.

Regardless, it’s what SHLAK (real name Martin Jason Schacteer, though he prefers to go by Jay Shlak) does, and does extremely well, if his DTU World Extreme Championship is any indication. His win in late September in Mexico marked a highlight of his career, which has seen him become one of today’s most popular stars of the deathmatch niche. 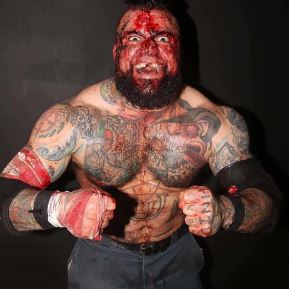 SHLAK in all his gory glory.

“I think I excel at this area,” he said during an exclusive with SLAM! Wrestling. “I think I’m beating the s*** out of the United States deathmatch circuit. I’m hoping to (do more) internationally. Japan is the motherf***in’ motherland of hardcore wrestling, so that’s the natural gravitation for me in terms of next steps.”

At 37 years old, the New Jersey native doesn’t know how long he’ll have the chance to realize that dream, but will do whatever it takes to get there before eventually hanging up the boots.

“I’m hoping to get to Japan this or next year. I’m just hoping to stay alive until then,” he said, only partially joking.

Until then, SHLAK says he’ll continue his path of destruction whenever he gets the chance. Though he says he has no thoughts of toning down his style and becoming more of a traditional wrestler.

“No, regular wrestling can get monotonous and boring,” he said, dismissing the idea. “I like deathmatch wrestling, where you get to mix it up.”

Actually, the violent style probably fits best with most of the other aspects of his life. A wrestling fan since he was a kid, he was exposed to ECW and Combat Zone Wrestling, and became a big fan of the hardcore style. As part of the grindcore/death-thrash bands like Eat The Turnbuckle and Crackhouse — whose concerts often involved SHLAK cutting himself open or setting himself on fire as part of the show — it was almost a given he’d end up putting his two loves together.

“Yeah,” he laughed. “Playing in bands, tattooing people, drinking, robbing cars, fighting bums, and sleeping on the streets. That’s who I am, that’s what I do. I’m not just a pretty face… and I’m not as dumb as I smell.”