WWE easy reader book for kids leaves a lot out

Chances are, if you have ever aspired to become a professional wrestler, you will have searched “how to be a WWE superstar.”

There are many results online, of course, including WWE’s website itself, but now there’s another result — a book.

How to be a WWE Superstar is new to the shelves, but consider this warning — it won’t do you much good unless you are just learning how to read.

The new book is from DK Books, which has done a ton of other WWE books, but it is written at “Level 2,” meaning that it is aimed at people beginning to read. 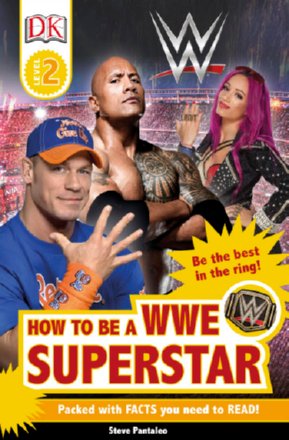 Trying to think way, way back to when I was that young, I might have found this kind of book interesting, but I was an early reader, so it wouldn’t have meant much to me pre-kindergarten, when the stars I was most familiar with were mostly puppets or cartoon characters.

I’m all for kids reading, and for a few years helped out at the local library aiding struggling readers. The goal was to find something that got them interested in reading more; with one kid, we set up our own little hockey pool so we’d read the statistics in the newspaper that Saturday morning to figure out who was ahead. (Yes, a newspaper, as I further show my age.)

So if How to be a WWE Superstar gets a kid reading more (just $2.99 for the paperback), and hopefully eventually getting their reading level up to one of my wrestling books, great! (There are other WWE books at the various “levels” which is great too, including bios on John Cena and The Rock Dwayne Johnson.)

Friends who are teachers tell me books about WWE and other subjects that get boys especially reading more are in high demand, so I’m glad this is out there.

But I can’t exactly give it a ringing endorsement, other than it’ll help kids read.

The book, written by Steve Pantaleo (WWE Ultimate Superstar Guide. Hustle, Loyalty & Respect: The World of John Cena), is naturally simplistic and WWE-centric. There is no mention of the challenge of finding a trainer (who won’t rip you off), how to get bookings, your decade on the indy scene before WWE even looks at you, or the hours and hours of time in the gym, the struggles with nutrition and diet, the injuries, or even a good background in amateur wrestling or other sports. The tempting shortcut of performance enhancing drugs is not mentioned.

It also doesn’t point out the most obvious — have a backup plan, with a good education.

But hey, there’s lots of great photos of those WWE superstars. “Look, there’s Neville doing the Red Arrow! Dad, I’m going to go practice that off the monkey bars, okay?” “Sure, son. I want you to be a WWE superstar.”

If you have a rugrat who is learning to read, and if they have been exposed to professional wrestling probably earlier than they should have been, then How to be a WWE Superstar is okay for them — as long as you sit down with them as an adult and read it through with them the first time to help bring a touch of realism to it. Wrestling is a dangerous business, but you wouldn’t know it from this book.