Hockey Hall of Fame defenceman Pierre Pilote died today, September 10, 2017. He was 85. He was also a friend of mine, and believe it or not, he was a big-time pro wrestling fan growing up.

We talked on the phone a number of times, met in person on at least a half-dozen occasions too. He wrote the foreword to my book Blue Lines, Goal Lines & Bottom Lines: Hockey Contracts and Historical Documents from the Collection of Allan Stitt.

In one of our original conversations, I asked him about participating on a Sport Advisory Council that was sponsored by Simpson-Sears in Canada around 1965. Wrestler Johnny Powers, near the top of his fame at the time, was also on the council.

Powers recalled how it started.

“I had an exercise program, a national one. Not on television, but you remember how Ted Williams was doing endorsements with Sears? Well, Simpson-Sears Canada decided they’d find a Ted Williams,” said Powers. “I became it I guess at the age of 22 or whatever, and we had a national committee, three Chicago Blackhawks, Bobby Hull, Pierre Pilote and Glenn Hall, and the Jelineks, who were pairs figure skating champions. I had a fitness line with barbells and dumbells and I designed an isometric fitness for hockey ’cause that’s Canada’s game and we went across Canada to store openings.”

The wrestling champ, originally from Hamilton, Ontario, became enamored with Pilote, and shared a lengthy story:

Pierre Pilote was a tough little guy and he looked like the Sheik’s forehead. He did gigs the hard way with a hockey stick, right? Bam! Bam! Bam! That was a kayfabe era totally, you know, so we would be in an interview with a local radio station or newspaper or whatever. The biggest star was always Bobby Hull, who was huge then right? But he wasn’t the biggest in my area because he couldn’t fill a house in Maple Leaf Gardens.

They’d boo him. [laughs] So anyway, they’d say, “Well, Johnny Powers what about the fake business?” And it still irritates me to use the word fake because that seems like you didn’t do your job and you didn’t do your job or whatever. They’d ask me if there was business involved and even then, I’d say sure, there’s business involved. There’s business involved in any business, in hockey. So you’d start off with, “Is the business fake?” and at that time I didn’t think I needed the marketing business and I’d say, “Off the record, f— you. On the record, f— you too.” “But why don’t you ask me, can I create a character? Do I sometimes pull a punch so I don’t hurt a guy and lose the next match with him or whatever? ’cause he can’t show up because he had a broken jaw. Why don’t you ask me a few sensible things instead of coming at me with a blanket statement?”

After maybe the second interview, little Pierre Pilote, he’s maybe 5-9, maybe and maybe weighs 160 pounds, 165 maybe. He sticks a finger right in the guy’s chest and says, “Let me tell you something.” Even then I was known as JP. “JP is one of the quietest nicest guys I’ve ever been around. he never brags on himself like that horse’s ass Hull over here and he’s just a cool guy to be around. If you don’t shut up and ask him nice questions, I’ll punch your f—ing head in.” He became my bodyguard. We’d walk an interview and he’d say, “OK before it starts now, let me tell you how you’re going to handle JP. Here’s how you’re going ask him the question you really want to ask him. And if you ask him nice, he’ll give you a really great answer. The answer can go on for five or ten minutes even if you want, an eloquent answer. But if you use that f-word (fake) I’m going to punch you in the head.” It was like a sitcom. I had a policeman, a little tiny policeman with a roadmap of a forehead.

Sharing JP’s comments brought back a lot of memories for Pierre, who lived in Born in Kenogami, Quebec, moving to Fort Erie, Ontario, as a young teenager, where he only then started to play hockey.

Growing up, since he didn’t play hockey, his heroes were wrestlers Yvon Robert and Bob and Paul Lortie.

“Do you know that [wrestling] was my number one sport, the number one thing in my life when I was young, around 11 years old,” Pilote told me. 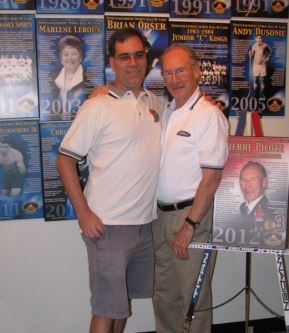 Greg Oliver and Pierre Pilote in 2012. Photo by Quinn Oliver

Though he never got to see the legendary Yvon Robert live in person, he did see some pro wrestling.

“I would see some pretty good wrestlers. In those days, I would say I was about 10, 11 years old, 10, 11, 12, because I came to Fort Erie when I was 13, but anyway, it was around that time. They would come and wrestle at Jonquière,” he explained, Jonquière being the larger region of which Kenogami was a part.

“The skating ring there always had an enclosure, not with a roof, just an enclosure, about 10-feet high, and they’d let people in, and people would sit down. I would sneak in somehow to watch the wrestling. Myself, after the wrestling match, of course, it was always in the summer, after that, I would always get somebody to wrestle with me. I’d put a blanket down on the grass and try to mimic the wrestlers.”

Pierre was enthusiastic about a lot of things, and was always fun to talk to. He kept going on the pro wrestling and the memories.

“I’m seeing myself walking down the main drag, the way they used to advertise the wrestling match was these big postcards around the telephone poles … I couldn’t wait for them to come into town … but I never paid to get in, I always made sure I was there an hour before or something.”

Over the years, there was plenty of hockey talk too, but Pierre was never a monstrous ego at all; he’d ask about you, your family, your project — it wasn’t just about him.