It’s a busy couple of weeks for everyone over at WWE. With NXT TakeOver: Brooklyn set for its third installment and SummerSlam both pencilled in for their usual place in the third week of August, the WWE will debut the Mae Young Classic — a tournament featuring 32 of the world’s best female competitors — a week later on August 28th. Triple H (Paul Levesque) described the final two weeks before September as the end of a season in the WWE, but looks forward to what this busy schedule can bring.

On a conference call with wrestling media, Triple H admitted that the WWE are experimenting when it comes to how the Mae Young Classic will air on its WWE Network. Instead of airing weekly one hour shows like it did with the successful Cruiserweight Classic one year ago, the WWE is electing to release multiple shows at a time leading up the finals which will be aired live from Las Vegas. The WWE exec said the way his kids watched TV is completely different from how the older generation is used to. 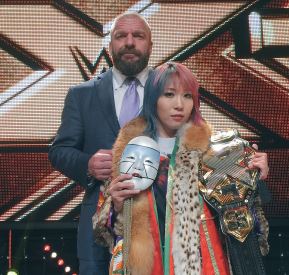 “The concept to [my kids] that something airs at a particular time unless it’s live, they don’t get it,” said Levesque, who says his kids will ask why can’t they watch it at a time more favourable to them. “It’s a different world, they’re on the internet watching things and with the Network, you have the ability to do that.”

Last year, the result of the Cruiserweight Classic was a brand new WWE show called “205 Live” which is exclusive to those under 205 pounds. Triple H gave his insight on whether he believed the women could possibly get their own show.

“The women, the opportunity is a bit different. While cruiserweights it was easy to separate them out and make their own show, with the women, you have hopefully a lot of opportunities, on Raw and Smackdown to beef up those rosters, on NXT to beef up that roster.” As long as the women are getting an equal chance to show their prowess everywhere they go to wrestle, Triple H doesn’t believe they need their own show. You can catch them exactly where the men are.

NXT has proven to be a fantastic feeding system to the main roster. When looking at the SummerSlam card, each match features at least one NXT alumni, yet the roster down at Full Sail before TakeOver: Brooklyn, is ready to put on another thrilling show.

“People say, ‘Oh they take guys from the indies and who have more experience,’ but we still have to cultivate that and teach them how to do television. But we also created the Braun Strowmans and the Baron Corbins and people that came from nothing, who had no experience.” Triple H said as he listed off more homegrown talent — “Alexa Bliss, Nia Jax, even Charlotte.”

According to Triple H it’s proof that what the system was supposed to do is working, and though some superstars may not have success right away on the main roster, he says that nothing goes the way you plan it, and sometimes you have to take them out of the environment. Jinder Mahal and Drew McIntyre are prime examples.

“When both those guys left, you say, ‘Look, go figure some things out, take your time, be ready for the opportunity because when it comes you want to be able to kill it, and they both have'”

Drew McIntyre will have his chance to kill it this Saturday when he challenges Bobby Roode for the NXT championship at the Barclays Center in Brooklyn.

Triple H explained why he was extra excited for this card.

“Bobby Roode spending this year being this dominant champion, and making it his brand, and Drew coming in as the new guy wanting to put it back to ‘We Are NXT.'”

He also explained how the likes of Asuka and Ember Moon have reached new heights, how Hideo Itami is finally ready after all the starts and stops he’s had due to his physical well-being, Aliester Black bringing something so unique to the roster, and the rivalry of Authors of Pain and Sanity being so unpredictable. Johnny Gargano is also set to kickstart his singles career in his first solo match at TakeOver against Andrade Almas.

Levesque said the “process” of NXT has always been and is still very good, and these events have a WrestleMania type feel for the superstars involved.

Triple H also wanted to give his thoughts and prayers to the “Nature Boy” Ric Flair after he was hospitalized earlier this week.