When Buddy Wayne died suddenly on June 17, Khashayar Mirzaei, who is starting to become better known under his ring name King Khash, lost the man who mentored and trained him for professional wrestling.

Mirzaei’s journey into the sport starts where he was born in Tehran, Iran, and then moving to the United States when he was 10 years old. His dream was always to become a pro wrestler and he began working on making his dream come true at the age of 18 when he started wrestling under the tutelage of Buddy Wayne. 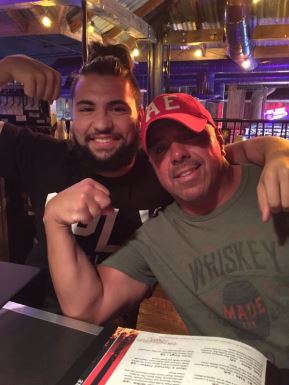 He’d actually contacted Wayne three years prior, when he was 15, after researching many wrestling schools in the state of Washington, where he was living with his mother, father, and uncle. Khash didn’t know much about Wayne; as a kid, he only watched WWE, and was unfamiliar with most of the great work Wayne — a local legend of sorts who’d toured extensively despite his small size — had done.

That all changed when Khash went to WrestleMania 30. During Fan Axxess, Khash got a chance to converse with fellow Washington native, Bryan Danielson (Daniel Bryan). Khash asked Bryan if he knew anything about Buddy Wayne, to which Bryan replied, “He’s the best!”

The process of becoming a professional wrestler started from there. Khash made a phone call to Wayne when he got back from ‘Mania and sent him some pictures of himself. Wayne told him to lose some weight and call him when he was 18. Three years before taking any bumps, Khash had already begun his journey to the pro wrestling world. Step one was to come down from 240 pounds.

“This is it, man,” Khash recalled thinking, “I love wrestling. Whatever it takes, I’ll do it.”

He did it. At the age of 18, he weighed 160 pounds and was ready to start training at Buddy Wayne’s school.

Over the years, Khash built a great relationship with Wayne. Straight from the get-go, Wayne told him training wasn’t going to be easy. He reminded Khash about all the hard work that he would need to put in to make it, but Khash reminded him wrestling is what he loved.

“He told me this is a hard business, if everybody could do it, everybody would do it.” Khash remembered back to Buddy’s wise words, “but he always believed in me. He would tell me to keep going and don’t stop. That’s something I repeat to myself every day.”

Though the wrestling ring may have given him bumps and bruises, adapting to a new country and new language early in his life gave Khash an entirely different set of challenges to face. Learning the English language wasn’t easy for Khash, who had to sit through ESL classes in school, but he persevered and speaks fluently now with almost no accent, though he admits he struggles sometimes on his promos because he naturally thinks in his native language of Farsi.

“By the time I’m trying to spit out the word I have to translate it to English. It’s really hard I’m trying to say something and I’m like, ‘Does this make sense in English?'” Khash explained, “In-ring is so easy, body wise I can manage; promos I’m trying to work on and get better at.”

He recorded his promos and watched them back. Wayne would look over them and give feedback to Khash, mainly telling him to speak more of his native tongue.

“I’d speak like 80% Farsi… but at some point, you need to speak English so people get an idea,” said Khash.

Just two years into his pro wrestling career, Khash got a chance to impress. The WWE had made its way over to the west coast and was hosting shows in Seattle, Washington, and Portland, Oregon. Through Buddy Wayne’s connections, Khash was able to land a spot as an extra on Monday’s episode of Raw in his hometown of Seattle, and on Tuesday’s episode of Smackdown in Portland. The first night, Khash soaked it all in. He remembers looking at all the performers and being astonished by their size. As he stood near the squared circle, he couldn’t help but think to himself, “I’m actually by a WWE ring!”

At the second show, things got interesting. At Portland’s edition of Smackdown, all of the extras were asked to come down to the ring and perform in front of the WWE executives. In front of Scott Armstrong, Michael Hayes, Dean Malenko, Fit Finlay and Jamie Noble, Khash got inside the ring and showed his prowess against Carl “The Catch” Cunningham in a five-minute tryout match. Cunningham was thrilled he got a chance to work with someone who he’s close to.

“Getting to be a part of Raw and Smackdown as extra talent with someone I train with is extra special. That’s what we train hard for — to one day be there,” said Cunningham, who was also studied under Buddy Wayne.

The two were able to have a solid match which caught the eye of Chris Jericho and AJ Styles who were ringside watching. Together, the former team known as “Y2AJ” complimented Khash and Cunningham on their bout. Cunningham would attest that being in the ring with Khash made him comfortable because he knew his friend was completely at home inside the ring. “Whether it’s technical wrestling, power moves, suplexes and whatnot, he makes it all look so easy.”

As the day progressed, it was time for the real test. Khash was asked to compete in a dark match against the tag team of Enzo Amore and Big Cass. His partner would coincidentally be Carl Cunningham.

“I was very fortunate to do that, that is my biggest accomplishment to this day,” Khash said. “I love it and I think about it every day, I wish I could do it again.”

After the match more of the executives and wrestlers, including Enzo and Big Cass, complimented and thanked Khash and his partner for their performance. More than anything, Khash was grateful for the experience he gained.

“These guys are huge body wise, and when you stand next to them these guys are larger than life, and I’m trying to be in the best shape of my life for an opportunity to go back,” Khash said. “There’s a lot of competition out there these days and it’s very hard but I’m giving it my all.”

Though the 21-year-old has an active schedule, he’ll always make time for pro wrestling.

“Man, I’m very busy. I work part-time. And wrestling, it’s a lifestyle, not even a full-time job,” Khash said, “I train in-ring Wednesdays. Saturday and Sunday I work shows, and If I’m not working either of those days, I either train lucha libre or just the American style, but I’m trying to learn more styles so I can be a hybrid worker. Gym four to five times a week.” 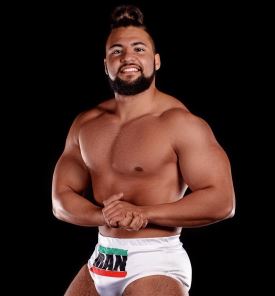 That dedication at such a young age, as well as his remarkable in-ring ability, got the attention of another veteran, Diamond Tim Flowers, and Flowers raved about the plethora of talent he sees in Khash.

“He’s going to be a superstar man, he’s awesome. I’ve never seen anybody this good, and he’s only 21,” Flowers said, “I don’t get excited by too many guys, but this guy’s good. He’s already had a bunch of dark matches for WWE. Every time they’re in the area, they call him to do dark matches.”

That appreciation meant the world to Khash. “Oh my God, man, Tim! I talk to him about four or five times a week, I don’t know what to say about him, he helps me so much, he is one of the coolest guys, and having someone like him behind you and supporting you, it’s unbelievable, I cannot thank him enough.”

Khash had a lot of support growing up as well. Though his parents were a little skeptical when he first told them about becoming a pro wrestler, they always told him to follow his dreams.

“They told me whatever makes you happy, go for it… but my mom still to this day has never been to any of my matches live,” Khash said, “because I’m the only child and she can’t see me get hurt. My dad has been to a couple shows. They’re very supportive and they believe in me.”

Though his mom will always be worried about her little boy, Khash doesn’t tell his parents too much about the business.

“I told my mom up to a point where she knows I am safe, I don’t tell them in details, I don’t like to spill the details with anybody.”

Although still young, Khash has a very old-school mentality, probably because of his mentors, and that’s why he is usually always a heel, cashing in on the old school “foreign bad guy” character. When making his entrance Khash waves a big Iranian flag, instantly attracting heat from the fans. He describes it as a simple way to get his job done.

His parents, particularly his dad, knows enough about the business to know that boos are a good thing, so when his son was hearing it from the fans, he understood. “It’s like America versus Iran. He gets it, people are fans of America because we’re in America, and I’m just trying to say Iran is better,” explained Khash.

Before ever wrestling a match for the WWE, Khash had already wrestled against former WWE talent. He’s been in the ring with the likes of MVP, Eugene, Carlito, Billy Gunn, Davey Boy Smith Jr., and the list continues. “I use them to learn the most, these guys have done it and made it to the big show, and its a very good chance for me to learn and get experience.”

Though wrestling all of those former WWE superstars was a huge achievement for Khash, perhaps the biggest match he’s had was against his mentor, Buddy Wayne.

Khash remembered back to the match and how nervous he was to take on the man who trained him for the previous two years.

It was fitting that Khash shared his favourite moment with someone who he admired and learned a lot from. Now, he hopes to take all of the wisdom, knowledge, and skill that Buddy Wayne gave him straight to the top of the pro wrestling food chain, and make the most of his potential.