Bishop’s diary: ROH knocks it out of the park

LAKELAND, Fla. — After four shows in 24 hours Friday, I decided Saturday was going to be a rest day.

Although my day was mostly clear, I made the trek 60 miles west of Orlando to Lakeland for Ring of Honor’s Supercard of Honor XI.

I came across a second row ticket for the show about a week ago and decide to snatch it up after originally deciding I was just going to buy a cheap seat.

This was not a mistake. 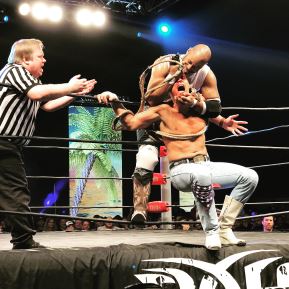 Sitting that close to the action, not to mention a show that was off the charts amazing, made my decision to trudge out to Lakeland instead of attending NXT Takeover or the WWN Live Supershow, which were held at the same time, one of the best wrestling-related decisions I’ve ever made.

When all was said and done, this surpassed last year’s NXT Takeover: Dallas as the best wrestling show I’ve ever attended in person — and that covers a lot of ground.

This show was solid from top-to-bottom, with the worst match being above average. You could tell the wrestlers were inspired by the ROH-record crowd of 2,600.

Now, I’ll begin my look at the show with this disclaimer: I missed the first two matches because I woke up late. Friday was grueling, as I described yesterday, and I slept about a half hour past my alarm and walked in the Lakeland Center as the second match was underway.

I got to my seat for the third match, which saw The Briscoes and Bully Ray defend the ROH World Six Man Tag Team Championship against Bullet Club (Hangman Page and Guerrillas of Destiny). Let me tell you, Bullet Club is very popular. It’s no exaggeration when I say about 25 percent of the crowd had some sort of Bullet Club shirt on — man, woman, young, old, it didn’t matter.

The champions retained their title in this one.

Next up was a grudge match, as Cody took on Jay Lethal in a Texas Bullrope match. Despite the limitations of such a gimmick, the two made the most of it, with a hard-hitting match that saw Lethal emerge victorious.

The final three matches of the show were wonderful.

First up, CMLL was represented when Volador Jr. and Will Ospreay defeated Dragon Lee and Jay White.

This match was athletic as you would expect, with all four men showing off their skills with all sorts of flips and dives with some great mat action built in. Volador and Ospreay picked up the win.

Next, Christopher Daniels defended his ROH World Championship (of the world) against the ever-popular Dalton Castle. These two had more of a traditional wrestling match, which isn’t to say it was boring by any means, but they had the unenviable position of following the last match. These two did extremely well mixing in some comedy with The Boys, but it was Daniels who showed his experience, catching Castle with a roll-up for the surprise fall to retain his title.

Next was the main event, a ladder match for the ROH World Tag Team Championship that saw Matt and Jeff Hardy defend against the Young Bucks.

If this was the ROH swan song for the Hardys, it was a heck of a way to go out. I think it was safe to say this was the match that drew the record house of ROH. People were excited, but once the ladder match stipulation was added, expectations went through the roof.

Somehow, someway, these four men managed to exceed those.

This was a spectacle from start-to-finish. All four men went through tables. From the ring. From the apron. From a ladder. The ability of the Bucks to take punishment is something else. Even though the Hardys admittedly have a lot of mileage on their bodies, they did not want to disappoint and busted out a vintage performance here.

After doing everything in the book, the end came as it should have: Each team was on their own ladder looking to grab the belts. The Bucks naturally superkicked both Matt and Jeff off the ladder and reclaimed their titles.

After the match, Matt Hardy proclaimed that the Bucks were the best tag team they’ve ever faced. The two teams shook hands and raised each other’s arms in salute before the Bucks celebrated with the fans ringside.

All told, Ring of Honor hit one out of the park with Supercard of Honor XI. It was a risk running a show so far from the central location, but they had an event people wanted to see and they nearly filled the building.

It was too sweet.