Phoenix music venue brings memories back from the ashes

TORONTO – The Phoenix Concert Theatre has seen a lot of history through the years — bands, dancing, parties. For a select few on Sunday, however, it was a real throwback night, as professional wrestling came to the iconic venue in downtown Toronto with SMASH Wrestling.

While the likes of The Rolling Stones, The Tragically Hip, Bob Dylan and Green Day have played there, it’s a first to have the likes of Jimmy Havoc, Michael Elgin and Tyson Dux battling it out under the lights. 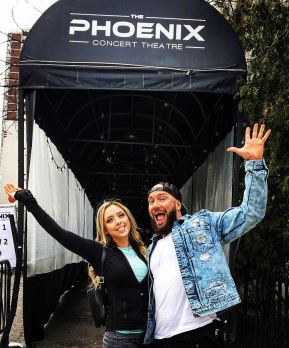 Allie and Braxton Sutter of IMPACT Wrestling outside The Phoenix on Sunday afternoon.

SMASH Wrestling began in October 2012 and has worked hard at growing over the last five years. The Phoenix had a lot of things on its list that it couldn’t have at, say, the community centre in Toronto’s west end that it had been promoting out of for the last while. At the theatre, there were huge TV screens to show the promo clips, lights and a sound system connected to the venue and not imported and hastily set up. There were staff already on hand, from security to bartenders to the taco and burrito guy. Capacity was set up for about 350 people for the show called “New Girl in Town” and all the chairs were used up, with plenty of people standing.

“A music concert hall provides that stuff for us to get to the next level, whether it’s in benefit of our online distribution or let’s say we want to do something with TV, this was the next step that was logical for us,” said Sebastian Suave, one of the key figures behind SMASH Wrestling.

But he had little history with the actual venue, unlike some of the others (this writer included).

Referee Jimmy Korderas may not have been the actual oldest person in the venue, but he was undoubtedly the oldest one to step into the ring, and had the longest history with the theatre.

“Before the Phoenix it was the Diamond Club, when I used to frequent this place. It was pretty much a dance club back then,” Korderas recalled. “They did have live bands and stuff like that, but I never showed up for them. I was what we used to call a G.I.D., which is a Gino In Disguise. Yeah, I used to rock down here with my Firebird and hang out.”

A hour or so before fans were allowed in, Korderas found himself looking around and picturing how the show would go, having been the for a couple of concerts through the years, including Alannah Myles.

“It’s actually kind of cool now that I look around and actually get to it set up now,” he said. “I don’t know if it’s been done here before, but if hasn’t, I’m surprised. It’s a really cool venue for wrestling, set up very well, it’s very intimate. I like it.” 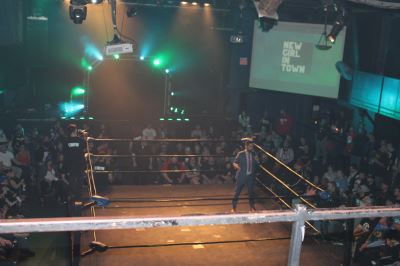 The ring seen from the balcony. Photo by Greg Oliver

Before she was Cherry Bomb or Allie, Laura Dennis was a regular on the dance floor.

“The Phoenix is very special to me. I used to listen to Live to Air from Edge 102 every single Saturday night during my teens, and going into my 20s I was here every Saturday,” said the current IMPACT Wrestling star. “This was the place to be. They had rock music, it was only one of the bars in Toronto that played rock music, music I actually liked. To be able to perform here, you would have never convinced me that I would be wrestling in this venue; if you would have said that to me 10, 15 years ago, I would have laughed at you. But to be here is just so magical, I feel like I’ve come full circle, it’s so neat.”

Anthony Ruttgaizer, who is known as manager Kingdom James around here now, got a double whammy, returning to the Phoenix on his birthday, April 9th.

“It’s been at least 20 years since I’ve been in here,” mused the normally bombastic braggart. “During my early 20s party days, this is one of the places that we used to come. This was a great place. And being here now is weird. It’s smaller, it seems smaller to me, but it’s also well lit right now.”

He’s pleased that SMASH Wrestling is at the Phoenix, returning again on May 14th.

“A venue like this is great. You’ve got all the lights, you’ve got all the sound, you’ve got space for merch and you’ve the bars for people to come and enjoy a little liquid adult refreshment while they’re enjoying the matches,” Ruttgaizer said. “I’m really hoping this place works out, and not just because it’s so close to where I live.”

There’s a photo of Greg Oliver at the Phoenix Concert Theatre hanging in his office with Gordie Johnson of Big Sugar at an album release party many, many moons ago. Greg is the Producer of SLAM! Wrestling and can be emailed at goliver845@gmail.com, and you can follow him on Twitter @gregmep.