Brock Lesnar is without doubt the most dominant athlete to ever enter a WWE ring. He dominated amateur wrestling before becoming the youngest WWE champion in history before returning in 2012. Since coming back to the company, Lesnar has been an unstoppable beast and a new three-disc DVD set, Brock Lesnar: Eat. Sleep. Conquer. Repeat., aims to chronicle his career. 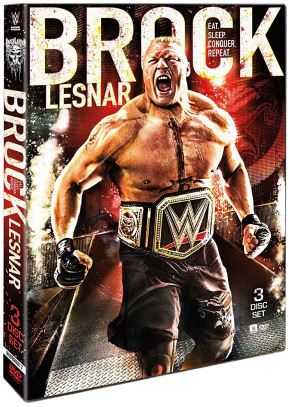 Right off the bat, fans will enjoy witnessing some early footage of Lesnar’s days in OVW before bursting onto the scene in WWE as the ‘Next Big Thing’ in 2002, under the tutelage of Paul Heyman. Some of his early matches were pretty tough to watch, but he grasped the concept of sports-entertainment very quickly and became one of the best in-ring performers of his generation.

An early, rare un-televised bout with the late WWE Hall of Famer Mr. Perfect is an interesting watch which highlights Lesnar’s skills just before heading to the main roster. There’s also some nice comments from Lesnar on his opponent, in which there was obviously a close bond between the two.

The most disappointing aspect of this DVD set are the interview portions, which have become a staple of WWE’s documentaries recently. Yet here there’s pretty much none. If you’ve already purchased or even seen his last release, 2012’s Here Comes The Pain, then there’s really not a lot of new content added here other than some of his newer matches. Most of the interviews used have been taken from the previous DVD. Another disappointment is there are no talking heads, which is a shame as there could have been some good soundbites from Jim Ross (who hired Lesnar when he was vice president of talent relations for WWE) or long-time manager Paul Heyman about their relationship. Even some interviews with family members of Lesnar’s (as has been the case with WWE’s recent documentary treatments) would have provided back story and substance.

Another disappointment, although it should have been obvious is there’s no mention or footage of Lesnar dethroning the legendary Randy Couture for the UFC heavyweight championship. It might have been nice to see some images and Lesnar mentioning this. Especially seeing as WWE recently worked with UFC to allow Lesnar to return for the one fight against Mark Hunt.

His monumental return in 2012 is covered but again it’s got a ‘half effort’ style approach. Lesnar has been involved in some of the biggest and most brutal matches and moments, most of which are included in this sett, including his brutal classic with CM Punk from SummerSlam 2013, and his WrestleMania main event with Roman Reigns. However, WWE for some strange reason doesn’t decide to interview Lesnar about these contests.

Overall, Brock Lesnar: Eat. Sleep. Conquer. Repeat. is disappointing, even if you are the most hardcore fan of Lesnar, there’s nothing really new here only some match preview video packages from events and contests from his return since 2012 that previously weren’t included on his previous DVD.

I’d suggest only adding this to your collection if you have cash to burn.