Tucked away in British Columbia’s Okanagan Valley is a successful wrestling promotion that packs the joint again and again, yet turns all profit over to charity — almost $100,000 to date. Organized and well-run, big names have come in and kept in touch, and local wrestlers vow to clear their schedules to be a part of it.

The promotion is run by two Kelowna businessmen, Mike Chisholm and Mike Rizzo, and started up in October 2013, as a bit of a response to the typical fundraisers in the area. Located in mid-British Columbia, the beautiful Okanagan Valley is full of retirees and those who are seeking outdoor adventure. Money is raised for charity through organized walks and golf tournaments. Both Rizzo and Chisholm have ties to pro wrestling from the past and thought a show would be “an alternative-type fundraiser,” said Chisholm, who was such a WWE fan in the past that he attended three straight WrestleManias. 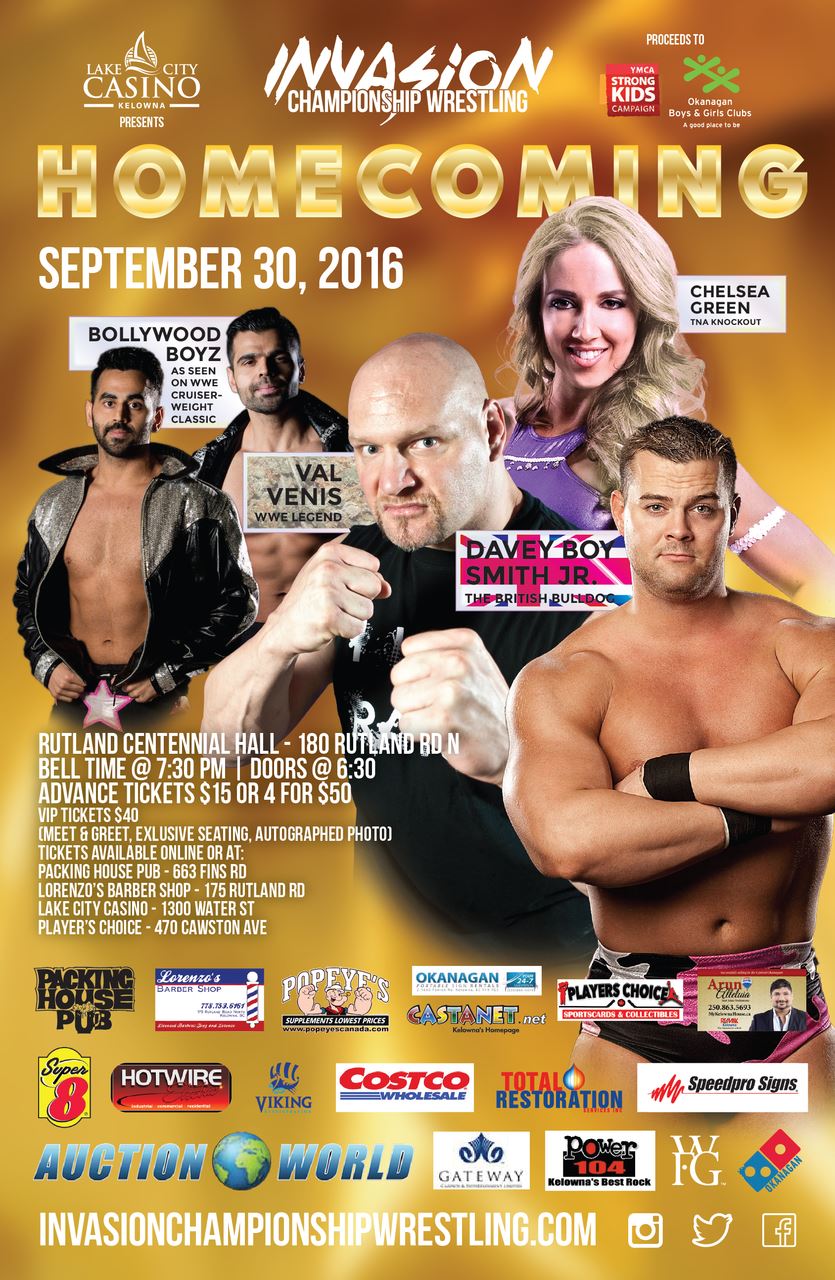 It was Rizzo who had the connections to make it happen. Once upon a time in the 1980s, he served as a ring boy for the Vancouver-based All-Star Wrestling. Many of those friendships still exist to this day, especially to ICW booker Tim Flowers.

“I’ve been at the business end of Invasion, but as things have been moving forward, I’ve been learning a lot,” said Chisholm. “Tim handles the day to day wrestling part of the show.”

Chisholm has enjoyed the experience too. “It’s fun and it’s a blast — I love sitting beside Tim on his right hand, watching the monitor behind the curtain, listening to him critique the matches and talk about the psychology of the business. There’s no more fun of an evening for me.”

But he also recognizes that wrestling is not a logical career move from the businesses he runs, or for Rizzo to give up his job as the manager of the local Costco. “There’s no money in it,” said Chisholm. “At the end of the day, it does not pay the bills. Rizzo and I both have families. We do this with our time, and this is our way of giving to our community, or one of the ways we gave back.”

Instead, ICW has created a promotion that runs a couple of shows a year that has become “a non-denominational promotion,” said Chisholm. “There’s no politics in our dressing room.” Given the long-running battles between ECCW and All-Star Wrestling in the province, that’s saying something.

Charities on the receiving end of donations have included Okanagan Boys and Girls Clubs, Mamas for Mamas, the YMCA, and the North Okanagan Neurological Association.

This weekend, ICW has two shows: “Homecoming” on Friday, September 30th at Rutland Centennial Hall and “Wrestleville 2016” on Saturday, October 1 at the Vernon Recreation Centre. Former WWE star Harry Smith, now going by British Bulldog Jr., is in for his first ICW shows, while Val Venis is returning as a headliner. The Homecoming theme is a tribute to three B.C. stars who have been on previous ICW shows and are now breaking out on a bigger stage. There’s Harv and Gurvinder Sihra, the Bollywood Boys, who were a part of WWE’s Cruiserweight Classic tournament and have been back to NXT since the competition, and former WWE Tough Enough competitor Chelsea Green, who is currently working in TNA.

“We’re really looking forward to doing the shows this weekend. The Okanagan has been one of our favourite spots to work in and anytime you can help out the community, it makes it even that much more special,” said Gurvinder Sihra. “Mike Rizzo, Tim Flowers and the entire team always put on amazing, standing room only shows. We’ve had some of our most memorable matches there as well. Working with Jeff Jarrett, Val Venis and Charles Wright. It should be another great weekend of action packed wrestling.”

The connections Chisholm and Rizzo have in the community have helped run the promotion on a “shoestring budget.” Enough sponsors are lined up before the first ticket is sold, and they do their best to arrange for hotels and food for their wrestlers. On Monday, a well-attended press conference in Kelowna featured most of the local media.

Both promoters are a part of the show too; Rizzo acts as a heel manager, and is great at getting the fans mad, while Chisholm is “a utility player” who can be a figurehead general manager or a ring boy.

“The most we’ve gotten from this thing is a case of leftover beer after the show,” said Chisholm. “We’re going to do this as long as we’re having fun”