New Sapolsky series starts off with a Gargano gem

Kayfabe Commentaries has just released a new series called “Gabe Sapolsky’s Next Revolution” and it features Johnny Gargano. There was only one problem: I was not familiar with Johnny Gargano.

Readers might wonder how a wrestling writer could not be familiar with such a talented wrestler. Well, a six-year absence is the best explanation. During my time off, I tried to follow WWE from a distance, but had been removed from most of the wrestling scene. At first, I didn’t think I would be the right one to review this, but in the end, shouldn’t that be part of the goal, to educate about Gargano? After all, most casual fans are probably unfamiliar with Gargano, so they might even find the story more relevant to them.

I must begin by saying I am a huge (or yuugee as Donald Trump or Bernie Sanders might say) fan of Sean Oliver and Kayfabe Commentaries. In my previous writing stint, I had reviewed several of their productions. The concept of this new series is that booker Gabe Sapolosky sits down with a talent he worked with and they review their history together and some of the important matches. The matches are shown and Sapolsky and the wrestler are shown on a smaller screen watching the match and giving their feedback. Like other Kayfabe Commentaries series, it is a creative approach.

Sapolsky had previously done a Kayfabe Commentaries production rebooking WWE’s relaunch of ECW. After watching that DVD, I left thinking Sapolsky had a competent booking mind. After watching this latest production, I left impressed with Sapolsky’s mind in general. I like the way he thinks. He is very observant, and he notices subtle actions the wrestlers take in the ring and explains the reasoning behind decisions. Explaining why they went with a pinfall instead of a submission during a match in China, Sapolsky notes that there was concern that the Chinese fans might not understand a submission finish. If you want to know the reasoning behind the details of a wrestling match, you will find this production educational.

The production begins with Sapolsky and Gargano describing the beginning of their relationship. Gargano had e-mailed Sapolsky to express and interest in wrestling for the company Sapolsky was booking, Dragon Gate USA (DGUSA). Sapolsky wanted Gargano to send him a YouTube link of some of his matches. After watching Gargano’s work and seeing something in him, Sapolsky had an opportunity for Gargano. DGUSA only had six matches on a card, so spots were limited. However, DGUSA ran special bonus matches at the beginning of shows for fans who paid for premium tickets. Sapolsky offered Gargano a spot in one of these bonus matches along with a warning that the payoff would be very small if there was one. Gargano accepted and received a $50 payoff. 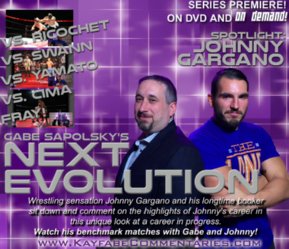 A major red flag went up when Sapolsky said that even though it was an opening match, he told Gargano there was no holding back and they believed that opening matches did not have to hold things in reserve for the benefit of the later matches. Wrestling cards are built in a strategic way to build to a crescendo. The opening match is generally quite basic because the wrestling company does not want to wear down a crowd. One of my objections to many of the independent promotions is that there is no pacing. If every match contains numerous high spots, it numbs the audience and makes everything seem less important. This red flag played into some of my preconceived notions of what DGUSA would be like.

The first match shown is Gargano’s first match in DGUSA. Known as a “Fray” match, two wrestlers would begin with a new wrestler entering the ring after a set interval. The first two wrestlers in the match look very “indyriffic.” Gargano instantly stands out when he enters the match, as he has a very strong physique and the look of a wrestling star. The wrestling action is completely ridiculous for an opening match. The wrestlers seem to use everything they had, as if were the WrestleMania main event. Also, the match is very long and way too exhausting as an opener.

Gargano’s next match shown is a match against CIMA, a major figure in Dragon Gate from Japan. Sapolsky explained that it was a major expense to bring in someone from Japan, so it was a big deal for Gargano to get the match. Gargano tells a neat story about exchanging Facebook messages with CIMA before the match. While it is more grounded than the first match shown, it is still way too much. There are just way too many false finishes. Gargano admitted that at the time he would do things, but not have a reason for them. It was noteworthy that Gargano remembers all of the painful bumps in the match.

The third match is Gargano’s Open the Freedom Gate Championship victory over Yamato. They wrestle at a facility known as B.B. King’s in Manhattan. The setup is very unique, as fans are sitting on a stage that was elevated to the same height as the ring apron. Compared to the earlier matches, the pacing of this match is much improved. You can actually see Gargano develop as a wrestler throughout the production. I will note that the lighting is very bad, a common issue for independent wrestling promotions.

Throughout the production there are little interesting anecdotes. In this case, Sapolsky explains that the event was fully catered and that the chicken wings were very tasty. DGUSA would eventually lose the facility because the fans did not make enough food and drink purchases. Sapolsky also discusses how his life changed at the time because he became a father. It was a challenge to be a new dad, while still being creative and keeping a wrestling company afloat.

Gargano took great pride in being the champion and actually walked around the city after the win with the belt. Being the champion meant being the go-to-guy for the company and doing countless podcasts and interviews. It was evident that Gargano had all of the qualities a promoter would want in a champion and that Sapolsky appreciated Gargano’s hard work.

My first reaction to the fourth match shown against Rich Swann was that it looks like a scene from a wrestling video game. They literally wrestle in the alley of a night club in Jacksonville. Graffiti is written on the wall next to the ring. Much to my amusement, Sapolsky also compares it to a wrestling video game. I really felt sorry for the wrestlers to have to wrestle in such a filthy environment. They get dirty when thrown outside the ring.

Both Gargano and Sapolsky demonstrate strong wrestling minds during this match. Sapolsky remembers wishing that a thunderstorm would start to add to the visual of the match. Gargano explains his thought process and how he learned to tone things down. Having liked his look and athleticism, my only criticism in the first two matches was that he did way too much. His self-awareness about the issue told me he got it.

The final match is between Gargano and Ricochet in Beijing, China. There are several entertaining stories about their experience in China, including Sapolsky recounting how many lobsters he ate at the buffet. Because the crowd is different than an American crowd, the wrestlers had to adjust and have an older style match. It is actually the best match shown because of it.

Chinese people do not regularly see professional wrestling, so they only accept a slower paced, more realistic style. If anything, it shows how fake and removed from reality American wrestling has become. The secret to making wrestling popular again is treating it seriously and having a more realistic style. Gargano said they basically had to wrestle a 1980s style match instead of an “internet style” match. There is no money in the “internet style” matches and they are the reason many fans have given up on wrestling. Perhaps wrestlers should pretend that every audience is a Chinese audience.

Sapolsky actually mentions several times that he now favors a more realistic, mat-based wrestling style instead of the “flip, flop, and fly” style associated with many independent promotions. Since Sapolsky is a major player in the non-WWE wrestling community, it gives me a reason for optimism.

It should also be mentioned that Ricochet is the most impressive athlete I have ever seen in a wrestling match. I actually replayed portions of the match because I could not believe a human body could move like that. If you have not watched a Ricochet match, look him up. You will not be disappointed.

So what conclusion did someone with no knowledge of Johnny Gargano reach after seeing this production?

Johnny Gargano is the real deal. Immediately, I thought he had the look of a wrestling star and his look has improved over time. His facial expressions were excellent even in the early matches. Gargano has all of the athleticism necessary to be a top wrestler and obviously has the right attitude and personal attributes. The most important thing Gargano must remember is that less is more. Gargano demonstrates his self-awareness and seems to understand the need for such self control. Johnny Gargano has all the tools and I look forward to following him on NXT and what I am sure will eventually be the main WWE roster.

Matt Johnson is returning as a writer after a nearly six-year hiatus. I got “the itch” again and e-mailed Greg Oliver. Luckily for me, Greg was receptive and actually had an assignment for me. Follow Matt on Twitter as removes the cobwebs from his account at @mattjohnsonSLAM. E-mail Matt at [email protected].