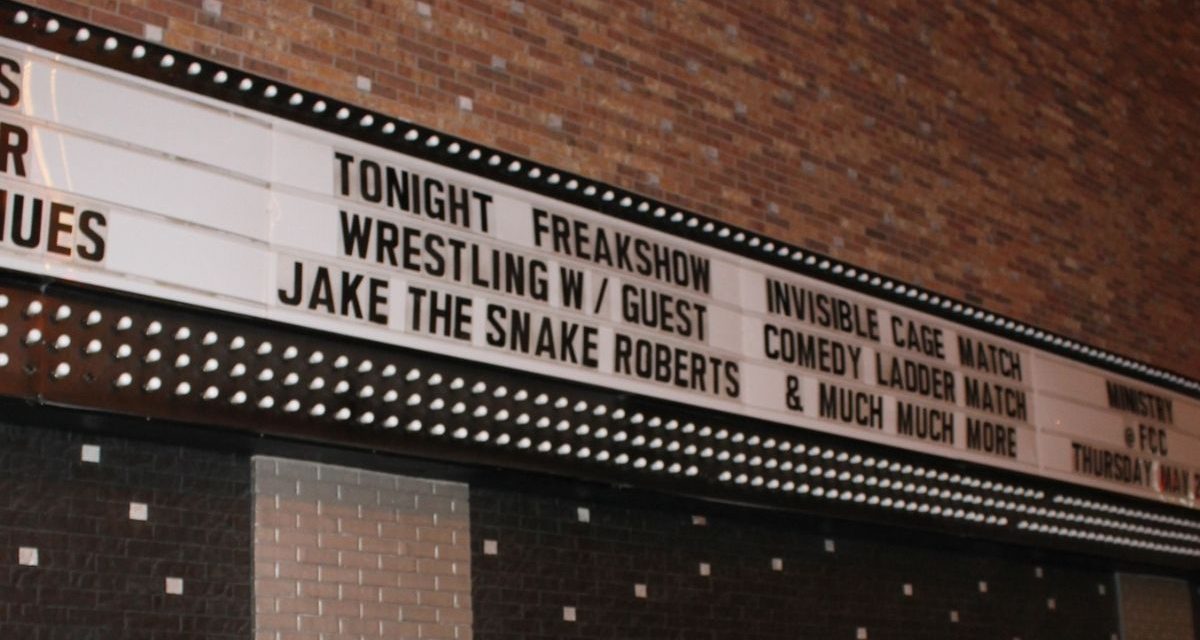 LAS VEGAS – Freakshow Wrestling is about so much more than the mind of Sinn Bodhi. The various players that come and go, some local and some from further afield, are charged with making his out-there notions come to life. A number of personalities — in and out of character — shared their thoughts when SLAM! Wrestling hung out before the show in April, just after the conclusion of the Cauliflower Alley Club reunion. 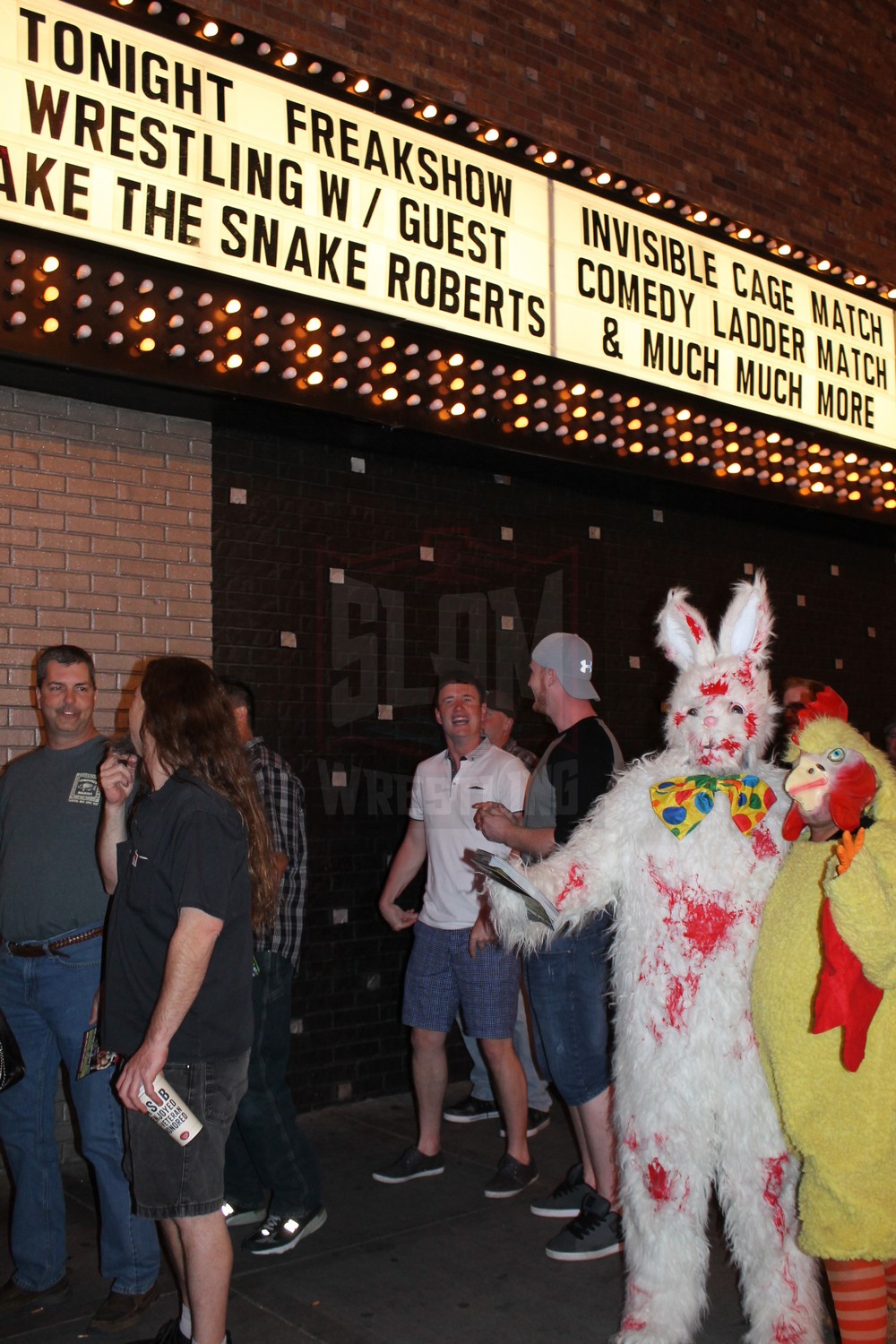 If there’s a bloody bunny and a chicken outside handing out handbills and directing you to the show, then you’re probably at Freakshow Wrestling. Photos by Greg Oliver

Dave Boyce was in Las Vegas from Nova Scotia for the Cauliflower Alley Club reunion. Established Maritime wrestler Markus Burke hooked him up with Sinn Bodhi. “I talked to Sinn a couple of weeks ago, and he asked what I was willing to do. I said, ‘Practically anything.’ He said, ‘That’s perfect,’ and told me just to show up. They dressed me up and here I am,” said Boyce, who was sweating in the bunny costume, and drew plenty of looks from tourists around Freemont Street as he wandered around handing out leaflets about the show that night. He was pumped to be a part of Freakshow, in any capacity. “I was a fan of it anyway. I used to watch it online” 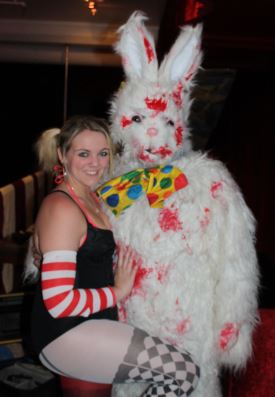 Maddison Miles was also part of the Nova Scotia contingent at the CAC who also ventured over to Freakshow. Bodhi told her to come to the show regardless, that they’d use her if they needed need. “Now here I am dressed up as a Harley Quinn character,” laughed the young superfan turned wrestler. She admitted that she didn’t know Harley Quinn from the DC Comics universe very well “I know one of my buddies is, so I sent her a picture, ‘Look at this!’ She was super excited.” She researched Freakshow a bit beforehand. “I’ve watched matches here and there. The midget ladder match tonight I’m pumped for, that should be pretty interesting.” 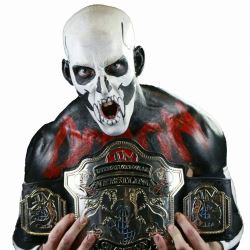 The 34-year-old Funnybone knows how to stay in character. “I am the Father of Filth, the original nightmare, your Demon King, Funnybone. I am the Freakshow champ, the one and only since day one, five years running.” Come on, who is the person behind the persona? “When I’m not pretend fighting in tights, my day job is I am the ruler of the underworld, as told by the Demon King Funnybone. I have many, many minions, most of them are direct bloodline. I also have two wives, and that’s a shoot, I have two, which is twice as much as most people. … “I’m not concerned with legal here … I do whatever the f— I want because I’m the goddamned demon king.” He has had a long-running issue with Sinn Bodhi. “I lost a bet to Sinn Bohdi and I’ve been his slave since then … He’s an awful master. He’s an awful person in general. He makes me touch his no-no spots on every other Thursday.” 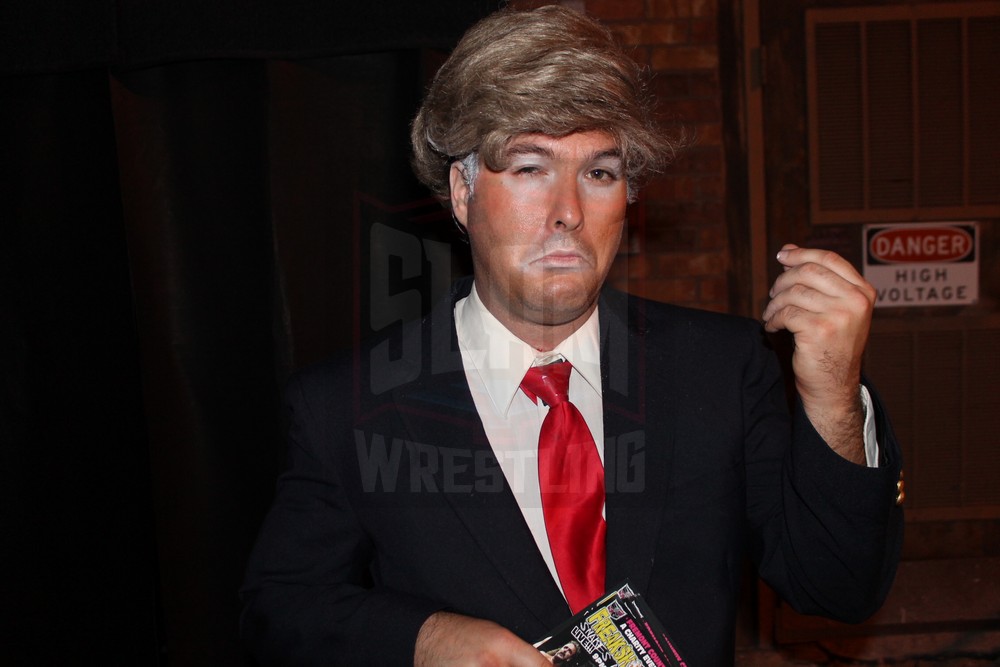 Like Funnybone, the Donald Trump that was at Freakshow in April was only able to be Donald Trump. Why was he there? “I know wrestling, there’s nobody better at wrestling than me, let me tell you. And I’m going to become President of the World tonight, believe you me. It’s going to happen. It just is.” What kind of background gets a potential U.S. President booked at Freakshow? “My background is a beautiful behind. I sit on it sometimes and I let the ladies touch it for money.” 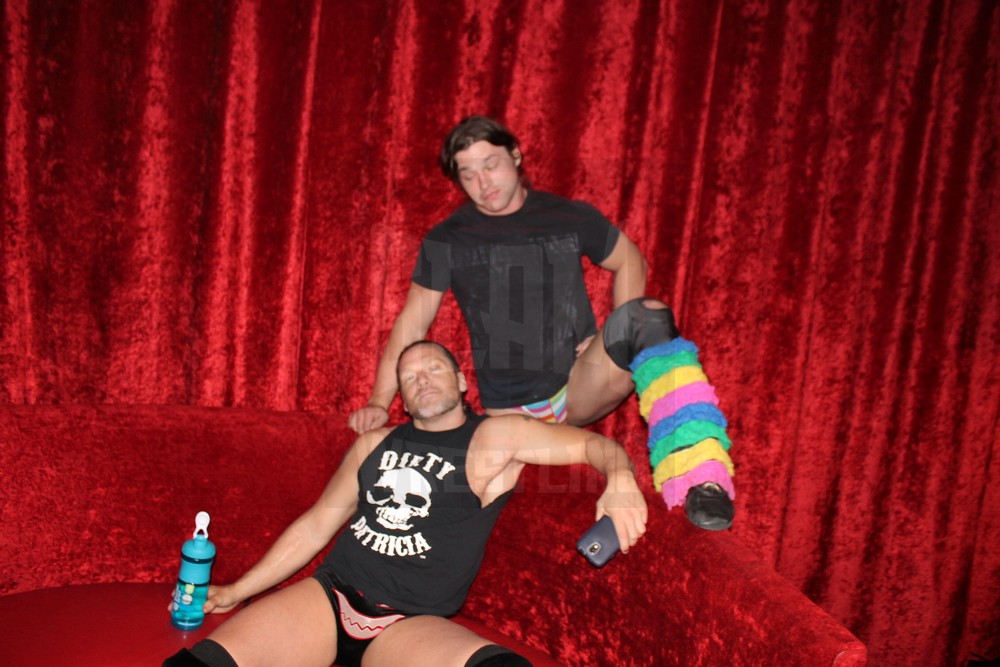 Alberta’s Bobby Sharp has carved out a good career, and has worked across Canada. After the CAC, he took part in Freakshow, and tried to explain his character. “I am a homosexual Nazi supporter or sympathizer, whichever way you want to look at it. I am very, very excited for tonight, very excited to portray, have fun and entertain,” he said about five hours before he was scheduled to be a part of the show, so he was not quite done up in full gimmick. He’d been taking in the Freakshow Wrestling experience for the first time. “It’s still got that base of wrestling, but it’s an opportunity to be a different character, and pull yourself out of your normal routine and try some new, exciting things.” 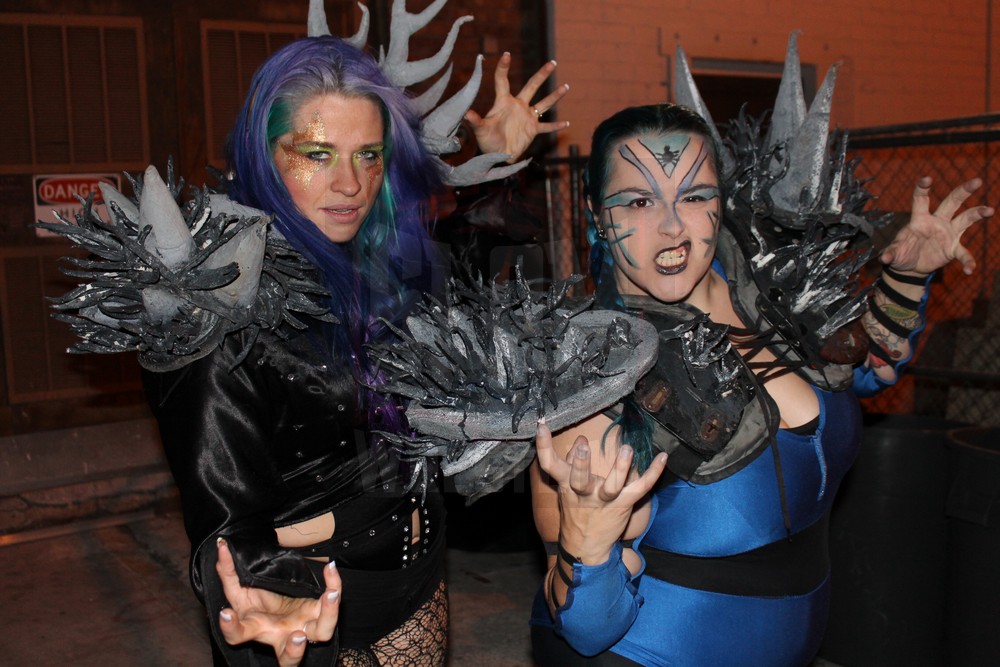 The Legion of Womb — Kat Von Heez and Kikyo Sloan.

THE LEGION OF WOMB

Thrown together tag teams are nothing new in pro wrestling. This evening, Alberta’s Kat Von Heez, fresh from a couple of days at the CAC, was at her first Freakshow event, and paired with Kikyo Sloan, a veteran of the California wrestling scene, as The Legion of Womb. The duo are exotically-dangerous, if that is a proper term. They are wearing intimidating shoulder spikes created by the same genius who makes the outfits for heavy metal showmen GWAR, and their faces are heavily made-up. Both look like they would rip an average citizen to shreds just for fun.

“We’re the Legion of Womb, kind of Legion of Doom meets Synergy from Jem and the Holograms,” said Von Heez. “We’re just these really ridiculous, mean, powerhouse-type women that just don’t put up with crap and beat the crap out of every girl, is kind of what we’re going for today. I think it’s got a sexual aspect to it.”

Kikyo has worked the gimmick before, with a different partner. “I like to call ourselves Twat and Vaginal, because we’re the Legion of Womb. We’re just so powerful. It’s a Legion of Doom spinoff thing, and instead of ‘What a rush’ it’s ‘Oooh, what a gussshhhh.'” Yet, the in-ring action can often go in a different direction. “I get to be stupid. As much as it’s a big, bad-ass, ‘Grr, I’m scary and I’m powerful,’ I still do a bunch of stupid crap and make everybody laugh.

Von Heez figured there would be a lot of knowledge returning with her to Canada. “What I take back is character-building, because a lot of, including myself, a lot of people have a hard time coming out of their shell and really exploring their character and their persona, and developing that character and feeling comfortable. So in an environment where there’s a bunch of wacky personae, you really can’t go wrong. It’s like improv, you just kind of go with the flow and see what works for you, and it gives you the opportunity to really see if you can develop your character, feel comfortable with what you’ve got. I feel like that’s something that you wouldn’t always get at another show, because a lot of the other shows focusing on wrestling, wrestling, wrestling, wrestling, and a lot less on character development. If you really try something outrageous and fall flat on your face, it’s more stand-outish than it is at a show like this.” 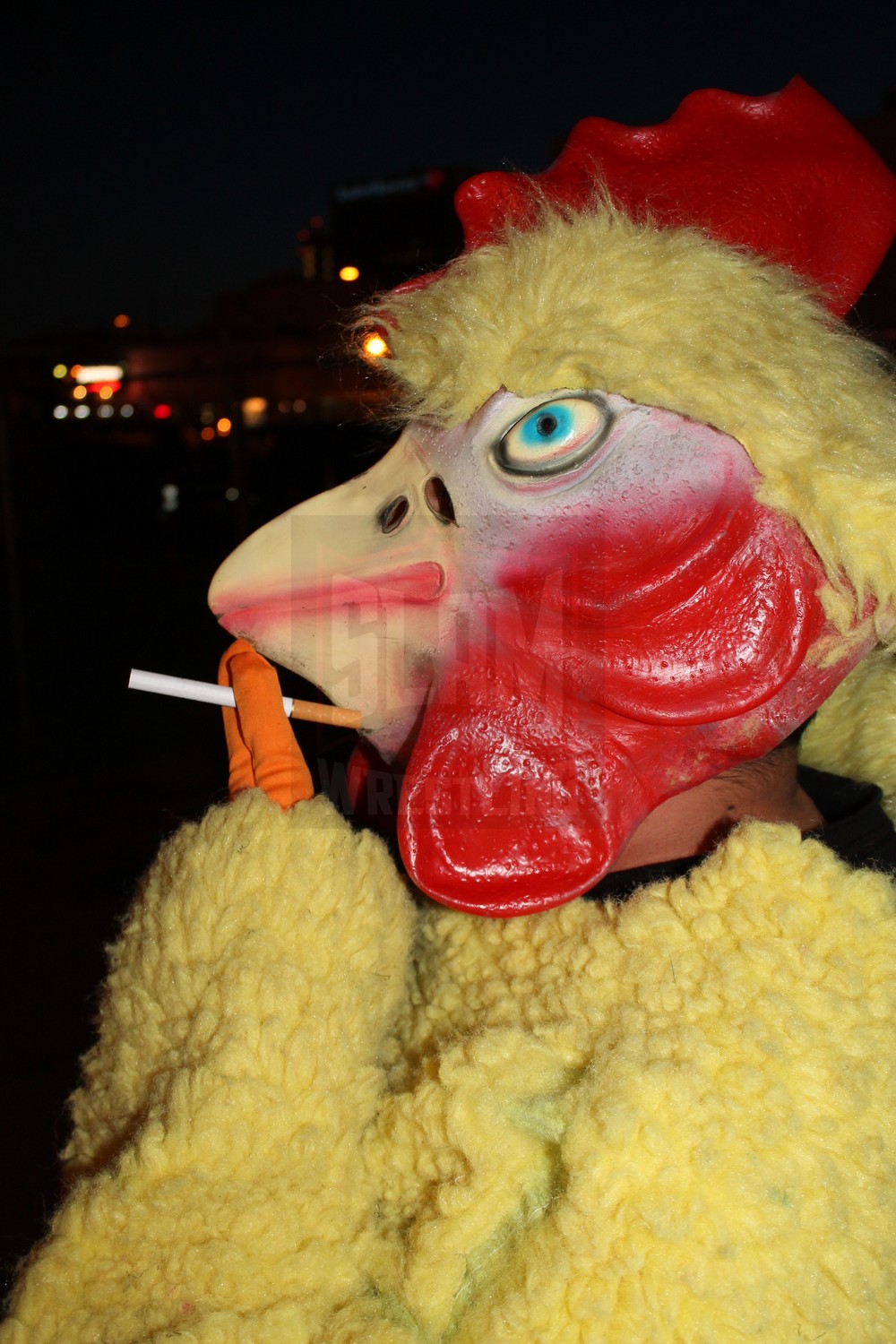 Tommy Zuniga is under the chicken mask.

A Freakshow original, Tommy Zuniga, depending on who you ask, is either the Freakshow Wrestling cock or Freakshow Wrestling chicken. He’s also a referee for a number of the matches. Dressed head to toe, it’s not an easy costume to wear in the heat of Las Vegas. Zuniga called it “a sauna suit” that will result in the loss of a few points by the end of the night. He’s seen the promotion grow over the past five years. “More people are accustomed to it. At first, they weren’t really into the gimmicks, into the characters, but the fanbase has grown and it’s found its own niche,” he said. For half the year, Zuniga works in a cannery in Alaska, and then speaks the remainder of the year bumming around Vegas, living the “chicken dream.”

His favourite story from Freakshow is a bit involved, so stick with it. He was wrestling King Kong while dressed as a banana — but there was no ring, and they were just on stage. “The finish was for him to jump on some trash cans or something. I had a box — if you watched King Kong, you would know the finish — I got a box of paper airplanes thrown at him, and the whole thing is that he would fall. Well, he was moving the frickin’ barrel around so much that when it was his time to fall, the barrel just fell before he did, and literally landed like four or five feet on the ground from the stage. I was like, ‘Okay.’ I didn’t know what to do, so I just changed the finish right there, 1-2-3. He’s out, he’s done.”

A few minutes later, when the bell rang for the next match, King Kong came to and not realizing what was up, went back into action after the banana. “I was just like, ‘No, we’re done! We’re done!’ People were breaking us up. I was like, ‘Ah sh–.’ People thought it was real too, so it worked out great.”