Danny Miller passes away at age 84

Talk about being in your big brothers’ shadows, real or not. Danny Miller, who died today, June 6, 2016, at the age of 84 after many health challenges, was forever dwarfed by Dr. Bill Miller, his elder brother by five years, and by Ed Miller (Ed Albers), a fictional brother.

Yet he too carved out an excellent in-ring career, wrestling for 22 years and then promoting the sport for another 14 years. 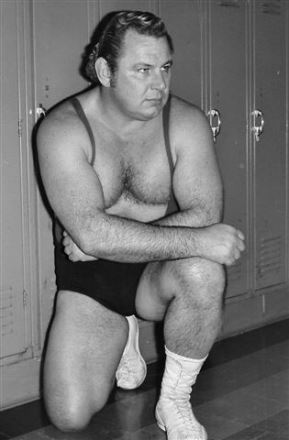 Danny Miller in Detroit in the 1970s. Photo by Dave Burzynski

The story for both legitimate Millers begins on a farm in Fremont, Ohio. (Albers was from California.) The farm had horses, cows, sheep, pigs, chickens, and the five boys and two girls in the family had to all pitch in and help.

Bill was an incredible athlete, and excelled at Ohio State University in amateur wrestling, football and track and field, claiming nine letters. He also studied veterinary medicine and the “doctor” title that he was often announced with in pro wrestling was legit. He also served in the U.S. Navy as a pilot.

In 1950, Bill Miller turned to pro wrestling under Columbus, Ohio, promoter Al Haft and quickly found success. “[Al Haft] took an interest in Bill when he was still in school,” said Danny Miller. “Bill had used his eligibility up, because he had a six-year course. So Al Haft turned him onto pro wrestling while he was still going to school.” The next year, he teamed with Albers in California, who happened to look a lot like Bill Miller.

Like his brother, Danny went to Ohio State, but quit after a year and joined the military. “I did two years in the Service, the Army, at Fort Jackson, South Carolina,” said Danny.

In 1955, Danny got a break when another name didn’t show up and debuted as a professional wrestler. He’d already done some training with his brother and with Haft.

“The first couple of years, I didn’t know which end was up,” Danny said. “When you have the rookie in there, the beginner in there, with Tony Walburg, Jules Lowrance, Wild Bill Sims — I’m trying to think of all those names. It was real tough because the established guys didn’t want to see the younger ones getting a foothold in there. I had mat burns on my cheek, my shoulders, let alone the elbows and the knees.”

After three or four months with the local Ohio promotion, it was time to hit the road. Through the years, Danny Miller worked across the United States and Canada, Japan, Australia, and Argentina.

When Ed Miller broke his ankle, Danny got a chance to join the team. It was special to team with his brother, “It was some of the best times and the best matches I can relate to.”

Ed Miller’s heart wasn’t in wrestling and knew that the legit brothers had a future together, and faded from the picture. [For more on Ed Miller, see our 2012 interview with him: Albers’ roles as a Miller brother, Count and Mr. Kleen led to real estate]

Some of the biggest matches in the history of Calgary’s Stampede Wrestling involved Bill and Dan Miller against George and Sandy Scott. “In 1957, the first part of 1958 at Stampede, Bill and myself sold the Corral out. It was the biggest crowd they had there. It was against George and Sandy Scott,” he said. “They were about my size … They were brothers and the psychology of knowing who was who.” 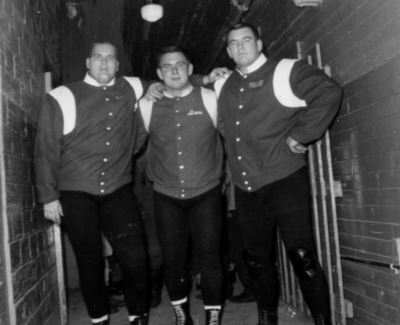 The brothers weren’t always together. A note of trivia is that Dan Miller made one appearance in St. Paul, Minnesota in January 1962 under a mask as El Rojo Cara. Bill Miller was in the AWA promotion at the time as “Mister M.”

After working solo in the early 1970s, “Dandy” Danny Miller left Detroit for Charlotte, North Carolina, and the promotion run by the Crockett family. It became his home for decades.

In 1971, he began teaming with Les Thatcher, and set out to prove themselves, especially against the established babyface team of Johnny Weaver and George Becker. “Becker, being a booker, he got the good towns and the support from all the job people. Les Thatcher and I got sent out to Timbuktu. But we surprised them. They sent us to Norfolk, Virginia and it wasn’t in the Coliseum, the Coliseum was available, but they put us in a pretty good sized arena, which basically we sold out.” Thatcher and Miller beat the Masked Marvels (Jim Starr & Billy Garrett), managed by Ken Ramey, and took the hoods off them in both Charlotte July 4th that year and also in Norfolk.

“In the ring, the fans hoisted us on their shoulders and carrying us from the ring to the dressing room. Needless to say, we weren’t booked back in Norfolk for a long, long time.”

In 1976, Danny Miller retired as a wrestler, and ran smaller towns for Crockett, like Asheville, NC, Louisville, SC, Greenville, SC. He enjoyed running the towns, and his old foe George Scott later became the booker for the territory. “George taught me the business end of the game, and the television end of the game, which I didn’t participate in before, but being there physically as a wrestler. Knowing the business end of it is a lot different. I enjoyed what I did.”

In 1985, Danny Miller moved to Tampa and was the event coordinator for Florida Championship Wrestling with Duke Keomuka and Hiro Matsuda. He also found employment as a security guard at the Tampa Electric Company, retiring in 2000.

Florida was the scene for his favorite ever wrestling moment: “Wrestling with Lou Thesz at the Fort Homer Hesterly Armory here in Tampa in a 60-minute draw.”

He left a legacy in the state, wrote former NWA President Howard T. Brody on Facebook: “Danny was one of my first mentors in the wrestling business and if not for him I would’ve never met Hiro Matsuda, who opened a lot of doors for me.” Danny Miller was a regular at the monthly Tampa wrestler lunches for many years. 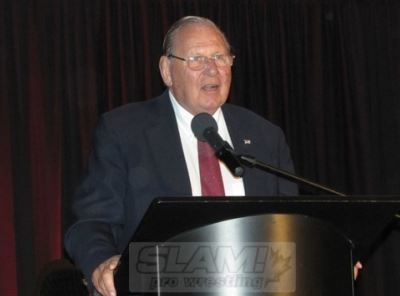 In the summer of 2013, Danny Miller was inducted into the Hall of Heroes at the Mid-Atlantic Legends Fanfest. Gerald Brisco presented Miller, saying he made a name for himself “as one of the honest guys and one of the good guys in this business,” and crediting Miller with elevating the image of wrestling by advancing charitable causes through the Mid-Atlantic territory. Miller, a Florida resident, thanked his wife, Karin, for bugging him into attending his first fanfest. “I’m sure that the wrestling fans who come here today at this great event over the weekend feel the same way I do: It’s worth being here.”

Like any wrestler, Danny could provide a long list of injuries and ailments, not all directly related to wrestling. He broke his neck at Cobo Hall in Detroit wrestling the Kangaroos, tearing the ligaments in both sides of his neck; there was a car accident in 1985; he had both knees replaced; he was diabetic. For many years, he smoked, but gave it up after a cancer diagnosis in 2013.

Danny Miller died this morning, June 6, one day after his 84th birthday, at the Melech Hospice House in Tampa, Florida.

“My father was a gentle giant that had so much love and caring in his life. He touched so many lives here and around the world,” wrote one of his daughters, Christa Miller, on Facebook. “May he be at peace now… I loved my father with all my heart and know he is in a better place.. I ask God to accept him with open arms and I know I have an amazing Guardian angel watching over all of us…”

Greg Oliver interviewed Danny Miller a number of times, but never met him in person. Rest in peace, Danny. Greg can be emailed at [email protected], and you can follow him on Twitter @gregmep.