Praise for ‘The Enforcer’ Arn Anderson

At April’s Cauliflower Alley Club banquet, “The Enforcer” Arn Anderson received the Lou Thesz Award, one of the top awards in professional wrestling. His speech, though, was brief; fortunately, his praises were sung by his former manager JJ Dillon in the introduction. 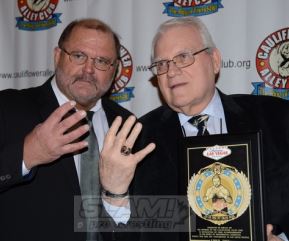 “In 1985 I was in Charlotte. Dusty Rhodes was the matchmaker, I was his assistant, and we worked together for many years. During that time, Bill Watts called Jimmy Crockett and said, ‘Down here in the Gulf Coast we’ve got a young Anderson.’ At that time, the Anderson name was a dynasty in the area. So it didn’t take long for Arn Anderson to appear. Dusty and I both met him for the the first time in 1985, and it was the beginning of a 30 year personal friendship for Arn and I. He proved right from Day One that he was everything that Bill Watts had said that he was and more. And he did it without fancy robes or glitz. He just went in the ring and solid work. Every night, he would basically set the bar for everybody else …

“I recall him as an artiste. He was like Rob Schamberger … with a paint brush. He just was so talented, actually talented at what he did. And if you gave him a mic, he had his own unique style of interviews. He usually had a message, and he could deliver as only he could. When Arn talked, the people listened.

“We were at TBS on Saturday morning and Arn in the meantime had become a World tag team champion with Ole. Somebody sent all the champions out. Flair was the World champion with the gold, and Tully was the National champion, and I was just managing him. Arn and Ole went out there and in the course of the interview, Arn stole a page out of history and made some reference to the Four Horsemen of the Apocalypse, and he threw up this [four fingers] which became known as the sign of excellence that has followed us around for 30 years.

“It was the beginning of an incredible reign. The people remembered the Horsemen. We were working seven nights a week, which involved nine times, between TV and matinees on the weekends, and it was seven nights a week, week in, week out, month in, month out. As Arn’s lovely wife Erin can tell you, we were on the road and after months and months and months, when we looked at the booking sheet and saw a day off, we’d go, ‘There must be a mistake.’ It was hard. It was difficult on the families being away so much, but it was particularly hard on Arn because Arn’s had a bad back as long I’ve ever known him.

“But more importantly, he had cervical nerve damage, and he would go out, and it started with a tingle going down his arm, his shoulder, his bicep and tricep and hand. He’d go to the chiropractor and they’d fix a little bit, but they never did make it go away. Then the tingling in the arm turned into numbness. If there was ever one man that ever deserved the right to say, ‘Hey guys, I’m hurting. I need to take some time off, see a doctor, and find out what this is and get it fixed.’ What did Arn say? Arn said nothing. He just continued lacing boots up and going out there, because that was his commitment to his profession. Being a Horseman really, really meant something to him, and he knew that people bought a ticket to see the Horseman, and that they bought a ticket to see all the Horseman. A lot of them especially, Arn Anderson. It went along, it went along, until finally it became very visible and I just looked at his hand tonight, and his left hand, the nerve damage had gotten so bad that it was insisted that he go see a specialist. By the time he went to see a doctor, the doctor looked at him and said, ‘Arn, I can’t help you, I can’t fix you. It’s permanent. It’s permanent.’ So kept working in spite of it.

“Now, when you talk about greatness in our business, a lot of great people here, greatness, I’d put the world champions up on a pedestal, starting with Lou Thesz, Gene Kiniski, to Pat O’Connor to Buddy Rogers, to Bruno Sammartino and Nick Bockwinkel and Verne Gagne, Dory and Terry, Jack Brisco, Harley Race, Ric Flair — they are in a league all of their own. But when you look at everybody else and you try to measure greatness, greatness is not measured by how many regional titles you won, it’s not measured by how many five-star matches you’ve had. There’s one word that defines greatness in this business and that is respect. Aretha Franklin wrote a song, ‘R-E-S-P-E-C-T,’ respect. And Arn continued to work despite of that damage. I don’t have a crystal ball., so I can’t pinpoint what it is, but the sacrifices that Arn made by continuing to go out there, was it three years? I don’t know. Was it five years? More likely it could have been 10 years.

“Arn Anderson sacrificed the longevity of his career by possibly a good 10 years because of his commitment and love for this business, and going out there every night and delivering in spite of the injuries, which are still apparent today. So when you talk greatness, it’s respect. If you went into our dressing room and asked anybody, ‘Does Arn Anderson have respect in here?’ The answer is, ‘Yes, of course.’ And if the guy across the other side of the ring were asked if he had respect for Arn Anderson, the answer was yes too. He was universally respected in this industry by anyone who ever saw him, worked with him or met him. That is the true, true measure of greatness.

“I don’t have the ability to describe my personal friendship and feelings for this man, for 31 years. I can’t find the words to describe the respect that he’s held by, by virtually everybody that’s ever met him or had anything to do with him in the business. And that’s the reason we’re here tonight. We’re not here to give him something, because we’re not giving him something. We’re presenting him with something that he deserves and he earned.

“So I would like all of you to welcome the recipient of the 2016 Lou Thesz Award, phew [tearing up] The Enforcer Arn Anderson.”

“I looked down the list of recipients for the Lou Thesz Award. There’s prominent names, incredible. Brisco, my God, I mean legitimate bad-asses, including Lou Thesz obviously. And I have a second irony, to the same question — how did Michael Hayes and me get on that list? Moonwalking and getting your ass kicked every night … I don’t know. But I sure am honoured.

“I look across this room and I see a lot of people that came before me and I owe everything, my family, my wife, my sons, we owe everything to you. This business doesn’t owe anything. I’m so privileged to be a part of this and be a part of your lives.

“I had a young man who couldn’t stand up … he came up to me earlier. He said, ‘You’re the reason I started wrestling.’ [looks for him in the audience, applause] … that’s what it’s all about.”

“… the pursuit of this awesome business that we’re all a part of.”

“JR [Jim Ross], you made a bigger deal out of this left hand on TV every week, you actually made the world believe I could knock somebody on their ass with this hand, and I appreciate that.”

“I love you guys, thank you very much”