Diana Hart poured her heart into her recently-released novel, Cauliflower Heart: A Romantic Wrestler, and isn’t shy about saying so.

The writing helped her return to a happier time.

“It just came about from being lonely for the life that I used to have, and missing being a part of everything,” she told SLAM! Wrestling while in Las Vegas at the Cauliflower Alley Club reunion. “My son was wrestling in Japan and I wasn’t seeing his actual footage, because it was over in Japan, it’s hard to find it.”

As a member of Calgary’s Hart Family — the youngest daughter of 12 children — she grew up around professional wrestling and all of its assorted characters.

“I was missing my family and my dad’s house and Stampede Wrestling, and being no longer a part of WWE because Harry had moved on from there,” she said. “I just poured myself into writing and journaling. I just started a fictional story about a lonely girl growing up in England in a little family and they get involved in wrestling. It’s not biographical or autobiographical, but it is a credible story based on my own point of view growing up in wrestling.”

The CAC reunion helped a bit, being surrounded by old friends and making new ones. 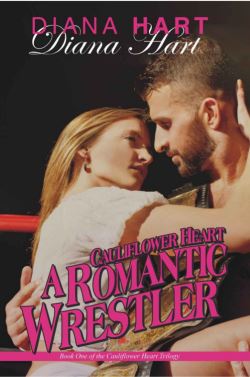 “It’s not like I’m licking my wounds or feeling like I’m no longer worthy, it’s not that, I just feel so estranged from wrestling now,” she said. “I still find a lot of connection with my son Harry, but he wrestles in Japan, so I can’t see him perform live.” Recent shows in Calgary, featuring Davey Boy Smith Jr. — Harry’s in-ring name now — and his cousin Ted Hart filled some of that live-action void for Hart.

The book was a five-year process, but not just on the single book. It’s a trilogy, with the next edition coming out this June, and the third a year later. Hart has been mulling a fourth or fifth book too.

What’s it about? Here’s the description from Amazon:

Claudine Bellamy grew up in a strong family of wrestlers and married a champion fighter. She feels protected and cared for and she likes it that way. When circumstances change, however, Claudine finds herself unprotected and alone. First in [the] Cauliflower Heart trilogy, A Romantic Wrestler, introduces Claudine Bellamy, who thinks she has the perfect life. She has a superstar wrestling husband, and her family enjoys all of the perks of celebrity. But when life grows bitter and Claudine’s husband needs help, will she be strong enough to save him?

She has given some thought to who has been purchasing the book. “I think that people buying the book are largely wrestling fans, but it isn’t just wrestling — it could be a story that takes place in a hospital too. There’s suspense, there’s romance, there’s intrigue. It just happens to all take place with a wrestling background.”

In 2001, Hart teamed with Calgary writer Kirstie McLellan for her autobiography, Under The Mat: Inside Wrestling’s Greatest Family. In the review on this site, it was called “downright shocking” and the Edmonton Sun called it “essentially a gossip and scandal book.” Its contents created another Hart family feud, and Martha Hart, the widow of Owen Hart, successfully sued for the book to be pulled from shelves. The book is still out there, though copies are hard to find and expensive on secondary markets.

To Hart, the first book wasn’t what she had hoped, and took little from the experience to the writing process for Cauliflower Heart and its sequels.

“I learned how to write better. Writing a book isn’t easy,” she began. “The first book, it got chopped up pretty good. When I first saw it, it wasn’t quite what I had in mind, to say the least. That was autobiographical too, and this is a novel.” 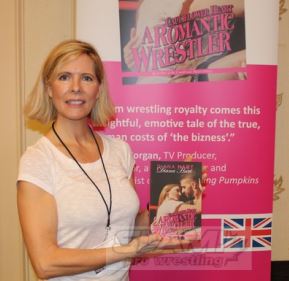 The reception for Cauliflower Heart has been good, she said, including awards at book festivals in Hollywood, California (Runner-Up Best Genre Fiction), and in London, England (Runner Up-Romance), and the Internet-based Silver Readers’ Favorite International Book Award for Best Fiction-Sports. Not bad for a self-published book.

“I feel like the Little Engine that Could, because I didn’t have WWE backing me, I didn’t get ECW [Press] — they said they only do autobiographies or biographical books, so they kindly said no they couldn’t help me,” Hart explained.

By day, Hart works at an oil and gas company in Calgary, and takes it as a challenge to find time to put pen to page.

“I write whenever I can. It’s quite therapeutic. I am all over the place with it though,” she said. I write one thing one day about something and then the next day I’m on a different book altogether. I’ve got three other books started. One is autobiographical, though, about my life. Just so much has happened since that first book and I would just like to start from the beginning and write it. It’s a beautiful story that I had intended in the first place. Then I have another two that are fiction, based around wrestling.”