Mat Memories: A lifetime of memories in one Mania weekend

DALLAS – WrestleMania is always something special, even more when you can attend it live. But this year’s show had an emotional touch to it — it marked 15 years of effort, perseverance and dedication for two guys that I have been friends with for more than a decade: Kevin Owens and Sami Zayn.

“I’ve seen them wrestle each other in some crummy bar in Montreal in front of 90 people and now I will see them in the same match at WrestleMania in front of 90,000 people,” is the phrase I probably said the most last weekend. It was really overwhelming. Everything was. From the production to the show itself, it might sound cliched, but it did feel bigger than life. 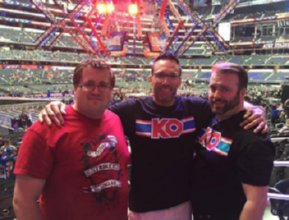 Stephane, Pat and Frank at WrestleMania.

I’ve visited more than 30 baseball stadiums in my life, but I’ve never seen something like Dallas’ AT&T Stadium yet.

So you can only imagine when I was second row from ringside for the opening of Mania and the ladder match that included both Owens and Zayn. I was proud when they got hired, when they made their debut, won a title, headlined in Montreal, but that feeling right there, being just a few feet away from them, is something hard to describe.

And on top of it, they had arguably the best match on the card, with assists from Dolph Ziggler, Sin Cara, The Miz, Stardust and the actual winner, Zack Ryder.

But a WrestleMania weekend is way more than one show now. It’s a whole week of festivities, with fans coming from all over the world to celebrate professional wrestling at its best.

Some may have not liked the booking and certain matches at Mania, but no one can leave Dallas unsatisfied.

NXT was simply awesome. Jason Jordan and Chad Gable may be the best tag team in all of wrestling right now, or very close to. Sami Zayn against the debuting Shinsuke Nakamura was to me the best match of the weekend and probably a real good contender at match of the year come the end of 2016. The vibe there was unbelievable and could resuscitate the love for pro wrestling of anyone who stopped watching it years ago.

Tickets were hard to get for WWE events though, so other options were available.

Ring of Honor was jam-packed with a very good card on the Friday night. I was glad to see a guy like Moose, a former football player, who’s improved so much since the last time I’ve seen him. And I heard the Young Bucks against Motor City Machine Gun as well as Jay Lethal against Lio Rush killed it. (I was going to NXT, my friend stayed, but I would have liked to duplicate myself somehow, believe me!)

EVOLVE on Saturday afternoon allowed me to witness one of the best matches that weekend, when Ricochet and Will Ospreay wrestled each other for the first time. There were many spectacular and never-seen-before moves that it would have been hard even for the Mauros and JRs of this world to announce it. 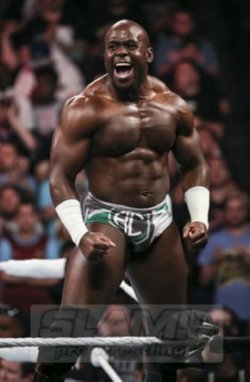 THE FUTURE OF WRESTLING

The fun for a wrestling fan is to catch future talent before they make it big. When I saw Apollo Crews making his debut on Raw Monday night, I couldn’t help thinking that the first time I saw him was on a CHIKARA show in Philadelphia, and I told my friend, “This guy will get signed by WWE one day.”

And I said the exact same thing when I saw former UFC fighter Matt Riddle wrestled Zack Sabre Jr on EVOLVE 59. Riddle has the wrestling skills, the look, the physique, the charisma to make it one day. He needs experience and fine tuning but that’s just normal stuff. With EVOLVE being seen as the stepping stone to NXT, Riddle is there for a reason.

I also said something similar the first time I saw Northern California’s Nicole Savoy at a SHIMMER show a little more than a year ago. Last weekend, she won the first SHIMMER secondary singles title in a tournament, defeating Heidi Lovelace (who has also improved a lot) and the always popular Candice LaRae.

Like every top organization, WWE had scouts pretty much everywhere. The way NXT is right now, that is something more important than ever before. And rumour has it that the scouts really liked Savoy. 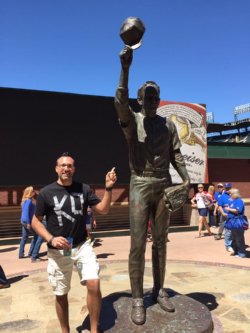 There’s going to be a before and after WrestleMania 32 for women’s wrestling when the decision was finally made to get rid of the name Divas title and to bring back the more appropriate name of Women’s champion.

Matches like Charlotte versus Sasha Banks versus Becky Lynch at Mania, Bayley versus Asuka at NXT, or Paige versus Emma on the Main Event tapings Tuesday night deserved to have a division with a name that represented them better.

Therefore, shows like SHIMMER and Queens of Combat will continue to be a fixture for years to come during Mania weekend. The latter is a sub-division of the WrestleCon group and as in previous years, it is special for the fans to meet with some of their idols. The lines of people for the likes of The Hardys, Rey Mysterio Jr., or Torrie Wilson proved just that.

The counterpart of WrestleCon is WWE’s Fan Axxess and you just need to get in the superstore to understand how big this has become if I compare it to the one I went to in New York City 12 years ago. There were activities for everyone, it was very family-oriented and like last year, there was an NXT TV taping to calm the fans who crave seeing wrestling live.

Raw welcomes the rowdiest of the rowdy. When you hear Roman Reigns gets booed at Mania, it’s not 100,000 people booing him. But the 15,000-20,000 who do boo him are at Raw the next day. And this year it was fun to see WWE understanding better what that crowd wanted. So they chose to debut Enzo and Big Cass and the two answered to the challenge with Amore killing it on the mic. They chose to put Cesaro in the main-event instead of a John Cena-like wrestler that wouldn’t have been over as much. They put AJ Styles over in the main event when everyone expected Y2J.

And SmackDown in Houston showed that when most of those rowdy fans go back home, that the regular fans, those who don’t read the Internet or who don’t even have the WWE Network react a whole different way. Reigns was cheered much more. The Vaudevillains weren’t that over. But the main event of Owens and Jericho against Cesaro and Styles pleased all fans in attendance. 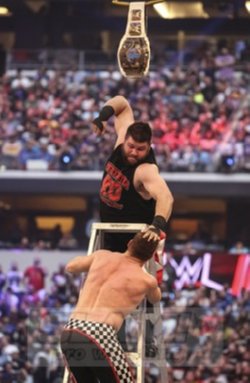 Kevin Owens and Sami Zayn battle on the ladder at WrestleMania 32. Photo by Ricky Havlik, RickyHavlik.com

I’ve seen Kevin and Sami feud in so many promotions, including MWF, IWS, EWR, CZW, JAPW, PWG, ROH and NXT. Now it’s the only logical step for WWE; if the finish of the Mania ladder match indicated that direction, their feud was confirmed by the time Raw and SmackDown were taped.

It was my most unique experience during a Mania weekend on so many levels, and I’m not sure something will ever top that. Then again, Owens versus Zayn in Orlando at WrestleMania 33 would probably do it.

And I guess after that, something else will. WrestleMania weekend, with all the parties like WWN, WrestleCon and ROH involved, might very well become an annual visit.

If you really love pro wrestling, it should become one for you as well.

Pat Laprade was happy to have met with so many acquaintances from the wrestling world during the weekend. And he will meet some more as he’s in Las Vegas right now, getting ready for the Cauliflower Alley Club that starts next Sunday.