ARLINGTON, Texas — Sunday’s WrestleMania 32 at AT&T Stadium can definitely be categorized as a marathon, not a sprint.

For the announced crowd of 101,763, the six-hour show kept good pace and left most on the edge of their seat — something of a surprise given the length of the show.

The crowd maintained itself for the duration until the main event, at which point the action in the WWE World Heavyweight Championship match between Triple H and Roman Reigns wasn’t enough to keep the crowd away from singing, chanting for other wrestlers, or even doing the wave. 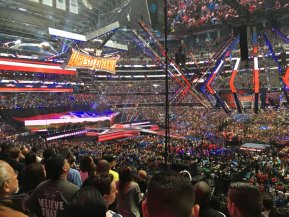 The view from Matt Bishop’s seat.

The two had the type of match that wouldn’t have kept 15,000 people interested after six hours, let alone 100,00 people. From the words of the fans leaving the massive stadium, it was a missed opportunity.

Although the show ended on a down note for most, the rest of the show brought many unexpected twists and turns that were loved by the crowd — and the stadium was awe-inspiring.

WWE packed as many people in as possible with a low profile stage that certainly fit the billing. Not to mention they made excellent use of all the available video boards in the stadium, including the 60-yard long video screen above the field. On that massive screen, they produced what appeared to be an alternate broadcast, so to speak, mixing in the wrestler’s TitanTrons on it as they entered, along with multiple angles of both live action and replays. On top of that, in something this reporter has never seen before, they had a bit of cheerleading on the board as well for both The New Day and Charlotte, along with keeping a count of each Brock Lesnar suplex.

Prior to the event, the area outside AT&T Stadium was an absolute madhouse. People were lined up on the street and around the stadium for a long-time beforehand, many baking in the bright Texas sun and many not entering the stadium at their assigned gate, which created confusion and even further backups.

Perhaps a bit of a mis-step on behalf of WWE and the stadium was not opening the doors sooner. For anyone who has ever been to a wrestling show, we all know wrestling fans love to line up early and enter as soon as the building opens for some reason — and it’s even worse for WrestleMania. On this night, this created a big glut trying to get in when the doors opened slightly after 3:30 p.m. local time, with the first match scheduled to go off around 4:30 p.m. local.

When Kalisto and Ryback came out for their United States Championship match, only about 30 percent of the crowd was in its seats. A little bit of foresight could’ve worked wonders here.

Although early in the marathon session, the best match of the night was certainly the Intercontinental Championship ladder match, which saw Zack Ryder pick up the upset win to capture his first IC title. Both Kevin Owens and Sami Zayn were hugely popular in this match, especially Owens, but Ryder’s win, especially after booting the hated Miz (who was booed out of the stadium when he was at the top of the ladder), was loved by all.

The best overall package was undoubtedly the WWE Women’s Championship match contested between Charlotte, Becky Lynch and Sasha Banks. WWE put this match in a position to shine and in front of a large, diverse audience, it most certainly did. The crowd was most behind Banks — especially after being brought to the ring by her cousin Snoop Dogg — and Charlotte also received the superstar treatment on her entrance. The match itself had a lot of high points and the familiarity the three have with each other certainly paid off as they all traded submission attempts. The crowd was a bit surprised, though, when Charlotte secured the tap out of Lynch as her father Ric Flair held Banks back from breaking it up. The WWE gave even further credibility to the win by having a big pyro display following the match.

Although the Hell in a Cell match between The Undertaker and Shane McMahon was understandably a bit on the slow side, the match will forever be remembered for quite possibly McMahon’s last insane act inside a wrestling ring, as he plunged 20 feet from the top of the cell through the announce table below. It was a crazy spot and pretty evident this was McMahon’s swan song.

Of course, we’d be remiss if we didn’t discuss the appearance of Shawn Michaels (who looks like he could have a 30-minute match tomorrow), Mick Foley and “Stone Cold” Steve Austin, who beat down the League of Nations. Naturally, with this being Texas, Austin got by far the biggest reaction of the three, as the giant video board nearly came crashing down from the reaction. The crowd loved it when The New Day attempted to get the three Hall of Famers to dance, and even more so when Austin deliver a Stone Cold Stunner to Xavier Woods.

The Rock also came out and delivered the good news of the attendance before he was interrupted by The Wyatt Family. Their entrance with all those phones in the air was something else. The Rock ended up having an impromptu match with Erick Rowan, beating him in six seconds, before behind circled by the Wyatts, only to have John Cena, who was met with a thunderous ovation, save the day. The two naturally cleaned house and got everyone ready for the main event.

All told, this WrestleMania was one of my favorites. The stadium was so great and sightlines so good, it’s easy to see WWE making Dallas a regular stop.