SLAM! Wrestling’s Matt Bishop is in Dallas and will be hitting a ton of shows and events this weekend. Check in here regularly for his reports and details about the things he’s seen and experienced while in “The Big D.”

Although it was the unveiling of a Dusty Rhodes statue and a Stone Cold Podcast with Mick Foley that highlighted the night, fans were treated to a host of superstar autograph sessions throughout the evening. 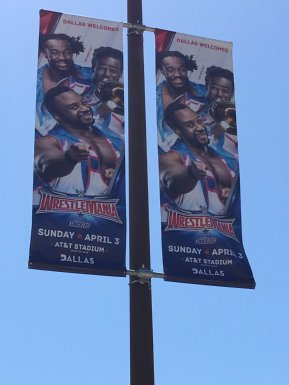 Walking around throughout the session, the biggest lines seemed to be for the women — namely Eva Marie and Lana, who signed together, but that was trumped by a jam-packed line for Becky Lynch, who seemed to be the most popular wrestler there.

Being that this is only my second WrestleMania (my first was WrestleMania 23 in my hometown of Detroit), I was stunned by how much more of an event this has become. I recall attending Axxess with a good friend of mine at 23 and it was pathetic, frankly. It was held on a small stretch of concourse at the stadium and featured Hillbilly Jim signing autographs and that was about it.

This was an event. On this night, for the ticket price, fans got access to the superstars, a few NXT matches, including Enzo & Cass taking on Blake & Murphy, Q&A’s with Ryback and Alberto Del Rio, and a really neat memorabilia section, which featured the statues of Andre the Giant, Bruno Sammartino, Ultimate Warrior and Dusty Rhodes, plus rare wrestling artifacts such as a variety of Sting’s ring gear throughout the years, the car door Brock Lesnar broke off and chucked last year and items for many of this year’s Hall of Fame class. As authentic wrestling memorabilia isn’t something you ever see, this, to me, would’ve been worth the price of admission alone.

Even if getting autographs isn’t your thing, there seems to be a ton of value in Axxess these days.

DALLAS — A bright, warm sky cast over downtown Dallas on Thursday, as thousands of wrestling fans descended upon North Texas in anticipation of WWE’s WrestleMania 32.

From the suburban airport to restaurants throughout the downtown area to the Kay Bailey Hutchinson Convention Center, home of WrestleMania Axxess, wrestling-shirt clad fans barreled through by the dozen.

Things were especially dense early on at the convention center, as the WWE merchandise store, open to the public, opened to a line hundreds deep.

On the streets of Dallas, fans were not partial to any one particular wrestler, either. The downtown area saw an array of fans in wrestling paraphernalia — shirts for Brock Lesnar, Dean Ambrose and Paige were especially popular, as was general WrestleMania branded merchandise.

Not only are fans decked out, so is the city. Banners featuring a multitude of WWE superstars adorn the street lights, as well.

And this is just the start. If this first sampling of the weekend is any indication, the old adage “Everything is bigger in Texas” certainly is going to be the case this weekend.