Bull Dempsey on the hunt for what’s next

Now that he is not a part of NXT, Bull Dempsey — wrestling as Bull James — is concerned about what’s next.

In the immediate future is his first trip to Canada, but after that, there’s a world of possibilities. 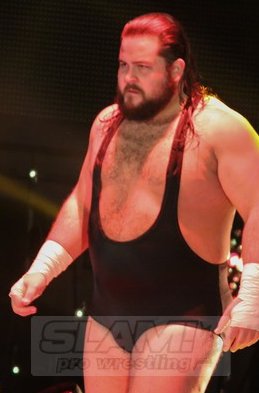 “It’s a good opportunity and I’ve heard a lot about Smash from a lot of my friends that have worked there. I’m excited to see what they have to offer,” he said.

Opportunity is everywhere now on the indy circuit, where he has an established name after a couple of years on WWE’s NXT program.

He also recently attended The Big Event fan festival in East Elmhurst, NY, near LaGuardia Airport, where he mixed with fans and fellow grapplers.

“Just to meet the fans and hear what they’ve got to say, and just get to know them a little bit,” he mused. “The flipside is being around guys like Stan Hansen and Terry Funk, who I idolized. To get to sit down and talk to them is just an honour.”

The 28-year-old James Smith has been wrestling since 2005, working along the American East Coast, using names like Donnie “The Body” Johnson, Smith James. Baby Hughie, and Hugh Smith.

In June 2013, he signed a deal to head to WWE’s developmental territory, and became Bull Dempsey, debuting in September of that same year. The 6-foot-2, 299-pounder went from a powerhouse character, a no-nonsense brawler type, to a comedy character whose gimmick was essentially being an overweight fitness enthusiast during the almost three years he was in NXT.

Bull-Fit had its supporters and James seemed to enjoy himself. “It was just an idea that was presented to me and we ran with it. It was a lot of fun,” he said. “Any time that the fans are into something, anytime that they’re having fun, it’s hard for you as a performer not to have fun too.”

Starting at the end, there’s no bitterness over partying ways with WWE/NXT. He considers the door still open for a return down the road.

“I feel that the way it is structured is the right way, because it’s not just, ‘Oh, if you leave there, you can never come back.’ You leave, you go out and you find yourself, and you come back in a couple of years and try it again,” James said.

He was along for the major rise of NXT as a brand, where it is routinely selling out venues away from its Florida base.

James conceded that there was “friendly competition” between the NXT and WWE roster, but it’s a little like comparing apples and oranges as far as exposure goes. 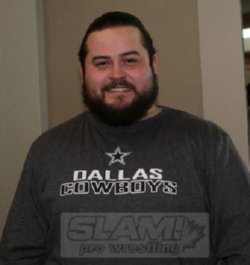 Bull James at The Big Event on March 6, 2016. Photo by George Tahinos

There were tons of people that took the time to teach him along the way, from the early days on the indy scene — Matt Borne, Taz, Danny Doring, Danny Inferno, Judas Young — to WWE and NXT — Michael Hayes, Scott Armstrong, Gerry Brisco, Lita, Joey Mercury, Fit Finlay, Arn Anderson, Jamie Noble. “The list is endless,” he said. “If those guys are around and you’re not picking their brains, you’re wasting your time.”

Wrestling has to always be a progression, he explained.

With trips to Canada and the United Kingdom at the end of May, and who knows where else, in the near future, Bull James is certainly not ready to quit.