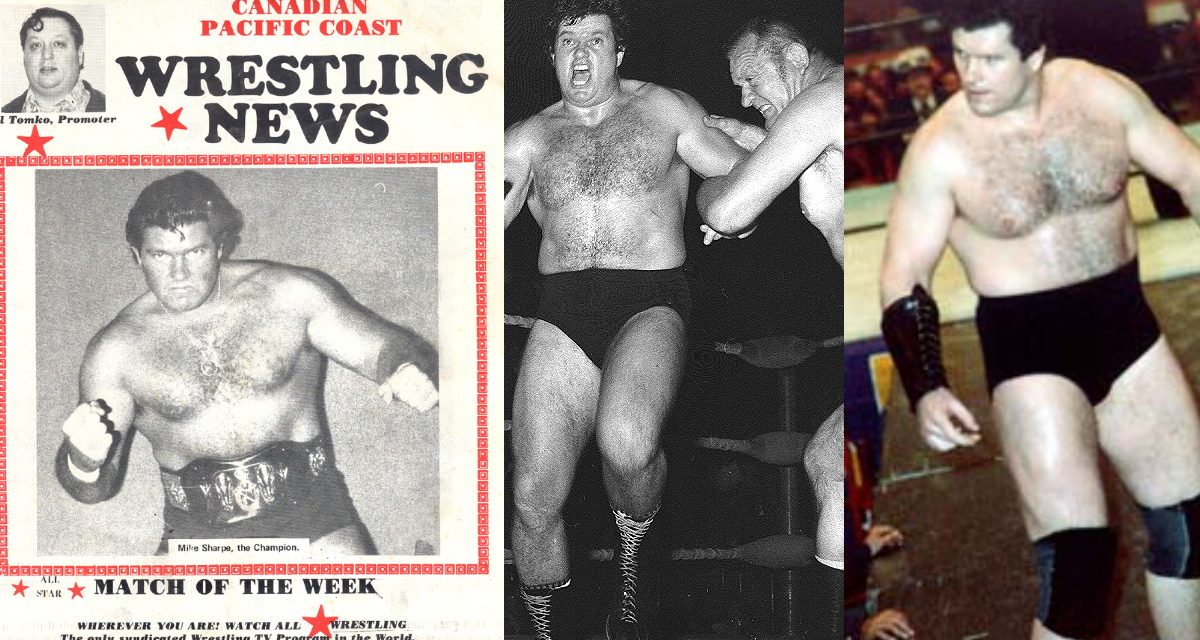 To remember Iron Mike Sharpe, who died on the weekend in Hamilton, as a “jobber” in the WWF is to do the man an injustice. A second-generation grappler, Sharpe Jr. was a main event wrestler in many territories, a challenger for Bob Backlund’s WWWF title, even tag teaming with Hulk Hogan during a tour of Japan.

He may not have been “Canada’s Greatest Athlete” as he insisted, but Sharpe Jr. was certainly one of the most accomplished wrestlers of his generation and a memorable character as WWWF transformed into a national entity as WWF.

Sharpe, who died at age 67 on Saturday, January 16, had faced numerous health issues over the last decade, returning to Canada for the health care after years in the United States. He became a bit of a recluse, with old friends and trainees reaching out to get in touch again.

It was a surprise, therefore, when Iron Mike Sharpe, dressed in a hoodie and looking substantially smaller than his wrestling heyday, appeared on a video during August’s tribute to Angelo Mosca.

But Mosca was being celebrated by Hamilton, and Hamilton was a major part in making Iron Mike Sharpe. 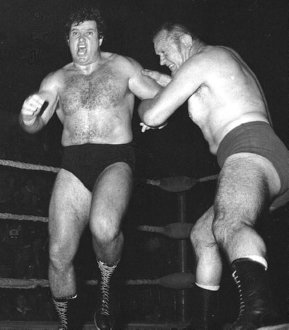 Iron Mike Sharpe is tossed across the ring by Gene Kiniski. Photo by Bob Leonard

The 6-foot-4, 240-pound Digby Sharpe was a well-known police officer in town, and his two sons, Ben and Mike, grew into hulking young men, capable of great athletic feats. (There were four Sharpe sisters as well, Yvonne, Dolores, May and Marguerite.)

Ben Sharpe competed for Canada as a rower in the 1936 Olympic Games. The brothers reunited after a few years apart near the end of the Second World War, and decided to pursue professional wrestling. They were stars in San Francisco, which led to numerous trips to Japan, and the Sharpes were among the forefront of gaijins who succeeded in the world of puroresu.

Mike Sharpe Jr. is a product of the marriage of Kathleen and Mike Sharpe Sr. from 1948. Their marriage didn’t last and the relationship between father and son, born in 1949, was essentially non-existent.

“Mike always wanted to get to know his son ‘Iron Mike Sharpe,’ and expressed the concern that following his divorce from Kathleen, he never saw his son again,” wrote the late Paul Gibson in his wrestling-related memoirs. “The reason for this was that Kathleen had moved back to Hamilton.”

Sharpe Jr. was estranged from the extended Sharpe father, his half-siblings in California and many cousins. He was apparently closer to his half-sister, Donna Marie, who was the offspring of Kathleen and another man, but raised in San Jose.

Aunt Kathleen “told Mike a bunch of lies about his father. He was supposed to have custody of him,” she said. “He finally got custody of him when they showed up here in California one time and Michael got in trouble and was at a boy’s ranch. I remember going with my dad and my uncle to go visit him and stuff. Somehow, my aunt Kathleen finangled herself and got him out of there. They took off and went back to Canada and my uncle couldn’t do anything about it because the custody was here in California.”

Digby Sharpe, the son of Mike Sharpe Sr., and half-brother to the late Sharpe Jr., said that the relationship ended about 1954, and did not have kind words on Kathleen. “She was about getting my dad’s money. And that’s just what she did. She took all of my dad’s money.”

Growing up in Hamilton, and attending Delta high school, Sharpe Jr. morphed into a massive man, like his father and uncle, 6-foot-4, 270 pounds, and built. He first considered boxing. “I thought it was going to make that my profession … give it a serious try,” Sharpe told the Hamilton Spectator about 50 bouts into his wrestling career.

Having done some amateur wrestling at the YMCA, Sharpe Jr. gave professional wrestling a try, learning from Dewey “The Missing Link” Robertson.

Robertson praised his young charge in the Spectator article. “He’s got all the natural attributes,” Robertson told reporter Garry McKay. “He’s got a charisma about him that makes him really popular with the fans. He’ll go a long way fast.”

Sharpe Jr. talked about his father’s legacy in the same article. 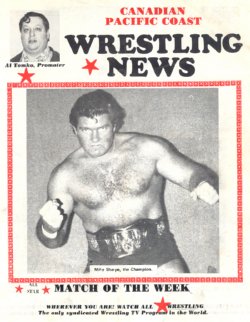 “I’ll admit that having a famous father does open a few doors for you,” he said, adding, “having the doors open doesn’t do you a bit of good if you can’t perform.”

Early territories for Iron Mike Sharpe were in British Columbia for Al Tomko, where he teamed with Moose Morowski, and Mid-South for Bill Watts, where he was Louisiana champion.

Sharpe looked after “Dr. Death” Steve Williams in Mid-South, and Williams wrote about it in his book:

The first person in Mid-South that I really got to know was Mike Sharpe. You could probably say that Mike mentored me throughout my first full year in Mid-South. Mike is a straight-up, classy guy. He is very personable and easy to talk to. Since I didn’t own a car, I shared in the expense and rode with Mike from town to town. We were always the first ones to the arena and the last ones to leave.

He taught me about financial responsibility. He told me to keep all my receipts that were business-related so I could write them off at the end of the year. I watched my spending and saved as much as I could. Mike genuinely looked out for me.

In Stampede Wrestling, he teamed with Duke Myers. 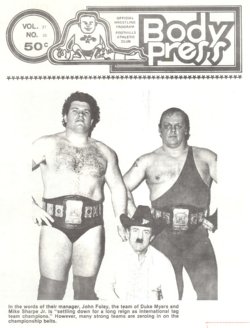 “The guy was super strong,” recalled Myers years ago. “He was so strong, it was unreal.”

Myers recalled a riot in Edmonton. “I was popping people all over the place. I played tug of war with a guy’s neck. I had him in a front facelock, and a cop had him by the feet. The cop said, ‘I’ve got him.’ I said, ‘No, I’ve got him.’ Mike is over in the corner. He was told to go to the corner for the finish. I busted about three or four people. After the match was over, I said, ‘Mike, how many did you get?’ And he says, ‘How many did I get of what?’ I said, ‘The fans, when they were coming in the ring!’ He said, ‘Oh man, I thought those were babyfaces.’ He never touched anybody.”

A Wrestling Revue profile on Sharpe Jr. during his WWWF heyday, challenging Bob Backlund for the company’s World title, described him as “a big, dynamite-looking boy, with shoulders at least the size of a football field and a neck to go with it.”

“I got along great with Mike,” said O’Hannon. “He wasn’t a typical guy in the business, in that, the social part of the business; he kept pretty much to himself, and was quiet. He was a phenomenal athlete, always kept himself in top shape.”

Sharpe described his workout to Wrestling Revue. “I do calisthenics. I lift weights. I also do my road work, skipping rope and like that. Lately, I’m a lot more into endurance. A lot of guys go into a gym to see how much they can lift and how macho they look in the mirror. But no matter how much meat you can throw across a ring, if you tire out halfway through a match, you’ve had it.”

But maybe Sharpe Jr. was his own worst enemy.

He “should have made a fortune,” said Hamilton-based wrestler Pat Blake. “Mike was a way better worker than his father. He had a hell of a body on him, Mike did. But Mike, see, he had a different attitude. When he went to work for Vince McMahon, he wouldn’t do a job on TV. So just Vince just used him. He said, ‘You want to work? You do what I say.’ Vince McMahon, you know, he’s got the last word.”

There are few “babyfaces” of the glory days of the WWF that Sharpe did not face, his black arm bar to protect a forever-healing sore arm, usually coming into play at some point as he bellowed in pain.

“No, no, no, no,” recalled “Edge” Adam Copeland for SLAM! Wrestling today. “Every kid knows that.”

Sharpe was a germaphobe, and was very much stuck in his ways.

Myers recalled a trip to Japan where Sharpe brought a long Army duffel bag full of 200 pounds of tuna “because he didn’t want to eat the Japanese food. He went on a tuna diet. He carried it on the train and everything.”

“Sharpe was known backstage as Mr. Clean. He spent hours at the sink washing his hands before wrestling and hours more in the shower after each of his matches. One night, after wrestling in an early bout at the Spectrum, he was still soaping up in the shower long after the matches had ended. Luckily he found a night watchman to let him out of the locked building long after everyone had gone home.

“Mike was a middle card tough guy who often was used by McMahon as a stepping stone for future contenders of the WWF championships. He wore a leather band on his arm that extended from wrist to elbow. Although it was made of nothing more than thin black leather, once nailed with an ordinary forearm smash, Sharpe’s opponents senselessly collapsed to defeat. Iron Mike also slid weapons under his armband which he used when in trouble, concocting more controversy than his harmless gimmick ever deserved. He squashed lesser opponents on television only to be thrashed by up and comers at live events in Philadelphia and all of the major venues throughout the WWF territory. Once getting past Sharpe, the wrestler who was receiving the push gained credibility en route to presenting himself worthy of a title shot.”

After his WWF run ended, Sharpe trained wrestlers in New Jersey, including Mike Bucci, who wrestled as Nova and Simon Dean, and Crowbar Devon Ford.

“I am in shock and saddened to hear of the passing of Iron Mike Sharpe. Mike was a great friend and teacher,” wrote Richie Rotten on Facebook. “It was Mike who taught me how to wrestle and gave me the chance to live out my dream of being a pro wrestler and I have honored him ever since by teaching others and giving them the same opportunity. Rest in peace Iron Mike and thanks again for all of your help, guidance and teaching.

In the summer of 2006, Sharpe was hospitalized for a serious leg infection. He had poor circulation and severe ulcers and wounds on his legs so had to work his way back to health. An article in the Hospital News talked to Sharpe about his rehabilitation at St. Peter’s Hospital.

“As an athlete, a performer, and a stuntman, I was always in tremendous shape because I was constantly active,” Sharpe said. “All my life, I had my own exercise routine I followed, but because of my physical limitations as a result of my injuries, I had to adapt to doing what was necessary for me to improve.”

Forced to use a cane after his release, Sharpe Jr. continued to return to the hospital to visit patients.

He was not a regular at the gatherings of the retired Hamilton wrestlers and remained very much a mystery for the last number of years.

That includes the news of his passing this weekend, where details are few and far between.