I’ve been lucky as a wrestling fan to have attended many house shows, TV tapings and even four different WrestleManias. Out of all of the matches and cards I have seen, there remains one show that stands out as special to me and to many other wrestling fans in Calgary.

On December 15, 1995 the “Showdown at the Corral – A Tribute To Stu Hart” took place at the Stampede Corral. Stu had turned 80 that year in May, and fans and wrestlers gathered to pay tribute to him and the decades of history in Stampede wrestling.

For weeks the anticipation built, primarily through Bret Hart’s weekly syndicated column in the Calgary Sun where talent and matches would be announced. It was a chance for fans who primarily got a handful of WWF house shows per year to see something different and for fans of Stampede wrestling to see the return of some of the past stars and the hard-hitting style that was synonymous with Calgary. 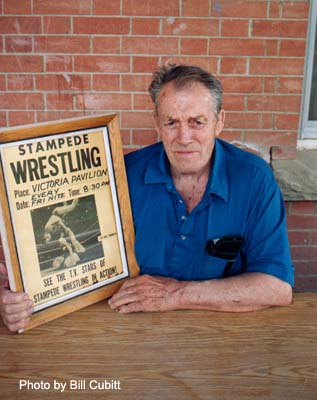 Politically the show was something that has pretty much been unheard of since. The Monday Night Wars were just beginning to brew with Nitro only a few months old. It spoke to the respect that Stu had earned that the show included not only his family that were competing in the WWF but also Brian Pillman and Chris Benoit from WCW. In fact an inter-promotion match occurred with Benoit facing WWF’s Rad Radford (Louie Spicolli.)

The show had its hiccups for sure.

The scheduled main event of Bret Hart versus Shawn Michaels was dropped, as this was after the Shawn Michaels concussion angle that took him out for a few months leading to his comeback and WrestleMania XII title match against Bret. Several matches changed. Shane Douglas was scheduled and dropped, and probably the most disappointing no-show was Abdullah The Butcher. In the end though, it didn’t matter because it was still a remarkable evening of wrestling.

For me, the match that sticks out still was the reunited Bad Company, Bruce Hart and Brian Pillman, taking on Terry and Dory Funk Jr. It’s fuzzy who, but someone went through a table which was unheard of as of yet in the major leagues. I remember Pillman having a huge grin on his face and being so excited to actually see the Funks live.

There were Stampede legends like The Cuban Assassin, Gerry Morrow, Makhan Singh, and Rhonda Singh. There were WWF stars like The 1-2-3 Kid, who had a great match with Keith Hart. I remember the sickening thud of Keith’s head hitting the ringside table as he caught Kid on a plancha. Razor Ramon defended the Intercontinental Title against Owen Hart and weirdly did a similar finish they did in a previous match in Calgary in 1994 — Owen pinned Razor and seemed to win the belt only for the match to be restarted and “The Bad Guy” retaining.

Two days before their In Your House bloodbath, Bret Hart defended the WWF title against Davey Boy Smith — Hart’s final WWF title defense in his hometown ever. It is amazing to look back now and realize how many things occurred that night that only happened once, or happened for the last time.

The harder thing to look back on is the list of people that night who are no longer with us. Ed Whalen did commentary that night while Alberta Premier Ralph Klein sat ringside. Stu and Helen Hart are both gone. The number of wrestlers that night that have passed away — many of which should still be here — is both shocking and sad. Mike Anthony, Makhan Singh, Rhonda Singh, Chris Benoit, Louis Spicolli, Brian Pillman, Owen Hart and Davey Boy Smith all died young.

I still smile though when I remember that cold December night.

A heavily edited version did air on Global TV but finding the uncut version of the show is difficult.

For me personally, it is special because of an interaction that occurred near the end of the night.

Our seats were, I think, fifth row floor, but they may have been closer. Directly behind us was a section filled with Stu, Helen and members of the family. Suddenly a meaty paw rested on my shoulder. It was Stu.

“I’ve been watching you,” he said, “You’re a big bastard, you could be in the ring with those guys.”

A month later Keith Hart was in my kitchen talking about training. I kind of consider this show my launching pad from fan to being part of the business. Even though the being a wrestler thing didn’t pan out, the friendships made after, the memories good and bad, and the doors that opened stemmed from this night. There is a very good chance that my contributions to SLAM! Wrestling over the past 12 years would not have existed had it not been for a chain of events that kicked off that night.

There are shows that are great. Ones that are memorable or have a match that stands out as one of the best you have ever seen. For me, and for many of the others that were there that night, The Showdown at the Corral remains one of the best wrestling memories of our lives.