He was banned in four countries. He was hardcore before ECW was even an inkling of an idea. And despite his passing in 1985, Wild Bull Curry still receives fan mail by way of his son, Flying Fred, on a weekly basis.

This, Fred said, is the crux of the reason for penning The Walking Riot, a biography of Wild Bull’s career — he didn’t want his name, or his father’s, to diminish.

“All these years had passed … (It’s) kind of touching, a lot of the fan mail I do receive on him is a lot of how they really miss him, how he was so exciting to watch. So that just motivated me,” said Fred, who also is penning an autobiography. 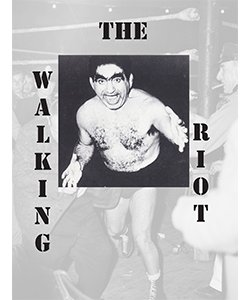 In The Walking Riot, Fred details Bull’s birth during the Depression and how he took to the carnival circuit — “taking on all comers” — to earn money for his family, which included five children. The wild one also plied his craft as a boxer and police officer, in addition to wrestling in Michigan, New York, Boston and Texas and internationally in Japan and Australia. During his boxing days, which included a run as light heavyweight champion, Bull fought renowned champion Jack Dempsey in Detroit.

“He’s an extraordinary showman out there,” Fred said.

Bull Curry proved that at one point by bringing photographer and journalist Bill Apter into the fold. Apter writes in Is Wrestling Fixed? I Didn’t Know it was Broken, that the wild one once pulled him into the ring by his hair.”No, I was not told in advance this would happen, and yes, he did hurt me as he was pulling,” Apter writes. “I also dropped my new Nikon to the floor. He began punching me in the face and before I knew it, babyface Tony Marino came to my rescue. Backstage, Curry made no apologies. He just said, ‘Don’t get so damn close to the ring next time.'”

Wrestling historian Tom Burke first saw Wild Bull wrestle Dec. 29, 1959, at 14 years old, and as Burke became more involved in the industry, he met the Bull in the early 1970s and formed a decades-long friendship with the family.

“In that time period, I’ve seen Bull Curry become an icon to fans of my era who look up to him and realize this is a person who… was an originator of hardcore wrestling that is a mainstay in wrestling today,” Burke said.

Despite “modern fans” attributing the birth of the hardcore genre to various people, Burke said Curry was “doing it 30 years earlier in the ’50s.””If he had been around in his prime, decades later when ECW was around, he would have been the top guy, there’s no doubt about it,” Burke said.

The Wild Bull’s reputation as a hardcore wrestler began, according to Fred, with a bad-man contest in Detroit, which determined “who’s the roughest guy around.” He later made his way to Texas, where promoter Morris Sigel wanted “the wildest man in the country” on his shows in everything-goes matches.

Wild Bull Curry, according to Burke, initiated the use of brass knuckles, while “his look was fearsome to begin with,” and was jailed on more than one occasion for inciting riots.

“He sure wouldn’t be the golden boy of Metro-Goldwyn-Mayer because of his looks, but that added to his persona and his ring tactics,” Burke said.

Fred said Wild Bull would “be a superstar above superstars in today’s environment.” For justification, he said to “look in the record books” — Wild Bull caused 25 to 30 riots and was banned in four countries.

“He was banned in Japan because some guys through a saki bottle in the ring and hit a spectator,” Fred said.

But Fred said the highlight of the Bull’s career was his time in Texas.”Texas was just about done … They put him in and he got over so big,” Fred said. “He was the only guy at one time (who was) the Brass Knucks Champion — like the ECW hardcore wrestling, the origination of that — and Texas Heavyweight Champion at one time.”

Burke said today’s wrestling fans should be aware of Bull Curry’s career for the simple fact that he’s part of history.

“Sad to say, the modern fans are not the same as the fans, I’ll say, 40 years ago, who had a little better understanding of the history of wrestling… We have become so obsessed with the present we forget the past,” Burke said.

However, Fred said future generations need to know about Wild Bull Curry because “the name is still out there” through magazine archives and YouTube, in addition to the fact that his 19-year-old son is wrestling in college and will soon “break into the pros.”

“The name and the legacy will not die,” Fred said. “So I just wanted to double down on that by writing books.”