BERWYN, Ill. — Madison Eagles became a two-time SHIMMER champion on the first night of the company’s 10th anniversary weekend, reclaiming the title with a win over Nicole Matthews in a wild no-DQ bout on Saturday in Berwyn, Illinois.

Eagles’ won over Matthews capped off the first of a two-day session as SHIMMER tapes DVD volumes 76-80 (the match was the main event of Volume 77). 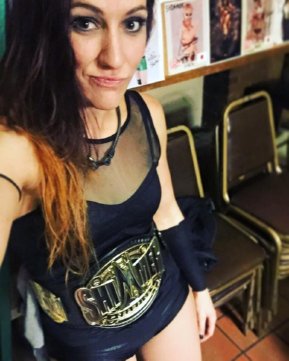 The singles bout between Matthews and Eagles was the culmination of a feud more than one year in the making. Eagles – when previously held the SHIMMER title from April 2010 until October 2011, a run that earned her the distinction of being number one in the PWI Female 50 in 2011 – had previously been allies with Matthews and her Canadian Ninjas partner Portia Perez. However, friction from their competitive natures caused a rivalry, which exploded last October when Matthews burned Eagles with a fireball en route to winning the SHIMMER title in a four-way elimination bout involving champion Cheerleader Melissa, Athena, Eagles, and Matthews.

Eagles has been pursuing Matthews ever since. The Australian nearly earned a title shot in a battle to determine a top contender for Matthews’ title earlier Saturday (on Volume 76), only to be robbed of the chance when Matthews and Perez interfered in the match and caused her elimination. Matthews went on to retain her title against the battle royal winner, Candice LeRae, before being forced into the title defense against Eagles later that evening.

Matthews and Eagles pulled out all the stops, with Matthews connecting with a brainbuster on the ring apron and Eagles coming back for more. At one point, Eagles went to the back, grabbed Kay Lee Ray, and threw her at Matthews like a cannonball, using any weapon she could get her hands on. In the end, Eagles connected with her Hellbound DVD onto a chair to gain the pinfall.

With the win, Eagles joins Cheerleader Melissa as the only two-time SHIMMER champions. Eagles says she already feels the pressure of being the king of the mountain.

“The first time, if I did a poor job, they could just take the belt off me,” Eagles said. “This time, it’s like ‘We know you can do a job.’ There’s a lot more pressure this time.”

In other news from the tapings, two-time SHIMMER tag team champion Portia Perez announced she will be retiring due to injury. The Brockville, Ontario, native is scheduled to wrestle her final match on Sunday.