Comparing a weekend of ROH vs WWE

This past week I had the pleasure of attending a Ring of Honor TV taping and WWE Monday Night RAW. There is no comparison to witnessing the WWE live. They are slick, exciting and are number one for a reason. On the other hand, something is lost when you watch a three-hour long wrestling show and only one hour of it is wrestling. That intangible that is missing is the magic.

Magic? What magic? These days the WWE is heavily scripted, totally rehearsed with very little chance of a spontaneous moments happening. Heck, if half of their guys had to call an audible in the ring and change the carefully memorized moves, the show might grind to a halt. Where have those free flowing promos gone that had us all “Freak out! Freak out!” and then read a little Austin 3:16?

Those days are past now and in the past they will, unfortunately, remain. 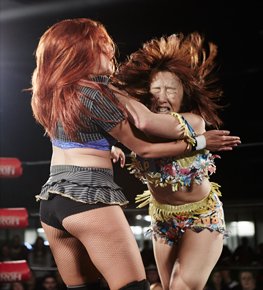 Sumie Sakai and Veda Scott in action in Ring of Honor in Lockport, NY. Photos by Andrea Kellaway

The Ring of Honor show I watched in Lockport, New York, had a feel to it of anticipation. There was that crackle of electricity in the air that hyped the fans. We knew we would see something special and we did.

When I first arrived at the show I talked to the ROH rep about that night’s card. He looked a little nervous and whispered to me that they were short a Buck and the Brisoces were not there. He shrugged and said they would do their best. When I have heard those words from promoters before, I have always been disappointed. If John Cena, Randy Orton and Rusev missed a show they were all advertised on there would be a visible decline in fan excitement and match quality. Not with ROH.

This writer was impressed by the family friendly show that mixed the best of the ROH regulars with some local talent that were desperate to get noticed and there was never a decline in quality or energy.

Recently Pro Wrestling Illustrated released its list of the top 500 wrestlers of 2015. It ranked the ROH World Champion 17th. After watching Jay Lethal pour his heart into his match and deliver an amazing performance I can say his 15 minutes in the ring was a highlight of my wrestling watching week. To me he proved that 17 is way too low for such an accomplished grappler.

His physically punishing style mixed with high flying moves exhilarated the Western New York crowd in a way that was not duplicated on RAW. Why? It is simple really. Jay Lethal and ROH have the magic. They work harder, longer and better than the big boys. They appreciate their fans and see wrestling not just as a sport, but as an art form.

Lethal’s opponent for the evening was ECW original and former WWE superstar Stevie Richards. Sometimes, when a former star wrestler is used, you can expect any number of bad things to happen. Will they be in shape? Will they work evenly with their opponent? Are they there to entertain the fans or to get a quick payday?

Richards answered all of those questions very quickly as the sleek and chiseled wrestler made it evident that he was there to wrestle. Lethal was blessed to have an opponent of Richards’ calibre as both men exchanged holds and cut a blistering pace in the ring. 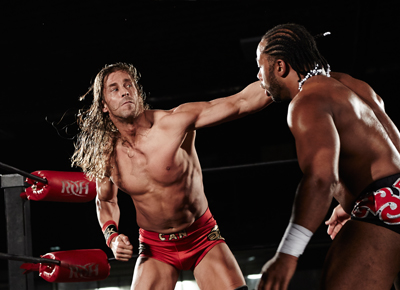 Stevie Richards and Jay Lethal go at it.

Very early in the match Richards and Lethal were covered in a thick sweat that was the result of hard work and a humid arena. Lethal’s attack seemed to focus on the neck and upper torso of the challenger and he would come back to headlocks to wear Richards down. This match was a blueprint for today’s wrestlers. It combined old fashioned body part work and high impact moves that made sense to the story of the match.

Lethal’s speed was amazing! At one point he had Richards on the outside of the ring and he dove at him through the ropes. Quickly, he slid into the ring to repeat the maneuver and he then repeated it again. The crowd reacted positively to the athleticism of the champ.

Not to be forgotten are Richards reversals and ring savvy. The veteran of many ring wars showed that he can keep up with the superstars of today, matching them hold for hold. At one point Richards put Lethal into a crossface submission. The champion slowly worked his way out of the hold and turned the tables on Richards and soon landed his flying elbow from the top rope. The two wrestlers went for pinning combination after pinning combination that resulted in many near falls and raised the excitement level of the crowd. In the end Hendricks handed her high heal shoe to Lethal which he used to whack Richards across the back of the head while the referee was distracted. Lethal scored the pin and the crowd roared in appreciation of the spectacle they witnessed. Again, it was the magic. Both wrestlers connected with the crowd and took the best each had to offer to make a wonderful match.

The crowd love was evident when Moose went to the ring. I attended the ROH show with a couple of friends who knew very little about the product. When they saw Moose they were drawn in by his charisma and were soon chanting “Moose” with the crowd. Each time Michael Elgin and Moose exchanged blows the crowd chanted the name of the man who threw the punch. These wrestlers on the “B” circuit had the fans invested in their match. They cared about the outcome. People loved and appreciated the effort.

Roderick Strong, who defeated Watanabe, was very enthusiastic about the event and his match. “I do this for the people,” said the ROH veteran. “Each match I set a new goal and the fans keep me excited.” The fans, not the pay cheque, not the script writers, not a CEO keep the wrestlers pumped up. At Ring of Honor you can feel that truth. The magic of professional wrestling is still alive with ROH.

If the WWE and ROH had a show on in my city, on the same date and at the same time it would be an easy choice. I would take ROH any day of the week. I love wrestling that draws me in and makes me want more. ROH wrestling is certainly less talk and more action and that is the way I like it. The magic is in Ring of Honor.

Caleb Smith had a fun week of watching wrestling. At the ROH show he talked to some of the local wrestlers from Empire State Wrestling such as Vince Valor, Mat Milan and Coconut Jones. Also in attendance was the two time Canadian Haggis throwing champion Derek Gallacher and Niagara basketball coaching legend Kerry Felstead.