Percival Al Friend was a friend to all

Percival Al Friend, who died September 23, 2015, at the age of 70 after complications from a heart attack, lived for the wrestling business. He was a fan who became a manager after an in-ring career didn’t work out. But he never stopped being a fan, and keeping others in the loop.

He was, indeed, a friend to all.

At the Cauliflower Alley Club reunions in Las Vegas over the past decade, where he was a familiar face, fanny pack around his waist, he’d be quick to whip out his cell phone and dial someone at home who wasn’t able to be there. He’d put Lord Littlebrook on the phone with Bob Orton Sr., or any number of other connections that he made. 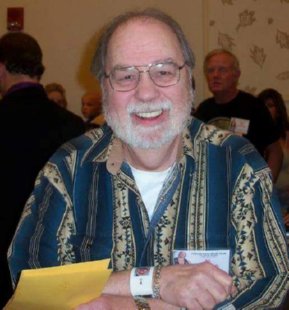 The other thing he became known for at the CAC events was his love of cribbage. Friend would be the one strong arming you to sign up for the crib tournament.

A native of Flint, Michigan, Friend was born on June 26, 1945. He was a wrestling fan, and eventually befriended Ed Farhat, better known as The Sheik in the mid-’60s.

That would lead to a variety of gigs in wrestling, including refereeing – once he realized he wasn’t really cut out for the bumps.

By the late 1960s and early 1970s, he was manager Percival Al Friend, working primarily in the Kansas City territory and in Texas,

He is most associated with Black Angus Campbell, a hulking Scot that he managed.

In The Pro Wrestling Hall of Fame: The Heels, Friend recalled that he wasn’t exactly impressed when he walked into a Calgary, Alberta, hotel in 1971 to hook up with Angus Campbell. “Now, I had never met him before. And I look over at a table and there’s this monster sitting there with the long beard and his hair pulled back in a ponytail. He looked like nothing you’d ever seen before. I said, ‘Good Lord, what is this world coming to?’”

Of course, the fearsome character turned out to be Campbell. He might not have looked like much physically, with his craggy appearance, unkempt mane, and buggy-whip arms, and his Irish brogue was barely understandable. But his unique style caused headaches for North American opponents throughout the 1970s.

Campbell shot to the top almost upon his arrival and was two-time North American champion for the Calgary promotion in 1971. A year later, he headed to Kansas City, where he won the territory’s heavyweight crown. In addition to his grappling skills, he liked to aggravate fans by implying he was concealing some kind of illegal goo. “He would take his thumb and his finger and run it inside his tights like he was getting something. Then he would rub it in his hair and sling his hair in the guy’s eyes. Of course, the guy would fall out of the ring and grab at his eyes. It worked beautifully,” Friend said.

Friend had a story on everybody, and was always quick to share a story or a photo with this website when someone was in the news, usually another wrestler passing away.

Pat O’Connor was part of the promotion in Kansas City.

“He got a little upset at me the first day I was in Kansas City,” Friend once told this writer. “We were doing promos and I called him ‘Fat Pat.’ Phew. Wrong thing to do. [Bob] Geigel, he laughed. He thought it was really funny. Pat turned around and smacked him, and said, ‘I don’t think it’s a bit funny. I ain’t fat!’ I got some real heat with them.” 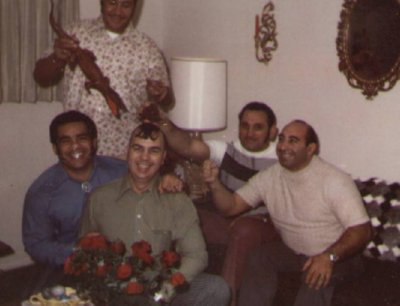 Al Friend sent this photo along after the passing of Argentine Zuma. That’s Friend with the funky haircut in the centre, and Zuma on the far right.

The reunions with old friends, whether they were in Las Vegas, a legends show close to his Michigan home, or at the Pro Wrestling Hall of Fame in Amsterdam, NY, were special to him, because they brought so many memories back.

When notorious shooter Gordon Nelson died, Friend sent along a photo of him and Nelson and Jack Brisco at a CAC event. It prompted a Friendly story: “Gordon made the comment when he seen me that he was my tag partner against the Love Brothers in Dayton, Ohio and that I got the stuffings beat out of me and that he saved my carcass that night. We laughed and shared a drink afterwards. He was a good guy.”

It gutted Friend that he couldn’t make the most recent CAC in April 2015. He had had a number of health scares in recent years and health updates were regular events on his Facebook page.

“I certainly wish that I would be able to make the trip to CAC next week… It will be my first in 15 years of not being able to be there,” he wrote to this writer just before the event. “Please give my very best to everyone …The main reason I cant go is because my new leg isn’t ready yet and I didn’t want to travel in a wheelchair … I know I would have had a lot of support from all my friends there I just didn’t want to be a burden on everyone.”

Greg Oliver has many memories of Al Friend — Facebook chats, his bad jokes in Vegas … but nothing will top a weekend in Flint, where my wife and I went to the famed Zehnder’s of Frankenmuth for a feast. Rest in peace, Al.