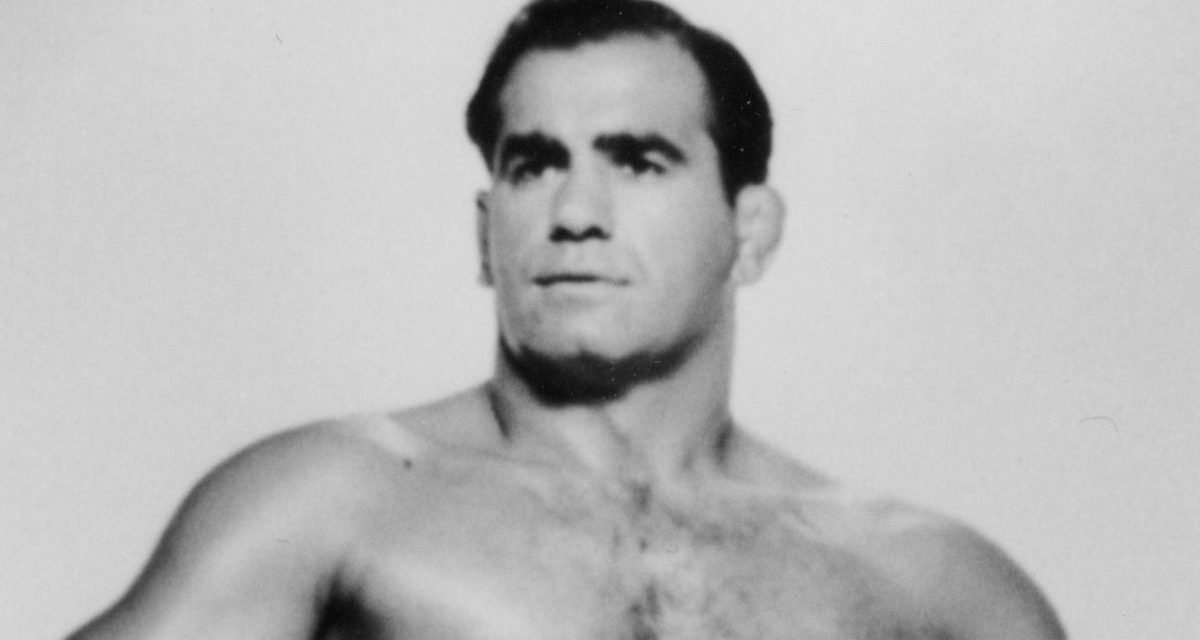 WATERLOO, IOWA – Flipping through scrapbooks of years gone by, she was flooded with memories of trips to Japan, stories from the road and her adoration for three-time NWA World Heavyweight Champion Lou Thesz.

Charlie, Lou’s widow, recently relived the ins and outs of her St. Louis native’s life and career from their time together to B.C. — Before Charlie — in a cramped office space amid the hustle and bustle of the George Tragos/Lou Thesz Professional Wrestling Hall of Fame weekend.

“Lou had a whole life,” Charlie recalled, paging through the books she donated to the Dan Gable Museum. “He was 57 when I met him, but I knew all the stories.” 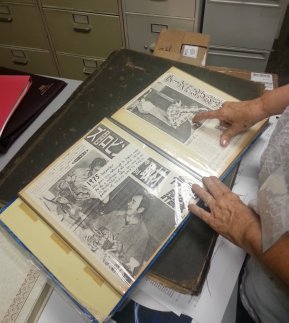 Charlie Thesz flips through one of Lou Thesz’s scrapbooks. Photo by Kari Williams

Some of the scrapbooks contain photos of Lou and Fredda, his wife prior to Charlie. As she scanned through those, she recalled with a laugh telling Scott Teal, J Michael Kenyon and Kit Bauman, who were involved with Lou’s biography, Hooker, that Fredda needed to be included in the book because they were married for 30 years — “It has to be in there because she was gorgeous, so that all the other ordinary girls out there can know that sometimes we get the hunk too!”

Most of the compilations Charlie donated to the museum prominently feature Lou’s time in Japan and contain photos with Japanese wrestler Rikidozan, who Charlie said was “such a force in Lou’s life.”

“(Lou would) tell me stories about Rikidozan every time this picture came up,” Charlie said, “and we were at a friend’s wedding in Japan and we were going through a book that had this picture in it. And one of the Japanese guys said, ‘This is Mr. Ito. And I said, ‘Who is Mr. Ito?’ and he said the prime minister of Japan.

“Lou didn’t feel he was worthy of mention, I guess, in the picture,” Charlie said. “You know, if you had your picture taken with the prime minister of something, you would definitely mention that that was the prime minister. But no, not Lou. Only Rikidozan.”

A couple scrapbooks that feature Lou’s Japan excursions were created by Koji Miyamoto, a fan of Lou’s career who Charlie said became like a son to the NWA champion. 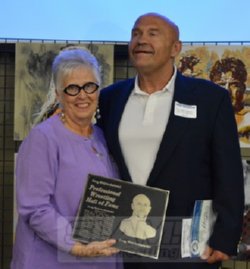 “Lou Thesz represents what pro wrestling is all about. Speed, stamina, skills, showmanship, good looks, champion charisma,” Miyamoto said. “I wanted people in (the) U.S. and Japan to remember Lou Thesz as the greatest pro wrestler of all time. Otherwise, people might remember Hulk Hogan as No. 1 pro wrestler. He is a joke. Cartoon.”

Scanning the photo spreads of Miyamoto’s creation rekindled memories of Charlie being one of the rare wrestler wives to appear in a magazine.

“Bill (Apter) and at that time his girlfriend, (Andrea), who he eventually married, were visiting for the weekend on our beach house, and Lou and Bill went down to the beach. And Lou sent me up to get his belt. So, being the smartass that I am, I put the belt on my hips — I was much thinner then, thank God — and I came down and I’m posing with the belts, and I’m doing this,” Charlie said, mock posing, “and Bill takes my picture.”

Other fond memories of Charlie and Lou’s overseas adventures returned to the forefront as a photo of Lou pretending to eat a snow crab caught her eye. She then recalled her first trip to Japan.

“We’d been together, what, maybe a year, so (Lou) was really eager to impress me, and, of course, it wasn’t very hard,” Charlie said. “I had never been to Japan, and I’d never been overseas. I was just like a little kid in a candy store. But he walked up to a lamppost and he did that little trick where they bring themselves up straight, and of course the guys with us snapped the picture.”

But Charlie said “some jackass” came up and told them there’s a trick to that feat.

But back in the ring, Charlie said Lou was treated with the utmost respect.

“Everyone recognized him. They all had these big, white cards with the gold border and they would want his autograph, and they would say, ‘Oki, oki big.’ And he would sign these, and they called him the eternal iron man.”

Around his 70th birthday, Charlie said, Lou was refereeing in the Tokyo Dome for a standing-room only crowd on a night that featured Jeff Blatnick and five Olympic Russian wrestlers.

“When Lou walked out, everyone came to their feet and that was just almost a frightening experience. And then I started making jokes and saying, ‘Would you people sit down? I have to get him on an airplane!'” Charlie said. “But he never knew it. He was so focused when he walked out to work. That was his job. He was focused. There was no peripheral. He really had no idea that all of those people came to their feet. He never noticed it. Because he loved what he did.” 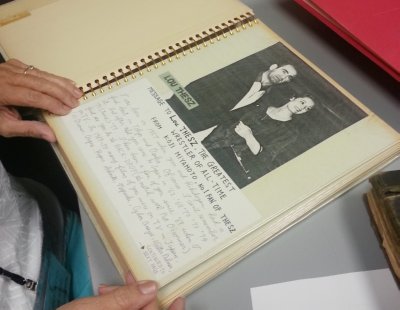 Charlie also recalled spending a lot of time making suits for Lou, who she said was “hard to fit.”

“And they didn’t have the options that they have now. And besides that, I enjoyed it,” Charlie said.

She first started making referee pants and shirts, then upgraded to suits.

“I’d take the sewing machine on the road and while Lou wrestled I’d sew,” Charlie said.

One such suit consisted of a denim color in plaid that she said “looked good for the time.”

“That was navy blue and white. I made that for him. Lou chose the fabric, not me. And it was trimmed in navy blue, and … I kept calling him Herb Tarlek,” Charlie recalled, referencing a character from WKRP in Cincinnati.

A second suit she made from black, gabardine fabric with a “little bit of shine to it.”

“When we were in Nashville for the CMA awards, we couldn’t find a tuxedo to fit him. So we rented the shirt and the shoes, and the cummerbund and he wore this leisure suit that I had made him,” Charlie said, “but this was kind of a shiny nylon knit and I bought that fabric in Mexico. It was black and white. Oh God, it was loud.” 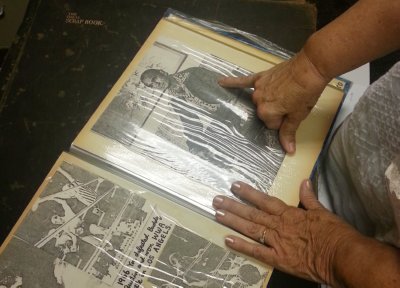 As the memories drifted to and fro, Charlie’s thoughts returned her to the present day, sitting in that cramped office space in the Dan Gable Museum, where she said it was never about the praise or stature for Lou. It was always about wrestling.

“And that’s the reason he just was so amazed at this museum, and his friendship with Dan Gable,” Charlie said. “I think, in his later years, he felt like this was an achievement. Not for himself, because, trust me, he couldn’t have cared less for himself. But it was about wrestling.”

Miyamoto said his scrapbooks add the “legacy of the greatest pro wrestler” to the museum.

“I am 58 years old soon. I don’t know when I (will) die, but I want someone to perpetuate Lou’s achievement after me,” Miyamoto said. “Because without the name of Lou Thesz, pro wrestling business has been — still is — dead. I want pro wrestling to keep alive forever. So someone must take over my task.”

Charlie said she donated the scrapbooks about three years ago because it’s “where they belong.”

“You don’t need everything for memories. It’s wonderful to go through this and remember things, but I am not kidding you — I have boxes and boxes. Most of it is crap, but there’s some treasures in there,” Charlie said.