Missed opportunities, divorce and regret can turn a person’s world upside down — especially when that person is trying to break in to the world of professional wrestling. But for someone like Latin Thunder, an Iowa-based independent wrestler, he took those struggles and bettered himself instead.

He documents the highs and lows of scratching and clawing through the independents for a chance with WWE and, ultimately, not reaching that career milestone. Latin Thunder: My Journey off the Top Rope, provides insight into this side of the industry that often goes unnoticed by national media –those who continue to live their dream despite not reaching the No. 1 company. Latin Thunder is an open book. He takes readers along his journey, from being training by Skandar Akbar to missed opportunities, every step of the way, devoting chapters to key players who advanced his career, such as Akbar, Harley Race and Impact Pro Wrestling’s Troy Peterson. 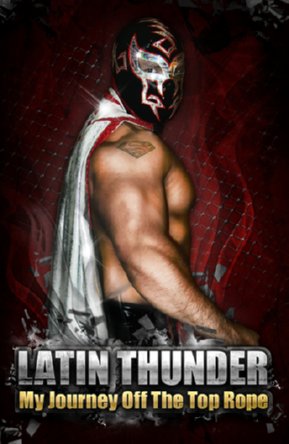 Latin Thunder holds nothing back, especially in detailing how hard breaking in to the businesses is and the strain it puts on other jobs and relationships. He details the divorce from his first wife and owns up to his part in the separation.

At one point, he recalls a conversation from an interview for a job he was trying to secure:

“I told him I had always left those other jobs for wrestling, and that at the age of 26, I didn’t feel I was ever going to wrestle for the WWE. Getting a job at the WWE was like trying to be a rock star or a NASCAR driver, and it just wasn’t happening.”

While hindsight shows he was aware of missing opportunities that could have led to a bigger stage, there’s not an air of frustration or regret. Just reality. He states facts, and proves that everything happens for a reason. As such, Latin Thunder’s story becomes not the triumphant tale of someone who struggled for years and finally made it to the pinnacle that is WWE, but rather, a story from the grounded perspective of someone who refuses to stop chasing his dream, regardless of where that dream ultimately leads him.

And though it’s not the page-turner with stories from the road that some come to expect from wrestling biographies, Latin Thunder takes a different approach that’s still engaging. He tells it like it is, acknowledging his own faults — in his career and personal life — while bringing a refreshing honesty to the pages of his story.

The biggest downside was that another layer of proofing could have caught the handful of typos sprinkled throughout the text.

Regardless, Latin Thunder brings a no-holds-barred approach to the wrestling biography genre, proving that just because you don’t work for WWE doesn’t mean you’re not able to live your dream.