Destruction of the Shield DVD: Too soon but great history of the trio

Sierra! Hotel! India! Echo! Lima! Delta! When you heard that call sign, you knew everything was about to get turned up a few notches because the Hounds of Justice were coming to the ring. Easily one of the most popular factions in recent memory, The Shield ran roughshod in the WWE until their somewhat unexpected dissolution by current WWE Heavyweight Champion, Seth Rollins. With WWE’s The Destruction of the Shield DVD we get a look at the origins of the group including interviews from all three members. 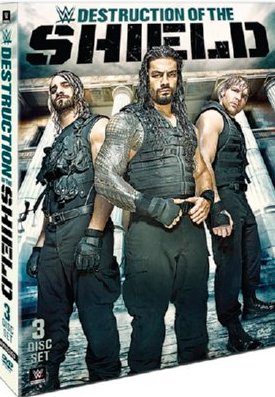 This DVD came out before WrestleMania 31 and honestly was a little hard for me to watch at first for two reasons. The first one is simply given the popularity of this trio (Dean Ambrose, Seth Rollins and Roman Reigns), there is no doubt that somewhere down the line all three will team up again so by advertising this as the definitive end of the group just feels wrong. The other is because ‘Mania had yet to come, it’s clear throughout the DVD that Roman Reigns was being pushed as the Chosen One of the group. Obviously WWE has gone through a lot of thoughts since then because depending on what month it currently is, all three of these men are in contention for the WWE Championship as singles competitors.

Personal complaints aside, this is one of those compilations where the bonus features, specifically the matches, are the real story of this DVD. As part of a three-disc set covering about seven and a half hours, basically every high-profile match The Shield had as a team during their run in WWE is included. This is a tricky proposition because if you already have the WWE Network, you have access to all of these matches. However, Ambrose, Reigns and Rollins do interviews about each match featured, something that you can’t see on the Network, so learning more of the history is always interesting.

That being said, the bonus features aren’t restricted to just matches and spots that happen in WWE proper. All of these matches are not available on the WWE Network so if you want to see how these guys have developed, it’s worth checking out. Going all the way back to when NXT was still known as FCW, there are some interesting matches. People often forget that The Shield wasn’t even a unit until they were promoted to WWE so the majority of the FCW and NXT matches involve the trio as opponents in some form.

A personal favorite of mine was the trio of matches between Dean Ambrose and Seth Rollins battling over the FCW 15 Championship, also known as “The Jack” in honor of Jack Brisco. The Jack Championship is basically defended as a mini Iron-Man match with the winner having the most falls during a 15-minute time limit. It’s a concept I actually would like either WWE or NXT to bring back simply for the added bonus of potentially seeing multiple falls happening rather than just one fall to a finish.

As stated before, I’m sure this isn’t the only time these three guys guys will be a cohesive unit. I think of Degeneration X breaking up several times only to reunite. So while I disagree with the main DVD portion being shown as a definitive history of this faction, all the FCW and NXT matches are fun to watch. If you enjoyed their initial run, the bonus features alone should be enough reason to check out this DVD.