The sun has disappeared from the sky and dusk has arrived. The crowd’s excitement grows for the night of wrestling action ahead of them. The noise is an almost palpable thing as the fans await the mayhem. It is at that moment that one man steps into the squared circle carrying his trusty microphone as he has done throughout British Columbia for the past 15 years. That man is Scotty Sweatervest.

To Vance Nevada, Sweatervest has been and is the voice of wrestling in British Columbia. 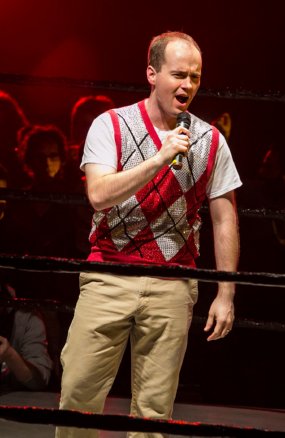 “In my mind, there was no greater talent, in any capacity, that I ever had the privilege to work with than Scotty Sweatervest,” Nevada stated emphatically. “He’s the greatest man on the mic that Canadian wrestling has ever seen. To me he’ll always be one of those overlooked talents who should have been picked up by a major television network. When I think back on the greatest moments of my career, they’re narrated by the inimitable Sweatervest. There was no doubt who I wanted calling the matches at ringside when I competed for the NWA World Championship. I can close my eyes and re-live those highlights solely through the words and emotion of my friend Scotty — the best in the business.”

For Sweatervest, that NWA World Championship match between Nevada and the champ, Adam Pearce, remains a career highlight.

“Everything that day clicked from the pre-match interviews with both men, to ring introductions, to doing the commentary,” Sweatervest called to mind enthusiastically for SLAM! Wrestling.

“I had goosebumps through it all … and when the match was over, I have never been more physically exhausted from calling a match. Not because it was difficult, but because it was so magical.”

Another that Sweatervest has loved working with in terms of his ring announcing work has always been “Gorgeous” Michelle Starr.

“His character is so easy to have some fun with and having the opportunity to introduce him in his retirement match a few months ago was an intro that meant the world to me,” Sweatervest said with a great deal of joy.

“Vance Nevada and I have always had some fun back and forth interaction inside the ring and I can’t help trying to make Kyle Sebastian cuss me out in the ring for making him laugh when I shouldn’t. Other favorites, for reasons both inside and outside the ring, include Disco Fury, The Great Kasaki, Christopher Daniels, Adam Pearce, Artemis Spencer, and El Phantasmo. I can honestly say that I’ve enjoyed working with 99% of the people I have.”

That is just a tip of the iceberg in terms of the memories and talent possessed by Sweatervest, but it leads to inevitable question of how does one become an announcer/commentator in professional wrestling? To answer that question one has to look back at an aptitude test that Sweatervest — real name Scotty Kuipers — took in high school that said that he should go into theatre and announcing.

“From there, the school guidance counselor got me set up to do the announcing for all of our sports: football, volleyball, basketball, wrestling, track & field,” recalled Sweatervest.

“I continued doing that for about 10 years after graduating because I was making myself known doing the school sports. When I graduated, there was an opening at our radio station. Through knowing somebody who knew somebody, I was given the job and worked my way up from there. I did take broadcasting and communications classes in college, but 90% of what I’ve learned both in radio and wrestling I learned on the job.”

It was through his work in radio that ultimately led Sweatervest to getting his start with Extreme Canadian Championship Wrestling. At first they would use him as a ring announcer when a show was being run in his town, but after a while he started getting more and more bookings until he was the regular announcer for the promotion.

“They were my main source of bookings for several years basically because it was the only promotion for a time,” recalled Sweatervest.

“After moving out of the area for a year, I came back in 2009 and found that many other promotions had popped up, including a renewed All Star Wrestling. I was friends with Michelle Starr from his days as owner of ECCW, and have been able to continue announcing his shows. I’ve also announced for Vance Nevada’s CNWA in Red Deer, Alberta, and through that for MPW, PPW, and GDW. There have been a number of promotions in Washington, Oregon, California, Ohio, and Florida, as well.”

To Michelle Starr, Sweatervest is the most professional announcer that he has worked with over the years.

“I am proud to consider him a good friend,” Starr said. “I never have to worry about his performance or what he is going to say. A true pro!”

While most might think that the process of being an announcer isn’t that complex, there is in fact a fair amount of preparation beforehand.

“Usually, when I get to the building, I make my rounds to say hello to everybody,” detailed Sweatervest.

“Then, I get the card and any special notes the promoter has and transfer that information to my own index cards. If there’s any weight/hometown information that I need, I track down the wrestlers to get that information. From there, I get dressed, make sure I have everything in order, and wait until it’s time. The last thing I do before going through the curtain … check my fly. I can’t imagine how embarrassing it would be to have my fly down in the ring. One time, I was asked if I ever get my cards out of order. I pointed out that I number the order in the corner of the card, so that it doesn’t happen. Sure enough, that night, I stumbled getting in the ring and dropped the cards all over. It took some time to find the right card and get everything back in order.”

Let no one think that this means that Sweatervest hasn’t found himself directly involved in the action inside of the squared circle.

“My first, in 2004 with Just Wrestling, was by pure chance. Marty Sugar hosted an interview segment that featured Vance Nevada and Disco Fury. When Marty started running his mouth, Vance was set to punch him. He suggested to the crowd that I do it instead and the reaction from the crowd led to a tag team match the following month. In more recent years, I’ve wrestled a couple of tag team matches. One match, with Randy Myers and Nicole Matthews versus El Phantasmo and Alex Plexis, saw me ‘Hulk Up’ on my opponents by tearing off my sweatervest to reveal ANOTHER underneath. I wrestled again in a six-man tag with El Phantasmo and Tony Baroni versus Alex Plexis, Ethan HD, Mike Santiago, and Kristopher Kassidy last November. I’ve also been known to dish out a ‘Sweatervest Stunner’ or ‘Announcer’s Elbow’ if the actions of certain wrestlers get too out of hand. I will say that after my few matches, I’m glad I have a job that’s easier on my body than the wrestlers. Much respect for anyone that is willing to get in the ring. It’s tough work.” 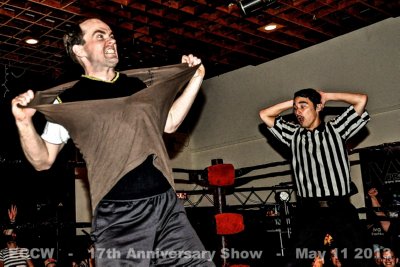 In addition to his work in professional wrestling, Sweatervest works for Bellingham, Washington’s Saga Communications, which owns five radio stations. He’s the company’s Promotion Director and is the afternoon drive host on KAFE. He’s also called upon to do commentary for local high school sports. Then there’s ring announcing and interviewing for combat sports, like boxing and MMA, but wrestling remains his favourite. So with all that in mind when Sweatervest was asked what his ultimate goal was in professional wrestling he provided a very thoughtful response.

“I would be lying if I didn’t say I would love to be signed to a contract, but I’m not picky on what company,” declared Sweatervest.

“At this point, my main goal is to have fun. I get to have the best seat in the house for something I’ve loved to watch for the majority of my life. I’ve seen guys that take wrestling so seriously that they become bitter and jaded to what made them a fan in the first place, which is sad.”

In a lot of ways, it is that love for professional wrestling that may explain why so many hold Sweatervest in such high regard, such as former WWF referee Kevin Jefferies.

“Scotty Sweatervest is with a doubt a very important part of pro wrestling in and around British Columbia,” said Jefferies. “The man has a great personality, great voice and he knows the business of pro wrestling. There is no one better to intro a pro wrestling event on any given night than Scotty. The power of his voice along with what he puts into it is over the top for announcers; also, along with being a great friend to many in this business, not only here in B.C., but around North America.”

Still as the interview wound to a close one mystery remained which was how did the name “Scotty Sweatervest” come about?

“It was all the crowd,” elucidated Sweatervest.

“When I started, I happened to wear a sweatervest to a couple of shows in a row. When I walked out to start the show, a few fans in the front row started a ‘Sweatervest’ chant. As soon as I walked into the back, the promoter told me to go buy some more sweatervests and only wear them from then on. For the first several years, I only had about two or three that I would rotate through, but now I have a closetful of sweatervests. I have to give credit to my wife for giving them a little more style by making the argyle sparkle and writing my name in sequins on the back.”