The magic of “The American Dream” Dusty Rhodes is the stuff of lore. It is the story of a plumber’s son born from Austin, Texas, who rose to become one of the most famous wrestlers in history, a man who oozed personal magnetism, vanquishing foes with elbows and jiggles, his doughy arm raised in victory more often than not, blood clotting on his scarred forehead, blond, curly hair a sweaty mess. Behind the scenes, he brainstormed, created, encouraged and manipulated, making him one of the most influential minds as well.

With his death today at age 69, the world has lost a giant.

“He was the most charismatic athlete I ever wrestled in my life … bar none,” said Ric Flair, whose career intertwined Rhodes’ both inside and outside the squared circle, in The Pro Wrestling Hall of Fame: Heroes & Icons.

The WWE website reports the following: “WWE is deeply saddened that Virgil Runnels, aka “The American Dream” Dusty Rhodes — WWE Hall of Famer, three-time NWA Champion and one of the most captivating and charismatic figures in sports entertainment history — passed away today at the age of 69.”

Rhodes had faced numerous health issues recently, including a battle with stomach cancer. Dave Meltzer of The Wrestling Observer is reporting that he “had a fall at his house earlier today and his kidneys were shutting down and he started to get dehydrated.” 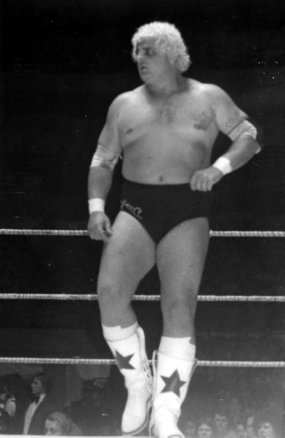 Besides being one of the biggest stars in pro wrestling — ever — he was father to pro wrestlers Goldust (Dustin Runnels) and Stardust (Cody Runnels). He also had two daughters, Kristin and Teil.

Rhodes leaves behind a different kind of legacy behind with the successes of his sons in pro wrestling. “I don’t serve anybody or do anybody good trying to be Dusty Rhodes Jr. There’s just a vast difference between the character that was the American Dream and Cody Rhodes, across the board,” Cody Rhodes told a New Brunswick newspaper in 2010. “I get asked if I’m adopted a lot.”

Virgil Runnels was born October 12, 1945 in Austin, Texas. He was a fan of pro wrestling, and eventually broke in, in his home state. He’d played a little football at West Texas State and then in the Continental Football League, but dreamed of individual stardom. Gary Hart, involved behind the scenes in Dallas, took a chance. “I started him, I gave him the name,” said Hart. “He came to Dallas, Texas and said that he wanted to start wrestling. I helped him get booked, and I watched him a few times and the guy was excellent. He had fantastic charisma, and I told him the name Virgil Runnels wasn’t very good.” Despite the fact that there had been a baseball player known as Dusty Rhodes, Hart’s idea came from the Andy Griffith movie Face In The Crowd, where a character’s name was Lonesome Rhodes. “I’m more proud of what he accomplished than anything else,” said Hart.

Gaining experience in Texas, Ohio and Kansas City, Rhodes said there were some key, unsung heroes that really helped him out. He’d watched Nick and Jerry Kozak as a fan, and now he was being ribbed by them.

“I got back to the Alamo Plaza Hotel in El Paso, and they’d broken into my room, and I didn’t know it. I turned back the covers and in the bed, they had taken a sack of potatoes and emptied them all in my bed,” laughed Rhodes. “I went to somebody and said, ‘What is a potato mean?’ They told me, ‘It means you’ve got to loosen up a bit.’ Then I had to go to somebody else and find out what loosen up meant.”

In the car, he listened to the advice of The Beast, Yvon Cormier. “You cannot imagine how instrumental this guy was in my career,” said Rhodes. It was Cormier who taught him to single out a fan in the crowd who was dragged there by his buddies, and was reluctant to get caught up in the act; that was who you aimed to get out of their seat. “I would pick out one guy that was a real asshole, you could tell it, and I would watch him. As the night went on, I could see if I got him for that moment, that he suspended his disbelief and really believed in what was going on in there.”

But it was The Great Mephisto (Frankie Cain) who really saw great things in Rhodes. “He knew, and what I didn’t figure out back then as a [heel], was that I was going to be a babyface, so he was taking care of his big babyface without me knowing it. He was kind of pre-loading my brain for what he wanted to do to get over. You know what I mean?”

In Kansas City, he began teaming with Dick Murdoch as the Texas Outlaws, and learned to live life to the fullest. Though both were 22 years old, Murdoch, the adopted son of wrestler Frankie Hill Murdoch, had been wrestling since he was 16, and was able to teach as well as raise hell.

Rhodes learned to really work the crowd in between the two cases of beer a night. “The fans, the audience, the universe, they’re not going to let you come back until you’re ready. It’s like tuning a guitar by ear. I know that Murdoch and myself in a tag match, when it would be time for the babyfaces to make their comeback, if they, the fans — Murdoch taught me this — if they weren’t ready, he’d cut them off,” said Rhodes. “He’d just cut them off until it was right for that huge explosion at the end of the movie. There’s a fine line there. You can sell your ass off to where they wanted you to come back, but you went too far to where you just died and they’ve lost interest in you. That’s the art of the game.”

Through a career that spanned decades, including two runs as NWA World heavyweight champion, Rhodes was a master of the art.

No wonder then that he was called upon by WWE to teach at its training facility in Florida. The Dream was called upon to teach the art of the interview. “I like seeing young guys do well, whereas before it was me, and about me, I took the credit, but now it’s about our developmental system,” reflected Rhodes in August 2001. “I’ve really changed. Age can do that to you.”

Despite his health issues — and subsequent weight loss — Rhodes was always upbeat and was at the WWE Performance Center as recently as last week.