Roughly a month into his tenure, Micah plans to rise to the occasion Friday night at Total Nonstop Action Wrestling, live on Destination America.

Micah, a member of The Rising with Drew Galloway and Eli Drake, said Wednesday that while he doesn’t yet know the extent of his involvement on the show, he’s looking forward to it and hopes to meet up with the Beat Down Clan. 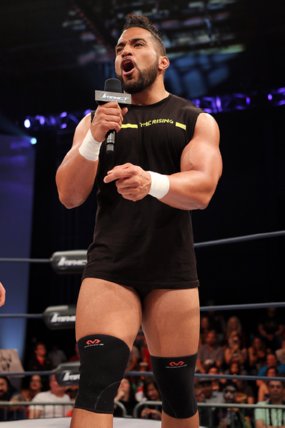 “With The Rising (and) #StandUp, all of the members of The Rising, we’ve all experienced a point in our lives where we just were not feeling, so to speak, accepted. Maybe feeling as if it was us versus everyone else,” said Micah, who has been feuding with the BDC in recent weeks. “Especially, where we came from before, where it felt like our voices weren’t being heard. And we — definitely coming to TNA — we have an opportunity to be ourselves and stand up for what we believe in.”

But as far as performing on a live show, Micah, who previously worked for WWE from 2009-2014 as Camacho, said his past experience means such a situation is “nothing new.”

“I think everyone who’s been part of TV though understands that you have to be prepared mentally and physically … (and be) ready at all times,” Micah said. “I know talking about it with Eli and Drew, we look forward to it. It’s an opportunity for TNA and The Rising to showcase our talent in front of a live audience, and it’s more exciting, I believe, when it’s live because anything can happen at any time.”

But because of that aspect, Micah said “everyone has to be on high alert.”

“I know when we used to talk with production about preparing for the live show, (they) usually (would) tell us keep cool and calm if anything should happen that just wasn’t part of the show, just keep your head about you,” Micah said, “and the real thing is the show must go on.” 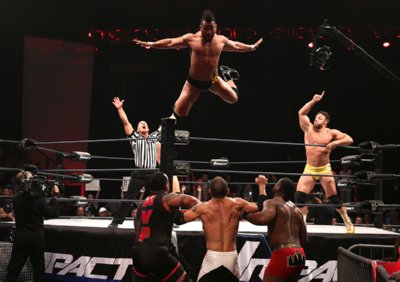 Micah takes to the air.

Audiences, according to Micah, are “more involved” during live shows as opposed to tapings.

“Right at that moment the camera could be on them and their friends and family. Basically, the whole world can see them and they get to be more involved in the show when they know on the second that someone’s watching them,” Micah said.

Compared to previous companies, Micah said at TNA the stars are “there to wrestle and put on a good show.”

“When we compete with each other, we compete to get better. I feel at times when we were at the other company, it really was dog-eat-dog,” Micah said. “At times, (you) sort of got lost in the shuffle … (With) TNA, everybody knows what they’re there for.”

Micah said he appreciates TNA “taking a chance on him” and “will always respect them and honor them” for doing so.

“In return, I plan on being one of their top superstars for TNA. When someone gives you an opportunity, when you are in a place where you don’t feel like being you is accepted, you definitely want to prove your self-worth to someone who took a chance on you,” Micah said.

Part of doing so, according to Micah, is his involvement with The Rising.

“We have a really good chance, a great opportunity to showcase ourselves as a group, but also as individuals,” Micah said, “and I look forward to one day becoming truly a singles wrestler and showing the world just me, what I can do without The Rising.”

The transition to TNA, according to Micah, has “been very good.” In addition to knowing some wrestlers due to his time with WWE, Micah said the main roster “actually opened their arms to us (and were) very welcoming.” 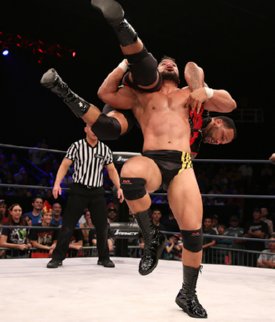 Having been introduced as a member of The Rising just over a month ago, Micah said he would eventually like to step in the ring with the likes of Gunner, Sam Shaw, Bobby Roode and Kurt Angle.

“(Kurt Angle) is probably one of the greatest athletes in the world, then and now, and probably for eternity … and a hell of a wrestler,” Micah said. “Being in the ring with him would be an honor, really.”

Despite his short tenure in TNA, Micah is no stranger to wrestling history. As the son of Haku and brother of Tama Tonga (of New Japan Pro Wrestling), he has been surrounded by the business his entire life.

“What’s great with our dad was (he was) able to separate his work from our family. And our mom pretty much raised us,” Micah said. “There was no expectation for us to be wrestlers. Our parents wanted us to be everything but wrestlers.”

But when Micah and Tonga chose to lace up the boots, Micah said his mother and father were against it, but understood. Many people, according to Micah, expect the brothers to be like Haku. While Haku didn’t talk as much — he focused more on the in-ring action — Micah said Tonga and he “keep some of (their) father’s legacy” within them.

“I know how our father was in and out of the ring when he was traveling, and a lot of people know that he was a good man and they see that already in us when they meet us,” Micah said.

TNA Impact will begin at 8 p.m. CST on Destination America and also is slated to air on Fight Network in Canada. For more information, visit impactwrestling.com.