Cornette and Dillon have a blast revisiting the Mid Atlantic territory

The DVD series Back to the Territories, hosted by Jim Cornette, is getting better each time out. In the latest release, J.J. Dillon is a fantastic guest, with great insight and knowledge about Mid-Atlantic Championship Wrestling. Still the fact Cornette allowed some of the original matches he owns from the territory to be spliced in during the interview makes this release a must-own.

Ric Flair has said some of his best work with Ricky Steamboat was never recorded; well, there is one of those gems on this DVD release. I know you want to go buy this DVD right now, but stay with me for a few more lines.

Because of WCW, we all have some sort of knowledge of Mid-Atlantic taking over the NWA banner and then battling WWE under its new name of WCW. What is the most interesting in this interview is all that period before Jim Crockett Jr. took over his father’s passing — what some will call the golden age of the territory. Jim Crockett Sr. had the reputation of being one of the best promoters in the country, like a Don Owen and a Vince McMahon Sr. Dillon, who actually worked for him, has nothing but good things to say about Crockett Sr. There is no telling how different things would have been if he had not died in 1973.

If some of the matches are the highlights of this DVD, at times there is too much of a good thing. Maybe a commentary track on those recorded by Cornette and Dillon would have made everything a little bit more lively.

Some of the most interesting aspects of their conversation are the explanation on how the territory went from being built around tag team to be built around single stars. Who better than Jim Cornette and J.J. Dillon to tell us that story.

Among the other interesting wrestling footage, there is early footage of Gordon Solie and incredibly rare footage of Gene and Ole Anderson tearing it down as headliners. If you ever heard of the wars between Wahoo McDaniel and Johnny Valentine, well there is one match on that DVD! 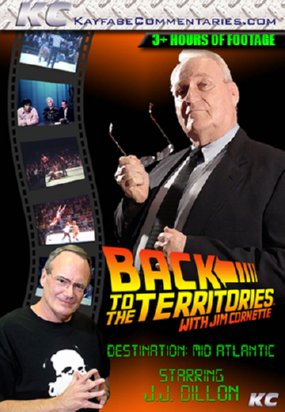 I found that whole period fascinating as George Scott took over and started to pick up talent that would become headliners for years to come. Cornette and Dillon explained the philosophy: “If you give fans great talent that tear the house down, people will come.” When you rebuild like that, you do need patience that things will turn around. “Things will go bad, before they go right.”

Mid-Atlantic did rebound, it is a lesson for today’s product, I believe.

If you like history a little closer to today, the analysis of the national expansion under the NWA banner is also very interesting. I don’t think I ever heard put it quite that nicely before.

“The office of Mid-Atlantic wrestling didn’t expand with the rest of the business. They had the same team running that million-dollar company across the country that had been running the family business running shows in only three states.”

If that type of mistake could have been avoided, it is conceivable according to Dillon and Crockett that Mid-Atlantic could have fought with the WWE toe to toe. Even if the Monday Night War was a dangerous period for WWE they both feel that the Crockett promotions before 1988 was the one era where Vince could have actually lost to a competitor.

But as history showed us even if WCW saviour/owner Ted Turner and his people said that the only thing that would not change was the wrestling operations, it was the first thing they put their nose in before the ink on the contract was even dry.

While Monday Night Raw is getting close, remember that WCW Saturday night was 28 years in the same time slot. People at legends convention still talk about this show. Those legends shows draws better in the core of the territory than current wrestling.

As Cornette says: “It will never be like that again. There will never be another Mid-Atlantic Championship Wrestling, the Camelot of professional wrestling.”

I can’t recommend this DVD enough, and it might just been the most interesting thing I have reviewed for SLAM! Wrestling yet. Also, just like for a good Marvel movie, stay until the credits have rolled out for a small surprise.