When the Cauliflower Alley Club was founded in 1965, at the Baron’s Castle Buffet Restaurant in Los Angeles, those in attendance could not have imagined the legacy they would create. For 50 years the CAC has brought together those who love the sport of professional wrestling for fun, to rekindle friendships, and to help others.

This year’s Cauliflower Alley Reunion takes place from April 13 to 15 at the Gold Coast Hotel and Casino in Las Vegas and will once again be a lively and fun affair. Wrestlers, writers, photographers, promoters, referees and friends of the business will take part in many activities that will bring with it great stories and new memories made.

If you expect to get a ticket now, you would be sorely disappointed, as every ducat has been purchased, a true sell-out. Wrestlers will look around and count the house, and with good reason. The Cauliflower Alley Club is the only 501 c3 non-profit the wrestling industry that helps people involved in wrestling.

Profits from the events go towards the club’s benevolent fund which helps people from the wrestling business in a time of need. 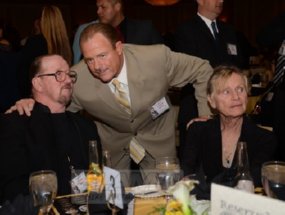 Brian Blair stops by to talk with Terry and Vicki Funk at the Cauliflower Alley Club banquet in June 2014. Photo by Brad McFarlin

“If you have been involved in the wrestling business and making a living in it for five years, in any way, you could receive financial assistance from the Cauliflower Alley Club,” said president Brian Blair. “We don’t tell the general public who we help financially to keep their respect and dignity.”

The funds raised from the banquet, baloney blowout dinner, bowling and cribbage tournaments, seminars, and other events goes towards helping their brothers and sisters.

“Since I have been president, we have helped many people and some of them you would be surprised need our assistance,” said Blair. “It is very moving and has touched my heart and makes me want to do as much as I can for the organization.”

Each year the reunion becomes more popular and it is a who’s who of wrestling legends and current superstars in attendance. “This year we are going to have a sellout and it is happening at a record pace,” said Blair. “You will see two tables that the WWE just purchased. The WWE are supporters of the Cauliflower Alley Club. Seventeen of the very popular, not just legends, but guys who are still wrestling will be there. There will be over 300 wrestlers there from different organizations.”

One of the highlights of the reunion is the awards banquet. Each year the CACA presents awards to the people in the wrestling community that have made an impact. This year the Iron Mike Mazurki Award goes to Larry Hennig, Jerry Brisco will get the Lou Thesz Lifetime Achievement Award, double award winner Dallas Page will receive a Men’s Wrestling Award and the Jason Sanderson Humanitarian Award.

The Family Wrestling Award goes to the Romero family (Ricky Romero, and the Youngbloods), while “The Grappler” Len Denton will get a Retired Men’s Wrestling Award. The Posthumous Award goes to Bruiser Brody and the James C. Melby Historian Award will be handed to Dennis Brent. With a list of award winners like that it is sure to be a couple of fun nights.

While you may not be able to buy a ticket this year, perhaps you need to book time of work and make your vacation plans for 2016. As Billy Red Lyons would say “Don’tcha dare miss it!”

EDITOR’S NOTE: We’ll have interviews with Larry Hennig, Gerry Brisco, and Dennis Brent in the coming days leading up to the reunion. As for the reunion itself, SLAM! Wrestling’s Greg Oliver and Steven Johnson will be in attendance and photographer Brad McFarlin will be contributing images for our gallery.