The Streak: Taker and HHH one last time 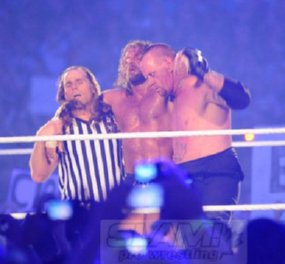 Shawn Michaels and The Undertaker help Triple H from the ring. Photo by Mike Mastrandrea

It seemed like hell had an open house at WrestleMania 28. And perhaps the only thing hotter than the scorching Miami sun was the decade-long rivalry between The Undertaker and Triple H.

Even though Taker was victorious at the previous year’s WrestleMania, it was hard to believe, just by looking at the aftermath. The winner of the match had to be carted away, while the loser was able to walk off on his own. It might not have been an official victory for Triple H, but it was most definitely a personal one.

Not only was The Undertaker unable to leave the ring on his own power, but he was not seen again until the following year. There was actually a rumour floating around the wrestling world at one point that Taker had ripped out his own hair, strand by strand, because of what happened at WrestleMania 27; of course, it was only a rumour.

But all kayfabe news aside, this led to Taker doing something that he doesn’t frequently do. He actually issued the challenge to Triple H for a rematch. Triple H turned down that offer the first couple of times, but eventually agreed to the match on one condition: it would have to be Hell in a Cell.

So the match was set and the stipulation was made, but it still needed one more ingredient. That addition was a very special guest referee, who had history with both men. Enter Shawn Michaels.

Michaels came closer to ending The Streak than anybody before him, but he ended up issuing two challenges and suffering two losses, the second of which cost him his career. Nobody with a brain in their head was expecting Michaels to be the least bit impartial. As heated as Michaels’ feud with The Undertaker was, his loyalty to Triple H was perhaps even better known.

The match started, and the two combatants went at it tooth-and-nail right from the get-go. The cage didn’t come as much into play in this bout, as it did in previous Hell in a Cell encounters, but it served its purpose, which was to keep these three men in, and anyone else out.

Triple H controlled a huge chunk of the match, and just unloaded on Taker with vicious chair shots. He kept turning to Michaels and demanding him to ring the bell. Michaels was about to do just that at one point, but just as his finger touched the trigger, Taker pulled Michaels into the Hell’s Gate submission hold, a move that put away many opponents, including Triple H; but not on this night.

Triple H fell prey to the move as well, at one point, but was able to power his way out of it. Eventually, The Undertaker grabbed hold of the chair, and it was his turn to start swinging away.

But then Michaels got up and connected with some Sweet Chin Music that put the Deadman on his back again. This led to a near fall, which brought the crowd to its feet.

In the latter stages of the match, Triple H struggled to his feet, after all the violent chair shots. In a last ditch effort, The Game brought his trusty sledgehammer into play, but it just didn’t work out the way he had hoped, as The Undertaker intercepted it, and used it to his advantage. Taker then hoisted Triple H up and planted him with a Tombstone piledriver for the final three count.

As shocking as that brutality was, what was even more shocking was what happened afterwards. Michaels and Taker helped Triple H to his feet, and all three legends left the ring together; it was almost as if hell had frozen over.