Of all the former “territories” of the wrestling business, the blood-spattered Montreal region was one of the most fascinating but historically overlooked. 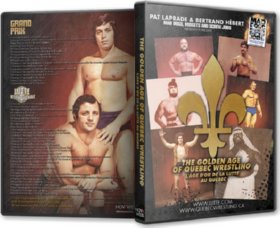 The DVDs are the perfect companion to the book Laprade and Hebert co-authored, Mad Dogs, Midgets and Screw Jobs: The Untold Story of How Montreal Shaped the World of Wrestling. [Editor’s note: Both Laprade and Hebert are occasional contributors to this site.]

Shedding some light on some of the biggest names to emerge from Montreal and the province of Quebec, these DVDs are packed with wild and bloody brawls featuring the likes of the Vachon family, Abdullah the Butcher, Jos LeDuc, the Rougeaus, and Rick Martel.

Volume 1 opens with a series of matches and interviews from Grand Prix Wrestling featuring everyone from Don Leo Jonathan, Killer Kowalski, and The Destroyer to Dino Bravo, Gino Brito, and Gilles “The Fish” Poisson.With Jack Curran and Ray Bucher calling the matches, there’s plenty of English commentary throughout the DVDs, alternating with French commentary and interviews with the likes of Frenchy Martin, Pat Patterson, and Grand Prix promoter Paul Vachon.

Following a bruising battle between Mad Dog Vachon and Edouard Carpentier, there’s a touching tribute to the late Yvon Robert Sr., fittingly presented inside the ring of the Montreal Forum. Elected by the Wrestling Writers Association of America, Yvon Robert Sr.’s family received a plaque, honoring their father into the Wrestling Monthly Wall of Fame.

The video quality is amazingly clear and the sound superb, given the age of the footage. That’s what makes the match between Mad Dog Vachon and Jean Ferre (Andre the Giant) so much fun to watch. Vachon gives away 200 pounds to the 24-year-old Andre the Giant, weighing in an announced 415 pounds in this classic battle in the early years of Andre’s career.

The television footage from Lutte International has also held up quite well, featuring some of the most out-of-control bouts to come out of Eastern Canada in this era, with Dino Bravo and Rick Martel battling The Masked Superstar and Sailor White in singles matches, a bloodbath between Abdullah the Butcher and Bruiser Brody, and a series of wild brawls between the Rougeaus and the Garvins that culminate in a violent and vicious Loser Leaves Town Match.

Some of the highlights of Volume 1 include a “Strongman Showing” by the Canadian lumberjack Jos LeDuc, where 12 men from the audience are strapped to his biceps in an impressive test of strength, along with a historic cage match — International Wrestling’s last match in Quebec — between Abdullah the Butcher and Gino Brito, a fitting closing to the four-hour Volume 1 disc.

Volume 2 digs even deeper into Montreal’s past with promoter Eddie Quinn, and a series of early matches in the careers of Mad Dog Vachon, Killer Kowalski, and Argentina Rocca.Kicking off the DVD is a wildly entertaining bout — again, the footage is amazingly clear — between Wild Bill Curry and Ovila Asselin, who starts the match by dropkicking Curry off the ring apron, over the gate and deep into the well-dressed audience (not a common sight nowadays).

Mad Dog Vachon versus Larry Moquin is technically impressive until things turn dirty, while Argentina Rocca’s dropkicks against Kowalski are a thing of absolute beauty.

Much of the fun from these DVDs comes from the colourful intros and the music of programs like Grand Prix Wrestling and Professionels de la Lutte du Quebec. The interview footage is top-notch as well, with many in English, like the one of Don Leo Jonathan warning The Sheik of an upcoming bout, after a blind-sided attack in Ottawa.

“There is going to be a lot of blood this time,” Jonathan calmly states, with his powerful screen presence.

There’s also an insightful interview with Mad Dog Vachon and Tokyo Joe discussing the sleeper hold, and how American fans don’t understand the complexity of the maneuver and its origins in Japan.

A few ringside confrontations between the likes of Eddy “The Brain” Creatchman, Richard Chartrand, and Leo Burke are entertaining as well, along with a midget match featuring Sky Low Low and Tiger Jackson, and an early ’80s handicap match with Andre the Giant in front of a tiny crowd with just two rows of ringside seats.

Midway through Volume 2, the footage gets a bit rough (Hans Schmidt versus Le Bourreau) and snowy (Gino Brito and Tony Parisi versus Pat Patterson and Mad Dog Lefebvre) but the action is still watchable.Quality, clear footage returns quickly with fantastic bouts between Rick Martel and King Tonga, and Dino Bravo and Samu from International Wrestling, along with a grueling women’s match featuring Vivian Vachon and Christina Cortez, followed by an interview with AWA Women’s Champion Sherri Martel.

Some of the best early footage of The Road Warriors can be found on this DVD as well, when compared to videos of their runs in Memphis and Georgia from this era. Hawk and Animal tangle with Jacques Rougeau Jr. and Jos LeDuc in front of a red hot Montreal crowd. Nothing is more violent, though, than the back-to-back bloodbaths between Abdullah the Butcher and Jacques Rougeau Jr., which nearly spark riots.

As Volume 2 begins to wind down, Laprade and Hebert throw in a few rare treats, like a fiery confrontation between The Sheik and Yvon Laverdure, and Japanese star Toshiaki (Kawada) versus Pretty Boy Chuck Simms. There’s also a memorable match between Steve Strong and an enraged Rick Martel, who breaks a beer bottle over his own head (a very badass move for someone who would go on to portray the prissy Model gimmick).

As an added bonus, Laprade and Hebert bridge the past with the present with an IWS (International Wrestling Syndicate) three-way featuring Pierre-Carl Ouellet, Kevin Steen, and El Generico. Highly entertaining and fast paced, Steen and Generico work together early on, turning the bout into somewhat of a handicap match against the seasoned veteran, Ouellet.

Taking place in Le Skratch, a pool hall in Laval, Quebec, the match is packed with technical wrestling mixed with high flying action that often spills onto the floor. Steen, a 19-year-old student of Jacques Rougeau really shines in this one, as the commentators predict he and Generico both have bright futures ahead.It’s a fitting and fun way to end the journey, celebrating the history of pro wrestling in Quebec, and the indelible impact the Montreal territory made on the sport. Like the research they did for their book, Laprade and Hebert did a formidable job putting these DVDs together.

Don’t let the French-language content deter you if you’re an Anglophone — the action in the ring speaks for itself.