The Class of 2015 for the Professional Wrestling Hall of Fame has been announced, and there’s a decidedly Canadian flavour. Quebecers Rick Martel and Vivian Vachon are two inductees, plus Canadian icon Whipper Billy Watson is going in. Add to that Buddy Roberts of Vancouver, as a part of the Fabulous Freebirds in the tag team division, and maple syrup should be on the menu at the induction banquet.

But there are plenty more flavours as well. 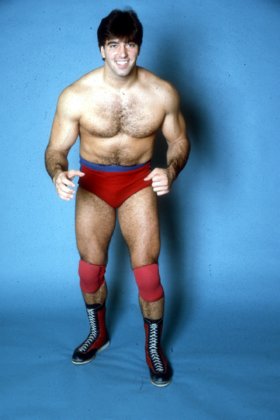 Rick Martel in his prime. Courtesy of the Wrestling Revue Archives

Pedro Morales, former WWWF World champion, is originally from Culebra, a small island off the east coast of Puerto Rico. As a teen, he moved to New York City and became a storied pro wrestler in 1958, especially with his runs in California and in the WWWF, where he reigned as champion from 1971 to 1973. He is entering the PWHF in the Television Era, which spans from 1943 to 1984.

Also going in the Television Era division is Whipper Billy Watson, who is easily the best-known Canadian professional wrestler of all-time. Like Gorgeous George in the United States, Watson was credited with selling many television sets as the technology was in its infancy. Besides his runs on top of the world as NWA champion, Watson was involved in the promotions in Toronto and St. Louis, and is famed for his charitable works. He died in 1990.

The late Jumbo Tsuruta, who died in 2000, was one of the greatest wrestlers ever from Japan, and enters in the International division. After competing for his country at the 1972 Olympic Games in Munich in Greco-Roman wrestling, he became a pro wrestler. To fans in North America, Tsuruta is best known from his 1984 AWA World title reign. In 1989, Tsuruta became the first Triple Crown Heavyweight champion (unifying the Pacific Wrestling Federation, All Japan United National and All Japan International titles).

In the Pioneer Era, The Great Gama is recognized as the greatest wrestler ever from India in a career that lasted 50 years. Joe Malcewicz began his career in the 1920s, and became known as the “Utica Panther” for his roots in upstate New York; he later became well known as the promoter in San Francisco.

The Modern Era (1985 – present) inductees, Curt Hennig and Rick Martel, both found success in the midwest’s AWA and in the nationally-run WWF. Martel followed his brother, Michel, into pro wrestling as a teen and was a quick study, his athleticism and his good looks propelling him to the top of the card wherever he worked — Portland, Hawaii, WWWF, Montreal, the AWA, Japan. He was AWA World champion from 1984 to 1985. An injury while working in WCW in 1998 ended Martel’s career.

Curt Hennig is the son of Larry “The Axe” Hennig and the father of WWE star Curtis Axel and retired female wrestler Amy Hennig. But to most fans, he was “Mr. Perfect.” Immensely talented at whatever he tried, the gimmick in the WWF was one that perfectedly suited the Minnesota native. He was AWA World champion from 1987 to 1988. Hennig died in 2003.

Like Hennig, for Vivian Vachon in the Ladies division, it’s all about family. Her big brothers, Mad Dog Vachon and Paul “The Butcher” Vachon are both already in the PWHF, and her niece, Luna Vachon, might follow one day. Vivian, who was also known as Diane, died in a car accident in 1991 alongside her daughter, Julie, when their vehicle was hit by a drunk driver.

The Tag Team division had better prepare for a shaking up with the induction of the riotous Fabulous Freebirds. Originally a pairing of long-time friends Michael “P.S.” Hayes (Michael Seitz) and Terry “Bam Bam” Gordy in Georgia, the team took off in the early 1980s as a trio when veteran Canadian grappler Dale Hey joined up as Buddy “Jack” Roberts. The Freebirds were rock stars in pro wrestling, life-loving party guys who could perform in the ring, and headlined in Texas and Mid-South especially. Gordy died in 2001 and Roberts in 2012.

For non-wrestlers, there is a Colleague category at the PWHF, and this year’s honouree is Jim Crockett Sr., who was the long-time promoter in Charlotte, North Carolina. Crockett’s promotion started in the 1930s, and his reach extended into minor league baseball and hockey in the area as well. His sons Jim Jr., David and Jackie, all worked in the wrestling business in various times as well. Crocket passed away in 1973.

This is the 14th induction class for the PWHF. The ballots are sent to a select group of Professional Wrestling Hall of Famers and their peers, along with a select few historians (this writer included). “Cowboy” Johnny Mantell was the head of the selection committee this year.

Induction weekend is May 15-16, 2015, in Amsterdam, NY. A meet and greet and a banquet will both take place on the Saturday, and tickets will be on sale in the new year. Dave Burzynski, who was manager Supermouth Dave Drason in the Detroit territory, will host the banquet. There is usually a wrestling show on the Friday night as well.