The Attitude Era is the most romanticized era in WWE history. And leave it to WWE to cash in on those feeling nostalgia. WWE Attitude Era: Vol. Two released on WWE Home video last week, following up on the 2012 release of WWE: The Attitude Era.

The three disc DVD set, that is also available on Blu-ray, clocks in at a over 5 and half hours. Unlike Volume One, this set does not have a documentary included, but there are several short interviews throughout the DVD that help set up matches or promos. 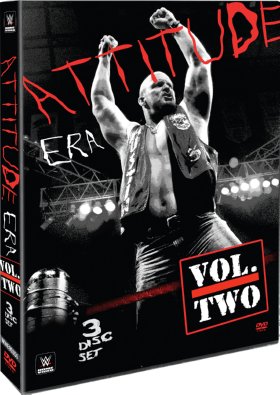 Michael Cole actually gives us a heads up of what to expect, although he did make it sound like there may be commentary from the participants during the match being shown, but alas we only get comments before some of the matches. The WWE needs to start releasing these discs with commentary from the wrestlers and writers as the watch their own matches, like the director’s commentary you find during movies. That would be a license to print money.

The DVD is presented in chronological order, spanning a little over three years from April 1997 to July 2000. The whole things kicks off with a staple of the Attitude Era, the bikini contest, and Sunny talking about being the first Diva to wear a thong on television.

Unfortunately, Volume One got to cherry pick the very best of the best when it came to this period of WWE history. Sure there are some good matches and promos, like the first match between Stone Cold Steve Austin and Vince McMahon and the DX takes New York segments, which probably wouldn’t even make air today. But we are also reminded of the not-so-great things that happened, like Mark “Sexual Chocolate” Henry going to sex therapy. Mark also makes the list with his whole story line of romancing Mae Young and having her give birth to a hand. Plus, WWE reminds us of story lines that were dropped without explanation. Remember when Kurt Angle kissed Stephanie McMahon? Sure, but do remember the fallout? You shouldn’t because there wasn’t any.

Various superstars of the era provide some insight, but it makes you wish there was more of these interviews. Did you know Gerald Brisco actually rejected one idea because of his weak stomach? And even though it’s a pretty well known story, Jerry Lawler tells us the origin of “Puppies”.

Shouldn’t everything on this DVD be on the WWE Network? You would think that, but the Network only has limited selection of shows from the Attitude Era on-line right now. And the DVD only has four pay-per-view match that are definitely available on the Network.

WWE Attitude Era: Vol. Two delivers on its promise. Even if they included and lot of eye rolling moments. If you are a big fan of the era it’s hard not to recommend this DVD set, especially since most of the match are not available on the WWE Network or if you don’t live in the United States and can’t get the WWE Network.

Lots of wrestling for the price

Most of the matches you can only find on the DVD

Superstars insights are informative and fun

Some moments should NOT be re-lived, see Mae Young and Mark Henry

Eventually everything will probably be on the WWE Network