Like almost every woman wrestler from the 1950s, Bonnie Watson’s road took her through Columbus, Ohio, and then to places far and wide, until it was time to settle down and raise a family.

Born on June 16, 1932 in West Union, West Virginia, she was athletic in school, but much of the promotional material on her during her career also mentions that she was a drum majorette at Doddridge High School and knew how to play the trumpet. 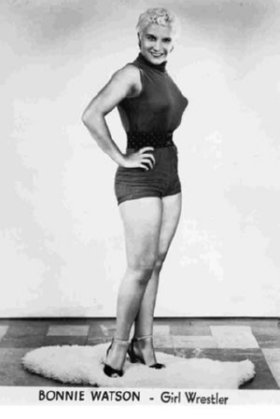 She was working for Ohio Bell when her world opened up and she fell into the clutches Billy Wolfe and his stable of woman wrestlers. Watson debuted in 1951, and hit the road. She listed Mexico, Cuba, Canada, Puerto Rico, and the Bahamas as countries she wrestled in when the Cauliflower Alley Club honoured her in a 1996 banquet in Tampa, Florida.

Initially, she was “Irish” Bonnie Watson, a “softspoken Irish lassie” with a head of red hair on her 5-foot-6-1/2 frame. A 1954 newspaper from Galveston, Texas, raved that Watson “has a figure that looks more like that of a movie glamour girl than that of a wrestler.”

By the middle of the 1950s, Watson had changed her hair colour, though generally remained on the side of good. One newspaper from 1955 praised her “blonde hair, olive skin and hazel eyes.”

The Albuquerque Tribune was enthralled by Watson and her partner Penny Banner in an August 1956 tag team bout: “With all the bouncing those bottle-blonde belles took, it’s a seventh wonder they didn’t explode. They didn’t, but by the end of the match their heads looked like frizzled chickens caught in an Albuquerque drizzle.”

Like all the wrestlers from Wolfe’s stable, Watson would pile in, four girls to a car, and drive from territory to territory. In those days, the women wrestlers did not get to “homestead” like the men, staying in a territory for months at a time. Instead, “Girl Wrestling” was a special added attraction to various cards across the continent, necessitating the travel.

In 1956, she met referee Stu Schwartz, and they were married a year later. That meant that Florida was Watson’s new base, and she would win the Southeastern championship, beating Judy Glover in Lake Worth, in November 1960, and continue wrestling on a part-time basis, even beating Ella Waldek for Florida title in St. Petersburg, in 1972.

Dotty Curtis, the widow of the late, great Don Curtis, got to know Stu and Bonnie in the 1960s in the Tampa area, and later the Curtises promoted Jacksonville and used both on the cards. They remained friends through the years.

Despite her successes in wrestling, Curtis said that Watson never really talked about her heyday.

“She was very proud of her wrestling career, but I just think that when he and Stu settled in the Tampa area and pursued other careers, there weren’t the legends luncheons and that, so you get away from things — and they did,” said Curtis, adding that Watson still had a couple of her old title belts. 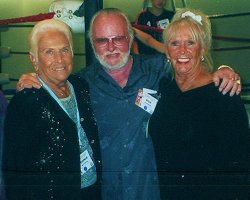 Wrestling Revue described Watson as “a big blockbuster of a gal, known for her strength and waterfront fighting techniques,” in its January 1970 issue. “When Bonnie Watson wrestles, she has a continual growl-like sound coming from her throat. … it’s enough to stand your hair on end … and as she smacks her opponent around, the growl gets deeper and louder.”

Watson retired from the ring in 1976, though did wrestle three more times, all in Alabama.

Schwartz and Watson, who had four children together, left Florida for North Carolina in 2007, but had to move back when both faced severe health issues — Schwartz had a stroke, and Watson had continual back issues for decades. They lived with one of their daughters, and Curtis saw first-hand the dedication husband showed to wife.

“He’s a jewel. I’ve never seen anybody in my life so dedicated to a woman,” Curtis said of Schwartz. “He was there for every need. He helped her dress, he fed her, he took care of the house, he did the shopping. He’s just a gem.”

While they lived in North Carolina, Schwartz and Watson did manage to attend a one of the fan fests in Charlotte. Curtis recalled arguing with her friend about her need to use a walker to get around. A chance meeting with one of the toughest men ever to walk God’s Green Earth changed her thinking.

“We turned the corner in the hotel, and just as we did, the doors opened to the elevator and out walks Harley [Race] and he’s got a walker — the same as hers. When she saw that, she relaxed, she wasn’t the only one,” recalled Curtis.

After many years of suffering, Watson had recently entered hospice care, and passed away early in the morning on August 21, 2014 at home. Funeral arrangements are pending. She is survived by her husband, Stu, four children, and numerous grandchildren and great-grandchildren.