With Father’s Day around the corner, there are certainly going to be plenty of dads looking forward to a weekend of combat sports. They’ll get their fill of MMA on Saturday with UFC 174; they’ll get professional wrestling on Sunday with TNA Slammiversary; and perhaps a bit of both, as Battle Arts Academy presents BattleArts: Genesis on Saturday in Mississauga. 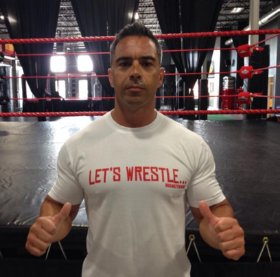 “Battle Arts itself is a strength and conditioning, mixed martial arts, boxing and pro wrestling academy,” said Battle Arts General Manager George Terzis. “We have a pro wrestling program. December was our first student-based show. We called it Rising Stars. The Rising Stars show is more of a North American pro wrestling style, which crosses over with WWE; that sort of thing. June 14 is our first Battle Arts show, which we call Genesis 1, because this is a new beginning for Battle Arts. Participants are hand-picked people that we’ve trained for this style. It is submission-based; striking-based; you win by a submission or a TKO.”

When it comes to professional wrestling, it should be no secret that Canada has produced some of the best grapplers and shooters in history. But Battle Arts was actually founded in Japan several years ago by Yuki Ishikawa.

“He’s (Ishikawa) a pro wrestler/MMA fighter. He’s trained under Karl Gotch, Fujiwara and the original Tiger Mask,” Terzis said. “Ishikawa opened up Battle Arts. He was the president and he was one of the main guys in there. The style is a grappling/striking style; it’s hybrid wrestling, very much close to the UWF or Pancrase, or mixed martial arts, like how it is today.”

Nobody can deny the originality and uniqueness of the Battle Arts Academy. It’s essentially a combination of pro wrestling and mixed martial arts, as Terzis explained, and it has certainly grown in popularity in its 18 years in existence. Naturally, it was only a matter of time before Canada wanted a part of this, and all it took was a professional wrestler to bring it here. That man’s name was Anthony Carelli, but most of his fans know him as Santino Marella.

“I trained with Battle Arts in Japan. And then a light bulb went off and I said, ‘This has to be seen in Canada,'” Carelli said. “This level of knowledge should not go to waste. I did everything I could, and got the paperwork going, and just tried to get it here as soon as possible. I used to be on a national judo team growing up, and I just loved grappling.”

Because his on-screen character is so entertaining, some people might overlook Carelli’s in-ring ability. Battle Arts provided him with the skills needed to get to that next level, and eventually land a WWE contract.

“Making people laugh is great, but this is my style of wrestling, and this is why I’ve brought it here and why I go to the shows,” Carelli said.

Carelli officially opened Battle Arts Academy in Mississauga, Ontario in September 2013, and hasn’t looked back since. In fact, he’s very hopeful that the company will continue to grow in the coming years.

“I would like to see Battle Arts be the pioneer of developing Canadian talent. We have certain guys that could be in the WWE, and certainly in NXT, so we’re working on that,” Carelli said. “We’re working on also getting a TV show. Once we’re out there, whether it’s online or a network, we’re going to show people what it takes to do this, and document it.”

It really seems like anybody who’s anybody wants to be involved with Battle Arts. The man who founded the academy in Japan, Yuki Ishikawa, currently serves as a head trainer at the new facility. And other pro wrestling legends occasionally stop by as well to discuss the differences and similarities between pro wrestling and other forms of combat. 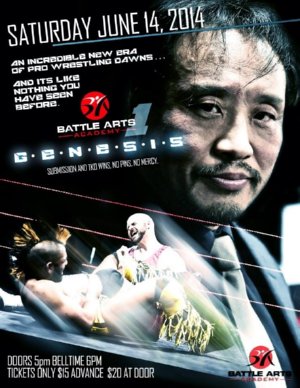 “Ric Flair was here on Saturday and he did a demonstration for about five minutes. Obviously, they (fans) were all here to see Ric Flair, and they were all pro wrestling fans, and everybody was standing on their feet,” Terzis said. “If you go back 30 years ago, a lot of pro wrestlers were shooters. If you wanted to be a pro wrestler, you had to know how to shoot; you had to know how to wrestle, or you weren’t going to make it. A lot of the business was really protected back then. It was supposed to be real; it was supposed to be like a gladiator sport.”

Saturday’s show is expected to be a huge success. This is mostly because there is such a wide range of talent on this one card. Hornet, who is one of the performers on the show, has wrestled internationally for 12 years, but has also trained in jiu jitsu and kickboxing. He’s very anxious to prove himself, but has also been eyeing some of the other talent on the card, including Ishikawa and Terzis, who will do battle with each other.

“Farhan Faruqui is one of the guys who will be competing. He is a very well-decorated amateur wrestler and has been on the mats with guys who have been in UFC. Yuki Ishikawa, who I did an exhibition match with last week, before Ric Flair’s appearance at the gym, has fought in Pride. And then there are guys who have been training in pro wrestling and different styles of shoot fighting only since September. These guys are all hungry and looking to prove that they are legit,” Hornet said. “I’m personally most looking forward to seeing the mix of styles matched up against each other. We will see guys who are more skilled at striking, going up against guys who are more skilled at submission wrestling. I see these guys train in separate classes, as well as together, so for me, I’m very excited to see them go at it, and see what happens.”

Fans are more than likely to get their money’s worth at Saturday’s event. Although some might want a little preview of what they can expect.

“There are rope breaks. You get five rope breaks and then on the fifth one, you either have to escape, or you tap out. In this case, it’s just one round; some are 20, some are 30, some are 60 (minutes). You either win by a referee’s decision, or a knockout, or stoppage, or a submission. There are no closed fists; there are open-hand strikes, there are elbows and there are knees allowed. Obviously no hair pulls, eye gouges. If you’re outside of the ring, it’s actually the same rules; you get counted,” Terzis said. “It is still a pro wrestling event/shoot. There really is a fine line between Battle Arts style and a shoot. It is reality; it is intense. If you’re watching, you wouldn’t know the difference; you’d have to ask yourself, ‘Is it real? Or is it not real?’ We like to keep it as real as we possibly can. It’ll be one round and it’ll be at the referee’s discretion; he’ll be the judge. You bring your discipline to the ring to find out who’s the best; so it’s boxer against wrestler. It will be a clash, so if one guy’s boxing and one guy’s wrestling, they will have to put their skills to the test.”