Angelina sure Loves being the Knockouts champion again

One could argue that the champion of a wrestling company should be able to cut the best promos, inspire audiences to either cheer or hate them, and, last, but not least, wrestle. If those are the indicators of the face of a pro wrestling company, then TNA has made the right choice by having Angelina Love regain its Knockouts Championship after a nearly two year absence from the company. 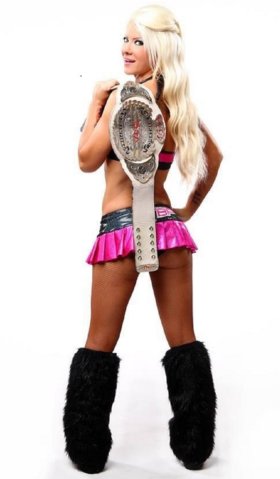 SLAM! Wrestling had a chance to sit down for an exclusive interview with the champ during its marathon TV and PPV tapings in Orlando in mid-May, after she had not one, but two matches in one night. Meeting her in an empty dark backstage lot at night, with a chained fence, and just one TNA official to keep us company, might be a setting more conducive to the monster, Abyss. But considering Love’s in-ring ability, the steel cage-like setting is perhaps symbolic of her style: she is a beautiful brawler.

This proud Canadian is very humbled by the experience of once again holding the Knockouts Championship. “It’s a heck of an honor [to become] the six-time Knockouts champion,” she says. Nothing was handed to her on a silver platter, however. “I worked very hard to get where I’m at, and been through a lot.”

Being away from TNA’s Knockout Division, a company that she helped put on the map, left a hole in the hearts of not only the fans, but Love herself. When asked what it was like being back in IMPACT! Wrestling after a long absence, and what was different about winning the belt this time around, Love pauses for a moment to reflect before she answers. She picks up the championship belt that she had placed next to her, and holds it with great reverence for the duration of her interview. “I didn’t throw a huge celebration the moment that I won it because I was so emotional,” she admits. “Getting the belt again and holding it again meant so much.”

Asked what she had been up to before her triumphant return to IMPACT! Wrestling in 2014, she mentioned that she has kept busy with a variety of projects.

“While I was away, I was really busy. I went up to Canada and starred in a TV show, Dark Rising Warrior, and it was super fun,” she says, among doing other non-wrestling activities. This was not Love’s first foray into acting, since she has starred in a number of projects over the past few years, including an indy film called Good Intentions, making a positive impression on those who worked on that LeAnn Rimes project.

Just like The Rock, though, she couldn’t stay away from pro wrestling for too long. TNA’s loss was Shine Wrestling’s gain. “I had a great time in Shine and I know all of those girls,” Love says about the Tampa-based all-women’s wrestling promotion. “They were great shows, always run well, and we all had great fun.” Sticking with Shine, she says “there is a ton of talent” there. Her words ring true since many Shine wrestlers were part of TNA’s Knockouts Knockdown PPV, which was taped in May at Universal Studios. One of the best wrestling matches SLAM! Witnessed that week — regardless of gender — featured Shine-alumnus and newest IMPACT! Wrestling Knockout, Brittany (a.k.a. Santana Garrett) versus Shine star, Mia Yim.

Although Love is currently based in the U.S., she is still well-versed with Canadian affairs — she even offered her thoughts on the upcoming Ontario election, her home province. While the realm of pro wrestling is normally dominated by right-wing conservatives, such as JBL, Love positions herself more on the center-left. And although she hasn’t followed the Ontario political drama of the past month, she reveals, “When I do vote, it’s always been Liberal.”

One Canadian political story bothers her greatly. “The idiocy of Rob Ford is the only Canadian news I hear about here in the U.S., and it’s embarrassing to me, as a Canadian,” she says while shaking her head. When this reporter jokes with her about Toronto mayor Ford becoming an honorary member of The Beautiful People, Love is not amused. “Absolutely not!” she says with a scowl. “Cleanse Canada of Rob Ford!”

One hopes better Canadian stories get out there, including a likely dream wrestling match pitting two Canadian wrestling icons against one another at TNA Wrestling’s Slammiversary PPV on Sunday, June 15th: The Knockouts champion, Angelina Love, versus fellow Torontonian Gail Kim. The match is expected to become official on Impact this Thursday.

“I’m looking forward to facing Gail again, who is an amazing competitor,” Love says, putting over the first ever Knockouts champion.

No matter who wins between the two at Slammiversary, Canada will come out on top. Our interview time up, she thanks the Canadian fans for supporting her over the years, whether she was in or out of IMPACT! Wrestling. But it seems that IMPACT! Wrestling and Angelina Love are a match made in heaven. Still clutching the Knockouts title with an almost holy reverence, she says with pride, “I love representing the company and being able to show just how passionate I am about what I do.”